NRS 484B.113 makes it a civil infraction to back up a vehicle in an unsafe manner. The civil penalty in Las Vegas is $205, and the Nevada DMV adds 2 demerit points to the defendant’s driver’s license.

However, it may be possible to get the charge reduced or dismissed through the following defenses: 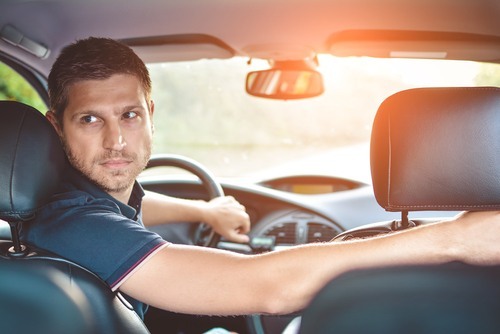 Backing up in an unsafe manner is a civil infraction in Nevada.

1. When is backing up a vehicle illegal in Nevada?

In short, drivers may not drive in reverse until they yield to everyone else and can execute the backing up safely.

Example: Ned is stuck behind a slow-moving car on a one-lane road in downtown Las Vegas. Since there is no one behind him, Ned decides to back up to the previous intersection and turn onto the cross street. A cop sees Ned backing up into the intersection and tickets him for violating NRS 484B.113.

Note that it makes no difference in the above example that Ned did not cause an accident and that there was no other traffic.1

Defense strategies are always fact-specific and unique to the case. Some typical arguments to fight NRS 484B.113 charges on the merits include:

2.1. The backing up did not violate the law

Sometimes the police make mistakes and think they see a traffic violation that never occurred: Perhaps the driver backed up very near an intersection or crosswalk but did not actually enter it. Maybe it seemed from the cop’s point-of-view that the driver did not yield to others when in fact the driver did. And sometimes, what is considered safe or unsafe backing is subjective.

A defense attorney in this situation would search for all available evidence, including surveillance video and eyewitness testimony, to dismantle the prosecutor’s case.

2.2. Backing up was the only reasonable option

The roadway is a very contentious place where drivers often accuse each other of bad driving. And in many of those cases, the accused did nothing illegal.

The defense attorney’s job is to gather as much evidence as possible (such as surveillance video, smartphone video, or witnesses) in an effort to discredit the accusations. If the prosecutor sees that the state’s case is too weak, the case should be dismissed.

The City of Las Vegas fines drivers $205 for unsafe backing.3 But every city and county has different fines. For example, the City of Reno charges $115.4

Usually yes. Though judges are more likely to grant a charge reduction to defendants with no or few past traffic violations.

If the defendant’s case is particularly strong, the defense attorney may even be successful in getting the charge not merely reduced but dismissed.

Improper backing up of a vehicle carries two (2) demerit points.5 The Nevada DMV removes demerit points from driver’s licenses after one full year.

Getting twelve (12) demerit points causes an automatic driver’s license suspension of six months. The only way to contest this suspension is through a DMV administrative hearing, which is similar to a small-scale trial.6

Yes, moving violations do result in car insurance rate hikes. But if the defense attorney succeeds in getting the charge reduced or dismissed, there should be no premium increases.

Judges typically do not require traffic school for unsafe backing, just a fine. However, the prosecutor may agree to reduce or drop the charges if the defendant completes traffic school.8

If 90 days pass without you paying a ticket, you can be assessed an additional monetary penalty. Plus the court can order that your license be suspended.9

The defendant’s commercial driver’s license will have two (2) points added to it. And the driver is given 30 days to inform his/her employer about the ticket.10

In depends on the state, so consult with a local lawyer familiar with traffic law. In most cases, the DMV will impose the same penalties that it would if the unsafe backing occurred in that state.

Unsafe backing is a civil infraction, so it does not appear on criminal records. (If you do not pay the ticket, then a civil judgment may show up on your record.)

If you had a misdemeanor conviction before January 1, 2023, then you can seek a record seal one year after the case ends. Dismissed charges can be sealed right away.11

Your DMV driving record does display all your traffic infractions. These are not sealable.12

No. The list of deportable offenses does not include small traffic citations like unsafe backing. But out of an abundance of caution, immigrants are advised to seek out legal counsel to make sure their resident status will not get affected.

It usually pays to fight. Chances are, the prosecutor will extend a favorable plea deal without much resistance. And the extra time it takes to challenge a ticket is worth the possible benefits of zero demerit points and no car insurance consequences.

Yes, you can request a hearing if you wish to contest the citation.13

16. If a driver causes an accident, can I file a lawsuit?

Most personal injury cases settle without going to trial. Our Las Vegas car accident attorneys would try to negotiate the largest financial settlement possible to cover the defendant’s:

If the defendant refuses to offer a good settlement, however, our attorneys will take the matter to trial in pursuit of the largest compensatory damages and punitive damages the court can award. Even if the victim may have contributed to the accident, he/she may still be eligible for substantial money damages. Learn more about our Las Vegas personal injury attorneys.

For a consultation, call our Las Vegas criminal defense attorneys. We may be able to get your charges reduced or dismissed with no traffic school, demerit points, or insurance rate increases.