The penalty in Las Vegas for failing to yield to a tow car is $395 in fines and four (4) driver’s license demerit points in Nevada. In practice, however, Nevada judges are usually willing to reduce charges to a non-moving violation or possibly a dismissal.

Some people may be tempted to ignore a traffic ticket for failing to decrease speed for a tow car because it is a relatively minor offense. But Nevada judges are quick to issue bench warrants to anyone who continues to miss court or fine payments, even if the person has no prior criminal record.

In this article, our Las Vegas traffic ticket attorneys answer frequently-asked-questions about failing to yield to a tow car in Clark County and throughout Nevada. We discuss defenses, punishments, demerit points, record seals, and immigration consequences. Click on a topic below to jump directly to that section:

If you have been injured by someone failing to yield to a tow car, you may have legal recourse to recover hefty monetary damages. Contact our Las Vegas personal injury attorneys to learn more. Also see our related article on failure to yield to a cyclist. 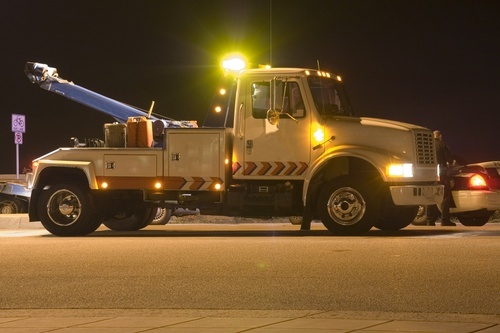 There is a duty to yield to stopped tow trucks with flashing lights in Nevada.

1. Is “failing to yield to a tow car” illegal in Nevada?

Yes. When there is tow truck parked and flashing amber warning lights, any approaching drivers are legally required to do the following:

In sum, Nevada drivers are legally obligated to slow down and if possible yield the lane to a parked tow truck that is flashing amber warning lights. And if there is a peace officer directing traffic, the driver needs to follow his/her direction.1

Also see our related article on failing to yield to emergency vehicles.

2. How do I fight charges for “failing to yield to a tow car”?

Many Nevada traffic cases resolve quickly. But if the case does proceed to litigation, the best way to fight traffic charges on the merits is with convincing evidence, such as:

Realistically, traffic cases rarely have much evidence aside from the police report, which is inherently biased. But the prosecution has the burden to prove guilt beyond a reasonable doubt, which is a high bar. If the defense attorney can persuade the attorney that the D.A. has insufficient evidence to sustain a conviction, the case may be dropped.

3. What are the penalties for “not yielding to a tow car” in Las Vegas, Nevada?

In the city of Las Vegas, the fine is $395. That fine may be doubled if it happened in a work zone. (Learn more about Nevada work zone penalties.) Note the exact fine varies from county to county.

This offense is a misdemeanor, which carries up to $1,000 in fines and/or up to six (6) months in jail. But it is exceedingly rare for a judge to impose jail in a minor traffic case.2

Four (4) demerit points, which then remain on the person’s driver’s license for one (1) year. If a driver’s license ever gets twelve (12) points, the Nevada DMV will suspend it for six (6) months.3

When a person’s driver’s license is suspended in Nevada, he/she can request a DMV hearing. Like a trial, a DMV hearing is where the defendant can introduce evidence, testimony, and arguments contesting the suspension. And as with a trial, defendants are advised to hire an attorney to handle everything.

People who have their license suspended are advised not to press their luck and drive anyway. Cops on the road randomly run people’s license plates and pull over people who are driving with a suspended license. These drivers then face the misdemeanor penalties of up to six (6) months in jail and/or up to $1,000 in fines.4

6. Will my car insurance rates go up?

Yes. But if the driver’s attorney succeeds in getting the citation lessened to a non-moving violation, there should not be any insurance consequences (in most cases).

The judge usually does not order it. However, a defendant may elect to do Level 1 Nevada Traffic school because the judge will usually reduce the charge to a non-moving violation afterward. And unlike a failure to yield violation, non-moving violations carry no demerit points.5

People with bench warrants can be arrested at any time and jailed indefinitely until the traffic case is resolved. Furthermore, the Nevada DMV may suspend the licenses of people who fail to appear at court.

If someone has a bench warrant in Nevada, it is recommended that he/she hire an attorney right away to try to quash (recall) the warrant and to get an “FTA clearance” to reinstate the person’s license. In most cases, the attorney can appear before the judge to get the warrant quashed without the defendant having to show up and risk arrest.6

The Nevada DMV puts four (4) demerit points on a person’s commercial driver’s license (CDL) for failing to decrease speed for a tow car. They CDL-holder will also have to tell his/her employer about the traffic violation within thirty (30) days of the citation.7

It depends on that state’s individual DMV rules. Chances are the Nevada DMV will inform the defendant’s home-state DMV about the charge, and the home-state DMV will penalize the person as if he/she failed to yield to a tow vehicle in that state. It is advised that out-of-state defendants seek legal counsel in their home state to discuss driver’s license issues.

11. When can I seal a conviction for “failing to yield to a tow car”?

Following a conviction for failure to yield to a tow truck, the defendant can seek a record seal once one (1) year has passed.8 But there is no waiting period if the charge was dismissed or the defendant was acquitted at trial.9

No, most traffic violations are not deportable crimes. Nonetheless, immigration law is constantly changing, and non-citizens facing even minor charges should arm themselves with an attorney to oversee their case.

Nevada courts do not penalize defendants for challenging a traffic ticket, so defendants have nothing to lose and everything to gain by fighting it. Chances are the D.A. will agree to reduce the charge to a non-moving violation, which would relieve the defendant of getting demerit points.

Yes. People charged with failing to decrease speed for a tow truck in Nevada may demand a bench trial (where a judge hands down the verdict) but not a jury trial. Courts rarely see traffic trials, though, since most of these cases settle.10

No, but please consider safeguarding your rights with legal representation. Having an attorney will not only raise a defendant’s chances of getting a better plea deal but also relieve the defendant from ever having to appear in court. This is an invaluable asset to defendants who are tourists who live out of town or Nevadans who have day jobs.

Whereas most criminal cases take months if not longer to conclude, most traffic ticket cases in the unincorporated section of Las Vegas can resolve within a few days. Las Vegas Justice Court holds biweekly “attorney sessions” on Tuesdays and Thursdays for the singular purpose of having defense attorneys and prosecutors negotiate traffic tickets in a matter of minutes.

Were you ticketed for now slowing down for a tow car in Clark County, Washoe County, or elsewhere in Nevada? Take advantage of our consultation with our Las Vegas criminal defense attorneys by calling today. Our team of lawyers has decades of combined experience in fighting traffic tickets in pursuit of the lowest fines, no demerit points, and no traffic school.

If you were injured because another person did not slow down for a tow car in Nevada, you may be able to claim a large financial settlement even if you take some of the blame. Our Las Vegas car accident attorneys will do everything to get you all the compensation available to cover your medical bills, pain and suffering, lost wages, and lost future earnings. And in most cases, we do not have to go to trial to get you paid.