Are seat belts required in Nevada? (2022 UPDATES IN DESCRIPTION BOX)

Under NRS 484D.495, driving or riding in a motor vehicle in Nevada without wearing a seat belt carries a maximum $25 civil penalty and no Nevada demerit points. Meanwhile, a first-time offense of not properly securing a child in a car seat in Nevada carries a maximum $500 fine or 50 hours of community service.

Nevada police are not permitted to initiate a traffic stop merely for a seat belt violation: The car either has to be stopped already, or the police must have pulled the car over for committing another “primary” crime.

In this article, our Las Vegas traffic ticket attorneys answer frequently-asked-questions about not wearing seat belts in Clark County and throughout Nevada, including potential defenses, possible sentences, demerit points, record seals, and other information. Click on a topic below to jump directly to that section:

If you have been injured by a faulty safety belt, you may be able to recover large money damages. Contact our Las Vegas personal injury attorneys to learn more. 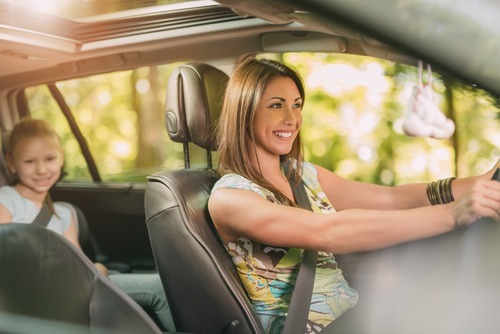 Nevada police are not permitted to pull over people simply because they are not wearing a safety belt.

Yes. Safety belts are required for both the driver and any passengers in vehicles weighing less than 10,000 pounds (which includes sedans, SUVs and taxis). Typical safety belts include laps, sashes, or harnesses.

Even though safety belts are mandatory, Nevada police may not pull over drivers solely because someone is not wearing a safety belt. Instead, the police may issue a seat belt citation only if:

Note that people may ride upon the bed of a flatbed truck…or within the bed of a pickup truck…without a safety belt if the person is:

There are special safety belt rules in Nevada for children who are under six (6) years old and under 57 inches tall. When being transported in a motor vehicle in Nevada, the child must be secured by a child restraint system that:

A child restraint system comprises such devices as:

Note that these rules do not apply to transporting a child on public transportation, or when the driver has a signed doctor’s note saying that a child restraint system would be impractical or dangerous for the particular child.

Also note that in extreme cases, a person who does not properly secure a child in a car seat may face child endangerment charges. Nevada defines “child endangerment” as knowingly placing a minor (under 18) in a situation that may harm his/her physical or mental well-being. The punishment ranges from small fines to several years in Nevada State Prison depending on the severity of the case.3

2. How do I fight charges for not wearing a seat belt in Las Vegas, Nevada?

The best strategies for defending against safety belt charges depend on the specific facts of the case. Just some common defenses include:

And sometimes the defendant was wearing a safety belt and the police simply did not see it. Typical evidence that may come into play in these cases includes surveillance video, photographs, and eye-witness testimony.

3. What are the penalties for not wearing a seat belt in Las Vegas, Nevada?

Drivers or adult passengers who do not wear safety belts face a civil infraction penalty of up to $25 or community service. (This is not a misdemeanor.)

Allowing a child passenger to travel without a seat belt also carries a civil penalty of up to $25 or community service if the child is at least six (6) or 57 inches or taller. Note that if both the driver and that child are not wearing safety belts, the police may issue just one citation for both violations.4

Punishments are a little harsher for drivers who wrongfully allow people to ride in the back of a pickup. The civil penalty is $35 to $100.5

The punishment for not driving a child in a proper child restraint system gets steeper with each successive conviction.

4. Can I get a seat belt charge dismissed in Las Vegas, Nevada?

It is possible. Often it depends on the available evidence, the prosecutor assigned to the case, and the defendant’s criminal history.

5. How many points will not wearing a seat belt put on my driver’s license in Las Vegas, Nevada?

The Nevada DMV will not add any demerit points to a person’s driver’s license for not wearing a safety belt or failing to secure a child passenger. The is because failing to wear a safety belt is considered a non-moving violation.

But note that the DMV will impose one (1) demerit point if a driver improperly transported someone in the back of a pickup truck. And the DMV will suspend a person’s driver’s license following a third-time offense of not using a proper car seat.7

Driving on a suspended license carries up to six (6) months in jail and/or up to $1,000 in fines. It is possible to fight a license suspension by requesting a Nevada DMV hearing. DMV hearings are similar to trials, and it is recommended that the license-holder hire an attorney to appear for him/her.

6. Will not wearing a seat belt in Las Vegas, Nevada affect my car insurance rates?

Usually no, but every insurer has its own rules.

7. Will I have to do traffic school?

No. But people convicted of not transporting a child in a proper safety restraint (car seat) can elect to complete an education course in exchange for reduced penalties. See question 3.

Once the judge issues a bench warrant, the Nevada DMV may suspend the person’s license. In that case, it is advised that the defendant hire an attorney to try to recall (“quash”) the warrant and reinstate the license.8

The Nevada DMV treats commercial driver’s licenses (CDLs) and regular driver’s licenses the same. Merely failing to wear a safety belt carries no demerit points on the person’s CDL, but letting someone unlawfully travel in the back of a pickup carries one (1) demerit point. See question 5 for more information.

Contact an attorney in your home state. Every DMV has its own rules and regulations.

11. When can I seal a violation for not wearing a seat belt in Nevada?

Safety belt violations are not deportable crimes. However, immigration law is in a precarious state. Non-citizen defendants are always encouraged to seek experienced legal counsel. Learn more about the criminal defense of immigrants in Nevada.

13. Should I fight my citation or just pay the civil penalty?

Defendants who were falsely accused should always consider fighting the case. But this is such a minor violation it may be worth it just to pay the civil penalty. Consult with an attorney.

Most safety belt cases settle quickly. But theoretically, anyone charged with a seat belt violation can request a bench trial, which is where the judge decides guilt or innocence. These defendants do not have the right to a jury trial.11

At least consult with one. Depending on the unique facts of the case, it may be a good idea to have legal counsel trying to negotiate a dismissal of the charge.

If the ticket was issued within Las Vegas’s unincorporated city limits, the defendant’s attorney can meet with a prosecutor at one of Las Vegas Justice Courts biweekly “attorney sessions” to try to hammer out a deal. These sessions typically occur on Tuesdays and Thursdays.

Were you or a loved one harmed in Nevada because of a defective safety belt? Our Las Vegas car accident attorneys will fight to recover money damages to pay for all your medical bills, pain and suffering, lost wages, and loss of future earnings. And you pay us nothing unless we win. (For cases in California, please visit our page on Vehicle Code 27315 – Callifornia’s law on mandatory use of seatbelts.

Should I Take a Breath or Blood Test if I am Pulled Over for a DUI in Nevada?