Passing a stopped school bus that is displaying flashing lights is a misdemeanor in Las Vegas carrying a $305 fine and four (4) Nevada driver’s license demerit points for a first-time offense. Subsequent offenses carry higher fines as well as a mandatory driver’s license suspension.

In many cases, Nevada charges for failing to stop for a school bus can get reduced to a non-moving violation or dropped altogether. Typical defense strategies are:

People who get charged with violating NRS 484B.353 are strongly advised to hire an attorney to fight the charge. At the very least, defendants must not ignore their tickets or else a judge may issue a bench warrant for their arrest. 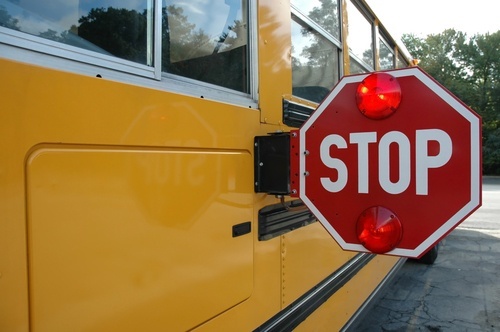 Passing or school bus that has come to a stop and is displaying a flashing stop sign is a misdemeanor.

1. When to stop for school buses in Nevada

Drivers must stop and wait whenever they see a school bus ahead of them that:

The drivers must then remain at a stop until the bus ceases the flashing red signal.

Note that vehicles on both sides of two-way roads are required to stop for a school bus except if the road is a divided highway. (See section 1.1 below for more information.)

Obviously, the purpose of NRS 484B.353 is to prioritize children’s safety and prevent cars from colliding children who may not be paying attention to traffic.

Drivers on a divided highway do not need to stop upon meeting or passing a school bus which is positioned in the other roadway. A “divided highway” means a highway divided into two or more roadways by means of a physical barrier or dividing section, constructed to prevent the conflict of vehicular traffic traveling in opposite directions.

Also if there is a traffic officer on the scene, the officer’s commands take precedence. So if an officer is signaling a vehicle to pass a stopped bus, the driver may do so.1

Drivers prosecuted for passing a stopped school bus have various possible defenses to try to combat the charges, including: 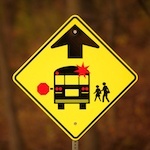 Sometimes drivers are falsely accused of failing to stop for a school bus.

2.1. The school bus did not display a flashing red stop sign

The law requires drivers to stop for a school bus that is displaying a flashing red stop signal. Perhaps the police officer mistakenly believed the signal was displayed when in fact it was not. If the defense attorney can present video surveillance or eyewitnesses that show that there was no stop sign, the NRS 484B.353 charge may be dropped.

2.2. The driver behaved reasonably in an emergency

School bus stops are often chaotic scenes of children running carelessly. Sometimes, a situation may arise where the only way a driver can avoid an accident is to drive past a stopped bus.

In Nevada civil cases, the “sudden emergency doctrine” allows defendants to escape liability for causing injuries if their actions were reasonable in the emergency situation.2 A similar argument may relieve defendants from criminal liability as well. If the defense attorney can make a convincing argument that any reasonable driver in the defendant’s scenario would have overtaken a stopped school bus, the NRS 484B.353 charge might be dropped.

2.3. The driver was falsely accused by another motorist

It is not uncommon for drivers to wrongfully accuse each other, either out of road rage or a genuine misunderstanding. Sometimes, children falsely accuse adults without realizing the gravity of their lies.

In these “he said, she said” scenarios, having eyewitnesses or video of the incident could help weaken the state’s case against the driver. If the D.A. cannot produce enough evidence to show that the defendant failed to stop for a school bus, the defendant should escape conviction.

3. Penalties for failing to stop for a school bus in Las Vegas, Nevada

The punishment for passing a stopped school bus in Nevada grows harsher with each successive conviction:3

In the City of Las Vegas, the fine for a first-time offense of passing a stopped school bus is $305.4 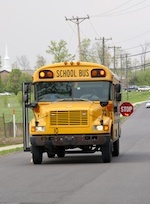 In many cases, an NRS 484B.353 charge can be reduced to a non-moving violation or dismissal.

The ideal scenario is always to try to get a case dismissed. But if the prosecutor refuses, the defense attorney can then try to get the NRS 484B.353 charge lessened to a non-moving violation through a plea deal.

The advantages of non-moving violations are that they carry no demerit point penalties, and they usually cause no automobile insurance rate increases.  As long as the defendant’s criminal record is not full of traffic violations, it is very probable that the D.A. will be amenable to a charge reduction.

A first-time offense of passing a stopped school bus will cause the Nevada DMV to tack on four (4) demerit points to the defendant’s driver’s license.5 Once a year has passed, the points will disappear. If a license ever accrues twelve (12) or more points, then the DMV will suspend the license for six (6) months.

Judges may or may not order that a defendant complete traffic school for allegedly failing to stop for a school bus. Either way, completing traffic school often serves as a surefire way to get the charge reduced to a non-moving violation. The advantage of non-moving violations is that they have no demerit point penalties, and car insurance companies usually will not increase rates.7

It is a common scenario for people to misplace their traffic citations and forget all about them. But Nevada courts always issue bench warrants for people who either fail to pay their fine or show up to court after a 30-day grace period.

A bench warrant gives police authority to take the subject of the warrant into custody at any time. Police usually do not go out and hunt down defendants accused of only a traffic violation. But if these defendants ever get pulled over and the police run their name, the police will then arrest them for having an outstanding warrant.

The process of getting a bench warrant recalled (“quashed”) involves three steps: 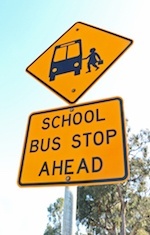 People who ignore their traffic tickets will have bench warrants issued for them.

As long as the defendant has no history of missing court, the judge will probably grant the motion and quash the warrant.8

The Nevada DMV treats commercial driver’s licenses (CDLs) the same as regular driver’s licenses. Therefore, the DMV adds four (4) demerit points to people’s CDLs as a penalty for not stopping for a school bus.9

Non-Nevadans who pick up traffic tickets in Nevada may face demerit point penalties from their home state’s DMV. However, this varies by state. Non-Nevadans should therefore contact an attorney in their home state to discuss what to expect and how to safeguard their driver’s license.

11. Sealing convictions for failing to stop for a school bus

If the prosecutor agrees to dismiss the NRS 484B.353 charge, then the defendant can petition the court right away to seal the record.10 But if the defendant ultimately gets convicted of failing to stop for a school bus, then there is a one (1) year waiting period after the case ends before he/she may pursue a record seal.11

The record seal process takes several weeks, but it is worth doing because having a clean record may give the defendant an edge when applying for jobs. Learn more about sealing criminal records in Nevada.

Violating NRS 484B.353 is not a deportable offense in Nevada. But with immigration law in a constant state of flux, non-citizens are encouraged to consult with legal counsel whenever they are facing criminal charges.

Even though not stopping for a school bus is technically a minor offense, it does not look good on background checks. Therefore, defendants are advised to hire an attorney to try to get the charge dismissed or reduced to a non-moving violation. Not only are non-moving violations less stigmatizing, they usually have no insurance and demerit point consequences. 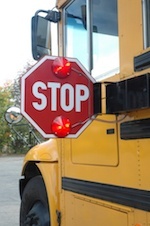 Anyone charged with violating NRS 484B.353 may demand a bench trial in Nevada.

Most people charged with a traffic violation have no interest in going to trial since a criminal defense attorney can usually get the charge reduced through negotiation. But if they wish, they can always demand a bench trial.

Bench trials are like jury trials except that there is no jury, and the judge is the one who hands down a “guilty” or “not guilty” verdict.12

Even though an NRS 484B.353 violation is just a misdemeanor, prosecutors take school bus-related cases very seriously and may not be initially willing to extend a favorable plea deal. But defense attorneys are skilled in negotiation and are much more likely to get the charge reduced or possibly dismissed than an unrepresented defendant would.

Other advantages of having an attorney include the following:

Parents of children injured by a driver who failed to stop for a school bus may be able to sue the at-fault driver for negligence per se. In order to win a negligence per se lawsuit at trial, the plaintiffs (victims) would need to prove the following:

Even if the child victims were partially to blame for causing the accident, the defendant can still be found negligent as long as he/she was at least 50% at fault.14 Our Las Vegas car accident attorneys always try to settle cases out of court in order to avoid the time of expense of a trial. Either way, we fight for as much money damages as legally permissible to cover the victims’:

Running a stop sign carries a $395 fine in Las Vegas as well as four (4) driver’s license demerit points. In many cases, the judge may lessen the charge to a non-moving violation with no demerit points.

Speeding in a school zone carries double fines. Therefore, a speeding ticket that may normally carry a $205 fine would double to a $410 fine if it happened in a school zone.

For a Nevada criminal defense attorney…

Are you facing criminal charges in Nevada? Then our Las Vegas criminal defense attorneys are here to help.

For California cases, please visit our page on Vehicle Code 22454a VC.