Speeding in a school zone in Nevada carries double fines. While a typical speeding ticket in Las Vegas may cost $205 to settle, a ticket for violating NRS 484B.363 would carry a $410 fine.

Unless the speeding caused an injury, prosecutors are often willing to lessen speeding charges to non-moving violations, which carry no Nevada driver’s license demerit points. But if a defendant fails to handle their traffic ticket case by missing court appearances or payments, the court may issue a bench warrant for the defendant’s arrest.

In this article our Las Vegas traffic ticket attorneys answer frequently-asked-questions about speeding in a school zone in Clark County and throughout Nevada. We discuss several issues including defense strategies, punishments, demerit points, record seals, and more. Click on a topic below to jump directly to that section:

If you have been injured by a speeding car, call our Las Vegas personal injury attorneys to learn more. You may be eligible for compensatory damages. 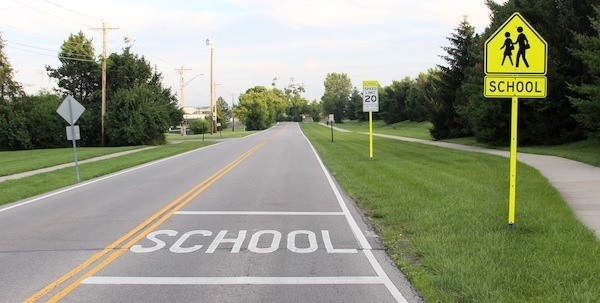 1. What are the laws for speeding in a school zone in Las Vegas, Nevada?

Speeding in school zones is not a distinct misdemeanor crime from speeding. Instead, it is an added penalty for the underlying speeding charge. But note that hitting a pedestrian or bicyclist while speeding is automatically charged as reckless driving.

Note that drivers are also not allowed to make a U-turn or to overtake and pass another vehicle in a school zone or school crossing zone.1

Also see our article on stopping for a school crossing guard in Nevada.

2. How do I fight charges for speeding in a school zone in Las Vegas, Nevada?

Charges for violating NRS 484B.363 should be dismissed if:

Note that “speed limit beacon” means a device which is used in conjunction with a sign and equipped with two or more yellow lights that flash alternately to indicate when the speed limit in a school zone or school crossing zone is in effect.

The defense attorney could also investigate as to whether the alleged schooling zone was even legal and followed all the rules. If the city failed to follow signage laws, the judge may be willing to reduce or dismiss the speeding charge.

For example, an area must not be designated as a schooling zone if imposing a speed limit of 15 miles per hour would be unsafe because of higher speed limits in adjoining areas…

2.2. The defendant was not speeding

Another defense is that the driver was not speeding, and the police simply mistakenly thought he/she was.

In crafting a defense strategy, the driver’s attorney would attempt to weaken the state’s case by compiling helpful evidence. This could include surveillance video, photographs, and eyewitnesses to show that the driver was going at a legal speed in the school zone.

3. What are the penalties for speeding in a school zone in Las Vegas, Nevada?

Note that speeding penalties vary from city to city and county to county. It is rare for judges to impose jail for speeding unless the defendant has an extensive criminal history.

In addition, the court may impose a maximum of six (6) months in jail.

But if substantial bodily harm or death results to the victim by the driver’s speeding, the driver faces charges for category B felony reckless driving. The sentence is one to six (1 – 6) years in Nevada State Prison and fines of $2,000 to $5,000.2

4. Can I get my charge reduced to a non-moving violation?

Maybe, especially if the driver has no or little traffic ticket history.

5. How many demerit points will go my Nevada driver’s license?

It may be possible to fight a license suspension at a Nevada DMV hearing, which is similar to a trial. Driving on a suspended license is a misdemeanor in Nevada: The penalty is up to six (6) months in jail and/or up to $1,000 in fines.4

6. Will my car insurance premiums increase?

Yes. But if the charge gets reduced to a non-moving violation or dismissed completely, there should be no insurance hike.

Usually not. But in some cases, suffering through traffic school is the only way the judge will agree to reduce the speeding ticket to a non-moving violation, which carries no demerit points.5

After a 30-day grace period, Nevada courts issue bench warrants when a person charged with a crime does not show up to court or does not pay a fine on time. People late on their payments should be given the opportunity to do community service instead of paying the fine; then if they fail to complete the service, a warrant may issue.

People with bench warrants may be arrested at any time.

It may be possible to get a bench warrant recalled: The defendant’s attorney would file a “motion to quash the warrant” and appear at a hearing in an effort to convince the judge to recall the warrant.6

Whenever a CDL-holder picks up a traffic ticket, he/she has a legal obligation to inform his/her boss within thirty (30) days of the ticket being given.7

It depends on a state, so out-of-state defendants are advised to consult with a home-state attorney.

A Nevada misdemeanor conviction for speeding or reckless driving may be sealable one (1) year after the case closes (not when the ticket is issued). Note that convictions for non-moving violations also have a one (1) year waiting period for getting sealing. And if the defendant was convicted of felony reckless driving, the waiting period is five (5) years after the case ends.9

If the speeding charge gets dismissed, then the defendant can try to get the record sealed right away.10

Speeding is not a deportable offense. But since immigration law is constantly changing, non-citizens facing speeding charges should still consult with an attorney to discuss how to protect their resident status. Read more about the criminal defense of immigrants in Nevada.

Fight it. Speeding tickets carry high fines and demerit points. If a defense attorney is able to get the charge reduced to a non-moving violation or dismissed, the defendant should have lower or zero fines and no demerit points on his/her license.

Sure, but nearly all speeding cases settle without a trial. Note that defendants facing only a misdemeanor charge are entitled only to bench trials, not jury trials. In bench trials, the judge decides the verdict and hands down a sentence.11

It is not necessary but highly encouraged. In practice, the D.A. gives better deals when the defendant has counsel. And in the vast majority of traffic cases, the defendant never has to go to court as long as he/she has an attorney appearing for him/her.

If you have been cited for exceeding the speed limit in Clark County, Nye County, or elsewhere in Nevada, call our Las Vegas criminal defense attorneys for a FREE phone meeting. We may be able to get the charge dropped or lessened to a non-moving violation with lesser fines and no demerit points.

If you have been harmed in a speeding accident in Nevada, our Las Vegas car accident attorneys may be able to secure you a settlement. Even if you contributed to the collision happening, you could still be entitled to compensatory damages for your medical bills, pain and suffering, and lost wages. You pay nothing unless we win your case.

Most people do not like the sight of litter. But did you know that in the state of Nevada, littering is not only a nuisance, is also a crime? There are local as well as state laws which prohibit the depositing of garbage and other unwholesome or hazardous materials on public and private property. Most ...