Fighting charges of "speeding in a work zone" in Nevada

NRS 484B.130 is the Nevada statute that doubles the fine for speeding in a work zone. So whereas exceeding the speed limit in Las Vegas may carry a $205 penalty, speeding in work areas would up the fine to $410.

It is often possible to reduce an NRS 484B.130 violation to a non-moving offense with no Nevada demerit points. The most important thing is that drivers not ignore their tickets. If they do, a Nevada judge may issue a bench warrant for their arrest.

In this article, our Las Vegas traffic ticket attorneys answer frequently-asked-questions about speeding in a work zone in Clark County and throughout Nevada, including defenses, punishments, demerit points, record seals, and more. Click on a topic below to jump directly to that section:

If you have been injured in a Nevada work area by a vehicle that sped, contact our Las Vegas personal injury attorneys to learn more. You may be eligible for large compensatory damages. 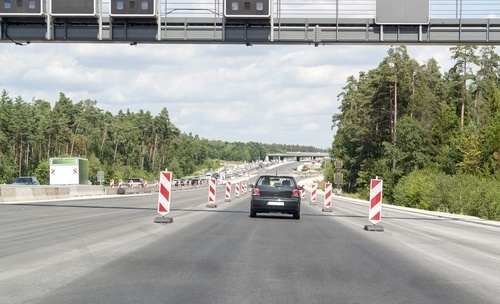 1. What are the laws for speeding in a work zone in Nevada?

In order for an area of the road to become a work zone in Nevada, government workers (or contractors) must erect three things:

It is rare that speeding ticket defendants have to fight the charges on the merits since most traffic matters settle pretty quickly to the defendant’s satisfaction. But in case things do progress to litigation, two common defenses to Nevada charges of speeding in a work zone are:

In building a defense, the driver’s attorney would try to compile surveillance video, photographs, and eyewitnesses to help show that the driver was not speeding in a school zone and that the state’s evidence is too insufficient and unreliable to sustain a guilty verdict.

Note that a lack of signs does not necessarily relieve a driver of criminal liability if the speeding caused $1,000 or more in property damage or injury to a construction worker.

It is very possible, especially for a first offense, a second offense, or possibly a subsequent offense for violating traffic laws. Having an attorney is usually the best bet for getting moving traffic violations reduced or possibly dismissed.

5. How many demerit points will go on my driver’s license?

Predictably, the Nevada DMV puts more demerit points on a person’s license the faster they speed:

Demerit points are not forever. They remain on driver’s licenses for only one (1) year before disappearing. But having twelve (12) or more demerit points will results in a six (6) month driver’s license suspension. So people with speeding tickets should consider trying to get them reduced to a non-moving violation, with carries no demerit points.5

For people whose licenses have already been suspended, it may be possible to get the license reinstated by having a DMV Hearing. A DMV hearing is like a trial, and there is an administrative judge who determines whether the person’s license was wrongly suspended. As with any judicial proceeding, people are encouraged to have an attorney appear for them at a DMV hearing.

6. Will my car insurance premiums go up?

Yes. Consequently, anyone charged with a traffic violation should consider trying to fight the ticket in pursuit of a charge reduction or dismissal.

People with outstanding bench warrants risk getting arrested at any time, especially if they get pulled over for a traffic violation.

In some cases, the Nevada DMV will suspend a person’s driver’s license for not showing up to court. When that happens, the defendant’s attorney can ask the court for an “FTA (failure to appear) clearance” to get the license reinstated.6

When a CDL holder gets a traffic ticket, he/she has to inform his/her boss within thirty (30) days of the citation being issued.7

Federal law considers it a “serious offense” for a CDL-holder to operate a commercial vehicle at 15 miles per hour or faster above the speed limit. A CDL-holder who commits two (2) such serious offenses within a three (3) year span will have their CDL suspended for 60 days. A third offense within a three (3) year period carries a 120 day CDL suspension.8

The consequences vary state-to-state. Seek out an attorney in the home state to learn how its DMV will penalize the person’s driver’s license for a Nevada traffic offense. In many cases, the home state DMV hands down the same demerit point penalty that if would if the offense transpired in the home state.

All Nevada speeding tickets can usually be sealed one (1) year after the case ends (not when the citation is issued). Convictions for non-moving violations also have a one (1) year statute of limitations for sealing.9

Note that if the defense attorney succeeds in getting the traffic case dismissed completely, then there is no waiting period to pursue getting a record seal. Whenever a case ends with no conviction, there is never a statute of limitations waiting period.10

Exceeding the speed limit anywhere is not a deportable crime. However, non-citizens who are ticketed for a traffic violation are still advised to meet with an attorney to help ensure that the case will not adversely affect their resident status. Read more about the criminal defense of immigrants in Nevada.

Although speeding is a low-level offense, it can carry hefty fines, demerit points, and insurance hikes. Therefore, we recommend at least consulting with an attorney to discuss trying to get the charge dropped or at least lessened to a non-moving violation.

Yes, but speeding ticket defendants are not entitled to a jury trial, just a bench trial. The prosecutor tries to prove the defendant guilty beyond a reasonable doubt. Then the judge (since there is no jury) will deliver a verdict of guilty or not guilty.

In Nevada, speeding ticket cases hardly ever go to trial since they are relatively minor charges: Eventually, the prosecutor and defense attorney come to a resolution that the defendant is happy with.11

Hiring private counsel is not mandatory, but it is encouraged: The D.A. usually extends more favorable plea deals to represented defendants than pro se (unrepresented) defendants. Attorneys have negotiation and litigation skills that increase the odds of getting a case dismissal or reduction.

Hiring an attorney makes life much easier for the defendant as well. Represented defendants do not have to come to court (barring extenuating circumstances), which is of vital importance to out-of-town defendants and tourists as well as to people who work during the day.

Twice a week on Tuesdays and Thursdays, Las Vegas Justice Court hosts “attorney sessions” where prosecutors and defense lawyers can meet to negotiate their traffic ticket cases. (Las Vegas Justice Court has jurisdiction over traffic citations that allegedly occurred within the unincorporated area of Las Vegas, which includes most of the Strip). These attorney sessions allow traffic tickets to be dealt with quickly, whereas tickets in other courts may take weeks if not longer to reach a resolution.

If you have been ticketed for driving too fast in a work zone in Clark County or elsewhere in Nevada, contact our Las Vegas criminal defense attorneys for a free consultation. Our law firm will do everything to try to get the citation dropped or lessened to non-moving violations so you pay the least, get no demerit points, and do no traffic school.

See our related articles about speeding in pedestrian safety zones (NRS 484B.110), reckless driving (NRS 484B.653) – driving in willful or wanton disregard of the safety of persons, which can be a misdemeanor or category B felony depending on the case, aggressive driving (NRS 484B.650), driving with an open container (NRS 484B.150), vehicular manslaughter (NRS 484B.657), illegal U-turns (NRS 484B.403), moped laws, overtaking a vehicle on the right side (NRS 484B.207), and laws for riding bicycles.

If you have been injured in a speeding accident in a work zone in Nevada, our Las Vegas car accident attorneys may be able to help get you a large settlement. Even if you partially contributed to the collision, you could still be eligible for compensation for your medical bills, pain and suffering, lost wages, and loss of future earnings. And unless we win you pay us nothing.

Is Not Paying Back a Casino Marker a Crime in Nevada?