People ticketed for running a red light in Las Vegas face a $305 civil penalty and four (4) Nevada demerit points on their driver’s license. But a defense attorney can often get the charge dismissed or lessened to a “non-moving” violation with no demerit points.

In this article our Las Vegas traffic ticket attorneys answer frequently-asked-questions about the failure to obey red lights in Clark County and throughout Nevada. Some of the issues discussed are defenses, sentences, demerit points, and additional pertinent information. Click on a topic below to jump directly to that section:

If you have been injured by a car that disobeyed a traffic signal, you may be entitled to hefty money damages. Contact our Las Vegas personal injury attorneys to learn more. 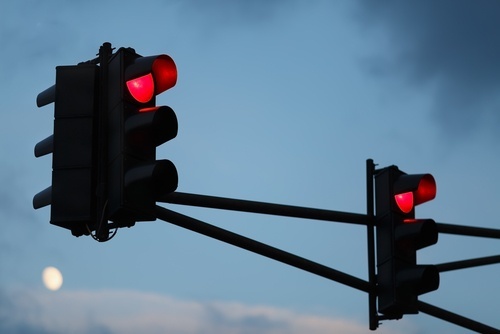 1. Is running a red light illegal in Las Vegas?

Yes. Disobeying a traffic signal is against Nevada law unless there is a police officer at the intersection directing traffic otherwise.1

Unless the incident resulted in a bad accident, Nevada prosecutors are usually willing to reduce NRS 484B.307 charges to a lesser offense. But if the prosecutor is unwilling to negotiate the charge down, the defense attorney can try to fight the traffic ticket on the merits.

Common evidence that may come into play includes eye-witnesses, surveillance video, and photographs. However, in some cases there is no evidence except for the police report claiming that the defendant disobeyed a traffic signal.

In the city of Las Vegas, violating NRS 484B.307 carries a $305 civil penalty. Every city and county imposes its own punishments, but the civil penalty is doubled if the traffic signal was in a work zone. Learn more about Nevada work zone penalties.

Unlike California, Nevada law does not have traffic “infractions.” Instead, running a red light is prosecuted as a civil infraction in Nevada. The maximum penalties are $500 in civil penalties.2

Nevada courts usually lessen charges for disobeying a traffic light to a non-moving violation, which has much lesser penalties. Scroll down to learn more. (For cases in California, please see our page on Vehicle Code 21453 VC).

Violating NRS 484B.307 will result in four (4) demerit points going on the person’s Nevada driver’s license. Demerit points remain on the license for one (1) year before disappearing.

If a person gets twelve (12) demerit points on his/her license, then the Nevada DMV will suspend it for six (6) months. Therefore, it is highly recommended that people who are issued traffic tickets to try to get them reduced to a non-moving violation carrying no demerit points.3

If the DMV does suspend a person’s driver’s license after a traffic violation, he/she can ask for a DMV hearing to argue against the suspension. As with a criminal trial, it is recommended that the person have a defense attorney appear at the hearing for him/her.4

6. Will my auto insurance rates to go up?

Yes, though every insurer is different. Obviously, people with more traffic violations will have steeper premium hikes. But if the citation gets reduced to a non-moving violation, the insurance company will probably not increase the rates.

Usually not. But in some cases, doing traffic school will reduce your case to a non-moving violation.5

You will be assessed a late penalty if you miss the deadline to pay. (You have 90 days to pay after the citation is issued.) Your license can also be suspended.6

The defendant’s home state DMV will usually issue the same number of demerit points that it would if the violation occurred in that state. Any out-of-state defendant charged with running a red light in Nevada is encouraged to get an attorney in his/her home state to handle the DMV aspect of the case.

Infractions are civil cases and not criminal cases. Therefore, they do not appear on your criminal record. (However if you neglect to pay the financial penalty, a civil judgment can show up on your record.)

Old misdemeanor-level convictions from before January 1, 2023 can be sealed one year after the case ended. Dismissed cases can be sealed immediately.8

Civil infractions do show up on your driving record, which is unsealable.9

Most traffic offenses are not deportable. But in light of the current administration’s policies, immigrants facing traffic charges are encouraged to hire an attorney to try to safeguard their resident status.

No, by all means try to fight the charge. More often than not, the judge will reduce the ticket to a non-moving violation. This saves the defendant from getting demerit points.

Yes. People accused of any traffic offense in Nevada are entitled to a hearing. 10

It is a good idea. In practice, prosecutors offer more favorable deals to defendants represented by private counsel. And private counsel is very skilled at fighting for lesser charges and case dismissals. Furthermore, private counsel can appear in place of the defendant without him/her having to show up–so for tourists and out-of-state defendants, hiring an attorney saves them an expensive and time-consuming trip to Nevada.

Are you facing traffic charges in Clark County or elsewhere in Nevada? Contact our Las Vegas criminal defense attorneys for help.

Were you in an accident caused by another driver disobeying a traffic signal in Nevada? You could be eligible for a significant financial reward to cover all your bills and much more. Even if you were partly at fault, our Las Vegas car accident attorneys will fight to get you the most generous settlement possible. We are also ready to go to a hearing if necessary.