NRS 484B.100 is the Nevada statute that makes it a misdemeanor to disobeying a traffic officer. The ticket carries 4 driver’s license demerit points. The fine in Las Vegas is $305, but it varies throughout the state. Traffic convictions must remain on the defendant’s criminal record for a full year before he/she can pursue a record seal.

Section 484B.100 reads that “It is a misdemeanor for any person willfully to fail or refuse to comply with any lawful order or direction of any police officer while the officer is performing the duties of the officer in the enforcement of chapters 484A to 484E, inclusive, of NRS.”

It may be possible to fight a charge on the merits for violating NRS 484B.100. Possible defenses include:

Even though traffic tickets are minor matters, judges do not hesitate in issuing bench warrants to people who blow off their tickets. So it is advised that traffic defendants hire an attorney as soon as possible to handle the case. 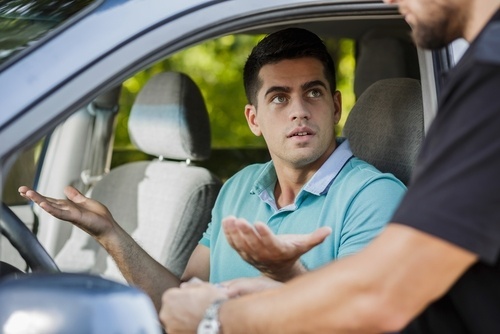 Las Vegas levies a $305 fine for disobeying a traffic officer.

1. Is it a crime to disobey traffic directions from a cop in Las Vegas?

Yes. Under NRS 484B.100, Nevada law makes it illegal to willfully refuse to comply with police when they give a traffic order. Even when the cop’s directions contradict traffic signs and signals, drivers are required to follow the cop’s commands.

Example: Howard is approaching a Las Vegas intersection where a traffic cop is holding a Stop sign and signaling with his hand to stop. Howard is in a rush, so he yields slightly but does not stop before continuing through the intersection. The cop signals to a colleague that Howard committed a traffic violation, and the colleague pulls Howard over and cites him for disobeying an officer (as well as for driving through a stop sign).

Note that it does not matter in the above example that Howard did not cause an accident by disobeying the cop. Nor does it matter that there is normally no stop sign at that intersection. Howard can still face prosecution under NRS 484B.100 for deliberately ignoring the cop’s order to stop.1

How best to defend against a charge of disobeying an officer turns on the facts of the case and the available evidence: Some common defense strategies are:

2.1. The driver did not act willfully

A driver violates NRS 484B.100 only if he/she “willfully” refused to comply with the police’s orders or directions.2 A driver is not acting willfully if:

Depending on the circumstances, valuable evidence for the defendant might include his/her medical records, car maintenance records, surveillance video, and eyewitnesses. As long as the prosecution’s case is too weak to sustain a guilty verdict, the charge should be dropped.

2.2. The driver was acting out of necessity

Occasionally drivers are faced with unexpected emergencies that force them to break traffic laws in order to avoid an accident. Perhaps a nearby car swerved unexpectedly. Perhaps there is dangerous debris on the road. Or perhaps there is inclement weather making driving conditions dangerous.

Either way, the driver is in the best position to judge what to do in order to escape a calamitous situation. And sometimes it is necessary to defy police to ensure their own safety.

In personal injury civil lawsuits, defendants are not held liable for damages caused by a traffic violation if the defendant reacted reasonably to an emergency situation. This is called the “sudden emergency doctrine.”3 Similarly, in criminal traffic cases, it may be possible to persuade prosecutors to drop charges if the defendant’s actions were a reasonable reaction to an emergency.

2.3. The driver complied with the officer’s orders

Police are very busy and sometimes make mistakes. Perhaps the defendant did comply with the police’s orders, and the police simply did not see it or mistook the defendant for another driver who did violate their orders.

In the City of Las Vegas, the fine for disobeying a traffic officer is $305.4 Different cities and counties impose different fines. For example, the fine in the City of Reno is $220.5

Violating NRS 484B.110 is technically a misdemeanor, which carries a sentence of up to $1,000 in fines and/or up to six (6) months in jail. But judges very rarely hand down a jail sentence to traffic defendants.6

Usually yes, unless the defendant has a long history of traffic violations. And if the defendant’s case is strong, it may even be possible to get the charge totally dismissed.

Disobeying an officer’s traffic directions carries four (4) demerit points.7 The Nevada DMV keeps these points on a person’s license for one year, and then it takes the points away.

If a driver ever accrues twelve (12) points on his/her driver’s license, the license will go into suspension for six months. The only way to contest this suspension is through a DMV hearing, which is similar to a trial.8

Driving on a suspended license is a misdemeanor carrying up to six (6) months in jail and/or up to $1,000 in fines. So people with suspended licenses are cautioned not to drive and to hire an attorney to try to fight the suspension.9

Unfortunately, yes. But if the charge gets reduced to a non-moving violation or a dismissal, there should be no rate hikes.

It is usually not required. But some defendants choose to do traffic school in order to pay a lower fine or to get the charge reduced to a non-moving violation. In the ideal situation, the defense attorney can negotiate a charge reduction or dismissal with no traffic school requirements.10

As soon as a Nevada traffic defendant misses a fine payment or a court date, the judge will issue a bench warrant for his/her arrest. And the only way to recall (“quash”) the warrant is to request a court hearing.

It is highly recommended that people with bench warrants rely on attorneys to appear at “motion to quash” hearings. Defense attorneys can usually appear at these hearings without the defendant having to show up (and risk getting taken into custody).11

Four (4) demerit points are added to a defendant’s commercial driver’s license (CDLs) for disobeying a cop’s orders. In addition, the defendant has 30 days to inform his/her employer about the citation.12

Federal law considers it a “railroad-high-way grade crossing offense” to disobey a traffic officer. Commercial drivers who are convicted of this offense face mandatory CDL license suspension. And the period of suspension increases with each successive conviction: 13

In many cases, the defendant’s home-state DMV will impose the same penalties that it would if the citation occurred in that state. But consult with an attorney in that state for more specific information.

Once one (1) full year passes after the case ends, the defendant may pursue getting his/her criminal record sealed.14

Note that there is no waiting period to pursue a record seal if the case gets dismissed (which means there was no guilty verdict or guilty plea).15

No. Deportable offenses do not include minor traffic matters. Still, immigrants slapped with a traffic citation should consult with an attorney to make sure no recent changes in immigration law will threaten their resident status.

Even though fighting the case may draw out the matter for a few weeks, it is still usually worth it. Traffic defendants who fight their tickets often receive favorable plea deals, including charge reductions or possibly dismissals. And a little extra time and effort are worth not getting any driver’s license demerit points or car insurance rate increases.

If necessary, defendants accused of a traffic offense may request a bench trial (where the judge decides the verdict). But it is very rare for traffic ticket cases to make it to trial. Almost always, the defense and prosecutor can agree on a plea deal.16

There are three reasons why it is a good idea to lawyer up:

For people issued a citation within Las Vegas’s unincorporated areas, Las Vegas Justice Court holds biweekly “attorney sessions” on Tuesdays and Thursdays. The sole purpose of these sessions is to negotiate traffic tickets cases. Since these attorney sessions occur so frequently, these defendants can usually get their traffic ticket cases resolved within a few days.

16. If a driver causes an accident, can I file a lawsuit?

Most cases settle out of court. Our Las Vegas car accident attorneys would fight for a large settlement to cover the victims’:

But if necessary, our attorneys are ready to take the case to trial in pursuit of hefty compensatory damages and punitive damages. The victim may even be eligible for damages if he/she partially caused the accident. Learn more about our Las Vegas personal injury attorneys.

Call our Las Vegas criminal defense attorneys for a consultation to discuss how we may be able to get your charges reduced or dismissed with no traffic school, demerit points, or insurance rate increases.