Under NRS 484B.307, Nevada law permits drivers to make a right turn on the red light if:

Making an improper right turn is a misdemeanor in Las Vegas carrying a $305 fine and four (4) Nevada driver’s license demerit points. But in many cases, making an illegal right turn can get lessened to a non-moving violation or even dismissed. Possible defense strategies are:

People who get cited for making an illegal right turn risk getting a Nevada bench warrant if they do not handle the ticket in a timely manner. Therefore, traffic defendants should take care to hire an attorney to manage the case before the fine deadline passes. 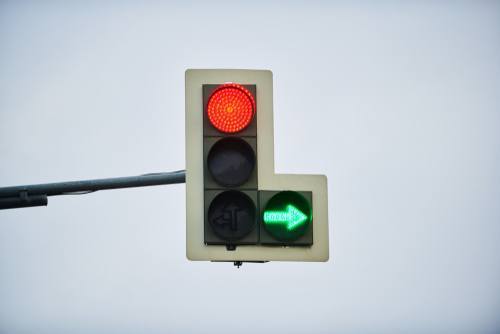 1. When drivers may turn right on red in Las Vegas, Nevada

Drivers may turn right at a red light in Nevada as long as the following six conditions are true:

If a traffic lantern also has a right-turn arrow lens, then drivers may make a right on red only if the green arrow is illuminated.1

Every case is different, but some common defenses to charges of making an improper right turn include:

Note that most prosecutors offer a favorable plea deal without making the defendant engage in extensive litigation first. 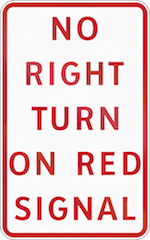 The D.A. may drop charges for making an illegal right turn if there was an emergency.

The defense attorney’s job would be to try to obtain surveillance video of the incident and find eyewitnesses to show that the defendant broke no law by turning right on red. As long as the D.A. cannot prove beyond a reasonable doubt that the defendant violated NRS 484B.307, the case should be dismissed.

2.2. The driver behaved reasonably in an emergency

Drivers have the responsibility to behave reasonably under the circumstances. And in some situations, making an illegal turn may be the best way to avoid an accident.

In Nevada personal injury cases, defendants should not be found liable of otherwise negligent behavior as long as they reacted reasonably in an emergency.2 Although this “sudden emergency doctrine” is a defense only in civil cases, it might still be enough to persuade a prosecutor to drop criminal traffic charges.

Tempers get very heated on the road, especially after an accident. And sometimes motorists accuse each other of traffic violations they did not commit. But since most traffic lights are affixed with surveillance cameras, it is often possible to disprove wrongful accusers with video evidence.

In the City of Las Vegas, the fine for making an illegal right turn on a red light is $305. The fine doubles if it occurred in a pedestrian safety zone.3 The fine is usually less in other Nevada cities and counties.

As discussed below in section 5, this offense also carries four (4) demerit point penalties.4

Defendants who do not have a long history of traffic violations may be able to get their NRS 484B.307 charge lowered to a non-moving violation. Charge reductions like this are always recommended because non-moving violations carry no demerit point penalties and usually do not cause car insurance rates to go up.

If the state’s evidence is too weak to support a conviction, the defendant’s attorney may even be able to persuade the prosecutor to dismiss the charge completely. 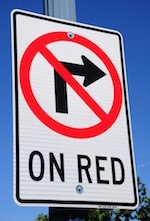 The Nevada DMV adds four (4) demerit points to a defendant’s driver’s license for making an unlawful right-hand turn at a red light.5 These points remain on the person’s license for one (1) year before disappearing.

Drivers need to be careful not to rack up twelve (12) or more demerit points; otherwise, the DMV will suspend their license for six (6) months. And the only way to contest the suspension is by having a DMV administrative hearing, which may be difficult to win.6

People convicted of making an illegal right turn on a red light in Nevada can expect to see a car insurance rate increase because it is a moving violation. That is why traffic defendants should try to fight to get the charge reduced to a non-moving violation, which in most cases do not result in insurance premium hikes.

Traffic school is an online class that judges may order defendants to complete as a condition of their sentence. It is usually not required, but it can be useful if the prosecutor is unwilling to offer a plea bargain:

Defendants who cannot pay the fine can do community service. But if they fail to complete the service, a bench warrant will issue.

In practice, judges understand mistakes happen are usually willing to quash bench warrants. But if the defendant has a history of missing court, the judge may be unwilling to release the defendant from custody until the traffic case is resolved. 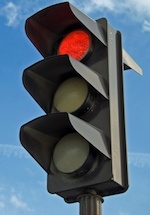 Every state’s DMV is different. Therefore, people with non-Nevada licenses should contact an attorney in their home state to learn if and how a Nevada traffic citation will affect their license. In many cases, the home state DMV will penalize the defendant in the same way it would had the incident happened in the home state.

11. Sealing convictions for illegally turning right on red in Nevada

If a person gets convicted of violating NRS 484B.307, he/she has to wait one (1) year after the case ends before petitioning the court to seal the record.10 But if the charge gets dismissed so there is no conviction, then the defendant may commence the sealing process right away.11

It is always a good idea to get criminal records sealed, even for minor traffic offenses. Competition for employment is very high, and it always looks better to potential bosses to have a clean record. Learn more about sealing criminal records in Nevada.

Making an unlawful turn is not a deportable offense in Nevada. Still, immigration laws are in a constant state of flux. Therefore, any non-citizen facing traffic charges are encouraged to consult with an attorney. Learn more about the criminal defense of immigrants in Nevada.

Remember that undocumented immigrants who get pulled over for a traffic violation are subject to removal even if they do not get convicted of the traffic charge. Illegal aliens are advised to consult with a Nevada immigration attorney to educate themselves about their options for obtaining legal residency in the U.S.

Many people slapped with a traffic ticket want to “throw money at the problem” by just paying the fine online and forgetting about the whole thing. However, the consequences do not end there: Often, the defendant may get demerit points on their license and higher insurance rates.

But if the defendant hires an attorney to fight the ticket, there is a good chance the prosecutor will reduce it to a non-moving violation or possibly a dismissal with no DMV or insurance consequences. Therefore, it is always recommended that traffic defendants lawyer up and fight the charge. 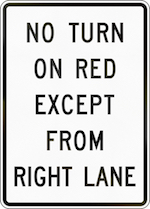 People charged with violating NRS 484B.307 may have a bench trial.

People charged with wrongfully making a right turn on a red light can always fight the case at a Nevada bench trial. They are just like Nevada jury trials but without the jury — the judge decides the verdict.12

It is rare for a traffic case to escalate to a trial, however. Prosecutors are often willing to reduce the charge as part of a plea bargain.

Many traffic defendants proceed “pro se” (without an attorney), but they are putting themselves at a disadvantage because:

People who cause car accidents for violating traffic laws — such as by making an illegal right on a red light — can be sued by the victim(s) under the legal doctrine of negligence per se. The at-fault driver (“defendant”) can be found liable to the victim (“plaintiff”) in a negligence per se case if:

It may not matter if the plaintiff was partially to blame for causing the accident. Under Nevada’s comparative negligence laws, plaintiffs can still prevail in negligence lawsuits as long as the defendant was at least 50% at fault.14

Our Las Vegas car accident attorneys negotiate and litigate for the highest financial rewards available to pay for the victims’:

In most cases, it is possible to achieve a favorable resolution without a trial. Learn more about our Las Vegas personal injury attorneys.

The Nevada crime of making an illegal u-turn carries a $230 fine in Las Vegas as well as three (3) driver’s license demerit points. In the majority of cases, Nevada judges may reduce the charge to a non-moving violation carrying no demerit points.

The Nevada crime of failing to yield before making a left against traffic carries a $305 fine in Las Vegas and four (4) driver’s license demerit points. Commercial drivers will also have four (4) demerit points added to their CDL.

Were you cited for making an illegal right turn at a red light in Clark County or elsewhere in Nevada? Then our Las Vegas criminal defense attorneys are here to help. Phone us for a FREE phone consult, and we will talk about how we will fight to get your ticket dropped or lessened to a non-moving violation.