Failing to yield to a traffic incident carries a fine of $395 as well as four (4) driver’s license demerit points in Nevada. It does not matter whether the vehicle is an ambulance, police car, or fire truck.

As with most traffic tickets, Nevada courts are usually willing to reduce a charge for violating NRS 484B.607 to a non-moving violation or even a full dismissal. The most important thing is not to ignore traffic tickets–judges will not hesitate to issue a bench warrant to people who persist in missing court or skipping out on a fine payment.

In this article, our Las Vegas traffic ticket attorneys answer frequently-asked questions about failing to yield to an emergency vehicle in Clark County and throughout Nevada. We explain defenses, punishments, demerit points, record seals, and more. Click on a topic below to jump directly to that section:

If you have been injured by someone who did not yield, you may be owed a significant financial reward. Contact our Las Vegas personal injury attorneys to learn more. Also see our related article on failure to yield to a cyclist. 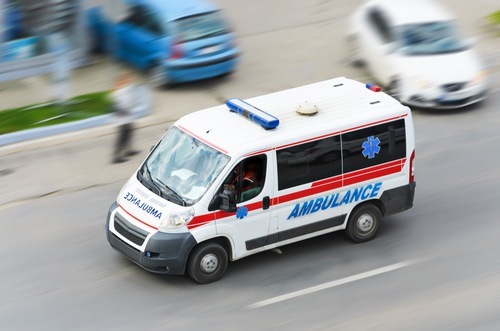 Failing to yield to an ambulance carries a $395 fine in Las Vegas.

1. Is “failing to yield to a traffic incident” illegal in Nevada?

Yes. Drivers are required to decrease speed and possibly stop when approaching a traffic accident. Specifically, the driver is expected to do the following four things:

In short, Nevada drivers should slow down and take care when passing emergency vehicles.1

Also see our related article for failing to yield to tow trucks.

2. How do I fight charges for “not yielding to a traffic incident”?

Effective evidence to fight charges of violating NRS 484B.607 includes:

Unless the incident resulted in an accident, it is unlikely this type of traffic offense will result in significant litigation. Most prosecutors are willing to reduce or drop the charges without the defendant having to fight the charge on the merits.

3. What are the penalties for “failing to yield to a traffic incident” in Las Vegas, Nevada?

Note that Nevada does designate traffic violations as “infractions” as California does. Nevada traffic violations are misdemeanors, which carry up to $1,000 in fines and/or up to six (6) months in jail. But judges do not usually impose jail in traffic cases.2

If a person’s Nevada driver’s license has been suspended, he/she can fight the suspension in a DMV hearing. It is similar to a trial, and it is recommended that the person hire an attorney to appear for him/her.

As long as a person’s driver’s license is suspended, he/she should not drive. Otherwise, he/she faces charges for driving with a suspended license, a misdemeanor that carries up to six (6) months in jail and/or up to $1,000 in fines.4

Yes, all moving violations do. That is another reason the driver should retain a lawyer to try to fix the ticket so it becomes a non-moving violation, which should not affect insurance.

Not necessarily. Nevada judges will usually close out a traffic case once the defendant pays a fine. However, completing Level 1 Nevada Traffic school may get the charge reduced to a non-moving violation. This way, the defendant gets no demerit points.5

Getting a bench warrant recalled requires filing a motion with the court and having a hearing, so it is advised that defendants hire an attorney to handle this process. Then the judge would need to issue an “FTA clearance” so the DMV can “un-suspend” the defendant’s license.6

Four (4) demerit points will be added to the defendant’s commercial driver’s license (CDL) as well as to his/her regular driver’s license. CDL-holders also have to tell their employer about the traffic violation within thirty (30) days.7

Every state’s DMV is different, so it is advised to seek legal counsel from a home-state attorney. All the DMV offices communicate with each other, so it is likely the home state DMV will impose the same demerit penalty that it would if the incident occurred in the home state.

11. When can I seal a conviction for “failing to yield to a traffic incident”?

No, this traffic offense is not a deportable crime. But immigrants are encouraged to hire an attorney even when they are charged with minor crimes since immigration law is in a constant state of flux.

By all means, fight it. Most prosecutors are willing to reduce charges or possibly dismiss them. Escaping a conviction and demerit points is worth the extra time it takes to fight a traffic ticket.

People cited for a traffic violation in Nevada rarely resort to trial because they can usually negotiate a favorable plea deal. But if they want, they have the right to a bench trial (where the judge determines the verdict) but not a jury trial.10

Everyone has the right to represent him/herself, but it is rarely a good idea. An experienced traffic defense attorney knows how to negotiate the best deals. And barring extenuating circumstances, traffic ticket defendants never need to show up to court if they have an attorney.

Las Vegas Justice Court has jurisdiction over thousands of traffic tickets issued every month in the incorporated section of Las Vegas. The court holds biweekly “attorney sessions” on Tuesdays and Thursdays where the prosecution and defense can resolve traffic tickets quickly. So whereas lots of criminal cases may take weeks or months to play out, most traffic tickets in Las Vegas can be resolved within the week.

Were you cited for not yielding to a traffic accident in Clark County, Washoe County, or elsewhere in Nevada? You are entitled to a consultation with our Las Vegas criminal defense attorneys today. Our attorneys have decades of combined experience in getting traffic tickets lessened to non-moving violations with minimum fines, zero demerit points, and no traffic school. (For cases in California, please visit our page on Vehicle Code 21806 VC.)

Were you or a loved one harmed because someone neglected to yield in Nevada? You could be entitled to a large financial settlement, even if you partly contributed to the accident. Our Las Vegas car accident attorneys will fight zealously to get more than enough compensation to cover your medical bills, pain and suffering, lost wages, and loss of future earnings. In most cases, we will not even have to go to trial to get you money.