Like speeding, driving too slowly in Las Vegas can get motorists a traffic ticket as well as two (2) driver’s license demerit points in Nevada. Fine payments for violating this “Move Over Law” increase with each successive citation for knowingly driving too slowly in the left lane of a Nevada highway:

Even though driving at too slow a pace is a minor offense, Nevada courts may issue bench warrants to people who blow off their ticket. So it is very important that anyone with a traffic citation take the case seriously and, better yet, retain experienced legal counsel to handle the matter.  The charges can often be reduced to a non-moving violation or possibly a dismissal.

In this article, our Las Vegas traffic ticket attorneys answer frequently-asked-questions about driving too slowly in Clark County and throughout Nevada. We tackle such issues as defenses, punishments, demerit points, record seals, and more. Click on a topic below to jump directly to that section:

If you have been injured by someone not driving fast enough, you may be able to sue. Contact our Las Vegas personal injury attorneys to learn more. 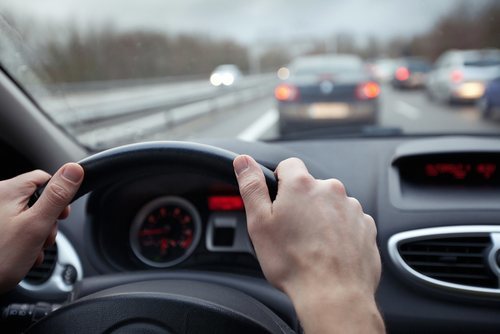 1. Is “driving too slowly” illegal in Las Vegas, Nevada?

Yes. Nevada law prohibits driving so slowly “as to impede the normal and reasonable movement of traffic except when reduced speed is necessary for safe operation or in compliance with the law.” Slow drivers that are impeding traffic are obligated to:

Note that if five (5) or more vehicles form a line behind a slow-moving vehicle on road with just one lane for each direction, that vehicle must turn off the roadway at the nearest turnout or safe place to pull over. Failing to do so is a civil infraction.

And obviously, it is illegal to completely stop a car on the road so as to impede the normal movement of traffic unless the stop is lawful or necessary for safe operation. This section is comparable to Vehicle Code 2400 VC, California’s minimum speed law which makes it illegal to drive too slowly.

1.1. Not driving fast enough in the left lane of a highway

The Nevada Legislature recently passed a law prohibiting driving on the left lane of a highway if the driver knows, or reasonably should know, that he/she is traveling below the speed limit and is being overtaken in that lane from the rear by a motor vehicle traveling at a higher rate of speed. The are five common-sense exceptions:

As explained in question 3 below, the sentence for violating this law gets harsher with each successive conviction.1

2. How do I fight charges for “driving at too slow a pace” in Las Vegas, Nevada?

Firstly, most traffic ticket defendants can achieve a charge reduction or possibly a dismissal without having to litigate the case on the merits. But in the rare instance a traffic case progresses into litigation, the defendant may be able to show that he/she did not go too slowly…or that the slow speed was legally justifiable…through surveillance video, photographs or eye-witnesses.

If the defendant is facing the specific charge of driving at too slow a pace on a highway’s left lane, there is another possible defense: that the driver did not know that he/she was driving below the speed limit: Perhaps the car’s odometer was defective, or there was insufficient signage to indicate what the speed limit was. If the D.A. cannot prove beyond a reasonable doubt that the defendant knew, or should have known, that he/she was not driving fast enough, the case should be dropped.

3. What are the penalties for “driving too slowly” in Las Vegas, Nevada?

Driving at too slow a pace is a misdemeanor in Nevada. The maximum penalty is $1,000 in fines and/or six (6) months in jail, but judges almost never impose jail unless the defendant has an extensive criminal history. The court typically orders a fine of a few hundred dollars.

4. Can I get a charge for “driving too slowly” reduced to a non-moving violation in Las Vegas, Nevada?

Chances are very good that a citation for driving at too slow a pace can get reduced to a non-moving violation, especially if the person has little-to-no criminal history.

5. How many points will “driving at too slow a pace” put on my driver’s license in Nevada?

Two (2) demerit points, but the Nevada DMV removes these points after one (1) year. If the person gets twelve (12) points, his/her license will get suspended for six (6) months.3

While the license is suspended, the license-holder must not drive or else face charges for driving with a suspended license. This misdemeanor offense carries up to six (6) months in jail and/or up to $1,000 in fines.4

Probably, though it should have less consequence than a speeding ticket. If the driver can get the charge pleaded down to a non-moving violation, though, there may not be any rate hikes at all.

When the fine becomes due and/or the defendant does not appear at the required court date, the judge will grant a 30-day grace period before issuing a bench warrant. And defendants who fail to pay must be given the opportunity to do community service before a bench warrant will issue.

The only way to get a bench warrant recalled is to file a “motion to quash” and have a hearing. It is highly recommended to hire an attorney for this process because the attorney can usually appear in place of the defendant at court.

Note that the Nevada DMV may also suspend a person’s driver’s license for failing to show up at court, and the judge would need to issue an “FTA clearance” for the DMV to reinstate it.6

As with a regular Nevada driver’s license, a commercial driver’s license (CDL) will get two (2) demerit points for driving too slowly. The driver also has to tell his/her employer about it within thirty (30) days.7

The Nevada DMV will inform the out-of-state DMV about the ticket, so that DMV will probably impose whatever punishment is standard for that state. Consult with an attorney from the home state for more information.

11. When can I seal a conviction for “driving too slowly” in Nevada?

Driving at too slow a pace in and of itself is not a deportable crime. But if the person is undocumented and brought to the attention of ICE, he/she may be at risk of getting deported. Learn more about the criminal defense of immigrants in Nevada.

Always fight because there is a good chance the charge can get reduced with lesser fines and no demerit points. And because the penalties get steeper for each successive conviction for driving too slowly on a highway’s left lane, getting the charge reduced or dismissed will relieve the defendant from harsher punishments if he/she gets cited a second time.

Traffic ticket defendants who want to take the matter to trial can have a bench trial (where the judge determines the verdict) but do not have the right to a jury trial.10 Traffic trials are exceedingly rare, however, since most cases resolve well for the defendant.

No, but having an experienced criminal defense attorney is a huge benefit. It relieves the defendant from having to show up to court (which is important for people with day jobs or out-of-town defendants), and they can often get very favorable resolutions based purely on their reputation.

People cited for traffic violations in the unincorporated city of Las Vegas can usually get their traffic tickets resolved within a few days if they hire an attorney. Las Vegas Justice Court holds biweekly “attorney sessions” on Tuesdays and Thursdays dedicated just to prosecutors and defense attorneys negotiating traffic ticket cases.

Were you cited for driving at too slow a pace in Clark County or elsewhere in Nevada? Then contact our Las Vegas criminal defense attorneys right now for a free consultation. Our legal team has had great success in fixing our clients’ traffic tickets so they pay minimum fines, get zero demerit points, and do no traffic school.

Have you been injured because someone else was not driving fast enough in Nevada? Our Las Vegas car accident attorneys may be able to win a large financial settlement to cover your losses, including doctor bills, pain and suffering, lost wages and future earnings. Most of the time, we can recover monetary damages without having to resort to trial.