Drivers suspected of hitting a pedestrian by “failing to exercise due care” in Nevada face reckless driving charges. Depending on the case, penalties range from fines and community service to incarceration.

Reckless driving causes eight (8) demerit points to go on the person’s driver’s license. And penalties for “failing to exercise due care” may double if the incident happened in a pedestrian safety zone.

It is usually possible to get Nevada traffic charges reduced or dismissed. People who ignore their traffic charges will have a bench warrant issued for their arrest, so it is important they consult with an attorney as soon as possible about how to handle their cases.

Note that failing to exercise due care for pedestrians without causing a collision can be cited as a civil infraction, carrying only a civil penalty.

In this article our Las Vegas traffic ticket attorneys answer frequently-asked-questions about the laws for exercising due care towards a pedestrian in Clark County and throughout Nevada, including ways to fight the charges, possible sentences, demerit points, and record seals. Click on a topic below to jump to that section:

If you were a pedestrian injured by a driver, you may be entitled to money damages. Contact our Las Vegas personal injury attorneys to learn more. 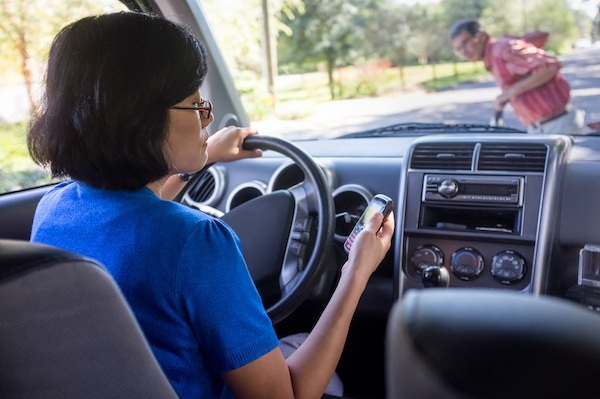 Causing a collision by not exercising due care is charged as reckless driving in Nevada.

1. What is “failing to exercise due care towards a pedestrian” in Nevada?

Drivers who cause an accident with a pedestrian in Nevada because of their lack of “due care” face charges of reckless driving. Nevada is actually one of the most dangerous states for pedestrians.1

Drivers suspected of causing an accident with a pedestrian by failing to exercise due care are not charged with violating NRS 484B.280 (failing to exercise due care). Instead, they are charged with violating NRS 484B.653 (reckless driving). And if the incident occurred in a pedestrian safety zone, the driver faces additional penalties under NRS 484B.135. And if a cop sees a driver not exercising due car without causing an accident, the cop may slap him/her with a “careless driving” ticket.2

The most efficacious strategies for contesting criminal charges for “failing to exercise due care towards a pedestrian” turn on the facts of the case. Either way, the driver’s defense attorney would try to find evidence to undermine the state’s case, such as:

Chances are the arresting officer from Las Vegas Metro or the Nevada Highway Patrol were not present at the time of the incident and would not be able to provide firsthand accounts.

Note that many traffic cases do not progress to trial. The D.A. may be amenable to lessening the charge or possibly dismissing the charge following a negotiation with the driver’s defense attorney.

3. What are the penalties for hitting a pedestrian by “failing to exercise due care” in Las Vegas, Nevada?

If the pedestrian who was hit did not sustain substantial bodily harm, failing to exercise due care is a misdemeanor. The punishment increases with each successive offense:

Additionally, the court may order up to six (6) months in jail. Note that if the incident occurred in a pedestrian safety zone, the penalties may be doubled. But note that this additional penalty must not exceed a total of $1,000 in fines, six (6) months of jail or 120 hours of community service.3

If the pedestrian did sustain substantial bodily harm or was killed, failing to exercise due care is a category B felony. The punishment is one to six (1 – 6) years in Nevada State Prison as well as $2,000 to $5,000 in fines.

Note that failing to exercise due care without causing a collision is a civil infraction carrying only a civil penalty.4

4. Can I get my charge reduced to a non-moving violation?

Possibly, though the D.A. takes traffic cases more seriously when a pedestrian is involved. Note that getting a traffic charge reduced to a non-moving violation is always more difficult for defendants with a lengthy history of traffic violations.

5. How many points will it put on my license?

The Nevada DMV adds eight (8) demerit points to the licenses of drivers suspected of reckless driving. Demerit points remain on a driver’s license for one (1) year. (Note that drivers cited for “careless driving” will get six (6) points added to their license.) If a driver’s license ever accrues twelve (12) or more points, the driver will have his/her license suspended for six (6) months.5

Note that driving on a suspended license is a misdemeanor that carries up to six (6) months in jail and/or up to $1,000 in fines.6

Also note that it is possible to contest license suspensions at a DMV Hearing, which is like a small-scale trial. However, drivers with suspended licenses are strongly advised to retain an attorney to handle this procedure.

Probably. Insurance companies usually increase insurance rates whenever the insured gets a moving violation. That is another reason why traffic defendants are encouraged to hire attorneys to try to get the charges dismissed or reduced to a non-moving violation.

It depends on the case. Sometimes, doing traffic school can help get a traffic charge lessened to a non-moving violation.7

8. What will happen if I ignore my case?

Any defendant in a criminal case who misses a mandatory court date or is late on a fine payment will get a bench warrant after a 30-day grace period. Note that people late on their fine payments must be given the opportunity to do community service instead of paying the fine before a bench warrant can issue.

Once a person has a bench warrant, he/she may be arrested at any time and held in jail with no bail until he/she agrees to face the charges, show up to court, and make payments.

Note that if you are cited for only a civil infraction, being late on your civil penalty payment will not cause a bench warrant to issue. Though you may be assessed a late fee.

Note that drivers with CDLs are required to notify their boss about getting a reckless driving charge within thirty (30) days of the incident.9

Every state has its own rules. Therefore, out-of-state drivers charged in Nevada are encouraged to talk with an attorney in their home state about the ramifications for their license.

But if the charge gets dismissed (so there is no conviction at all), there is no waiting period to pursue a record seal.12

Probably not, since reckless driving is not a deportable crime. Still, any non-citizen facing criminal charges in Nevada should retain an attorney to discuss their case.

13. Should I fight my charge or just plead guilty?

All traffic defendants are encouraged to fight the charges with the help of an experienced attorney. The D.A. may be willing to reduce or dismiss the charges, which may result in no demerit points, no traffic school, no insurance rate increases, and lower or zero fines.

Note that most traffic cases do not go to trial. In the majority of cases, the defense attorney and prosecutor can agree to a settlement.13

It is highly recommended. Prosecutors often offer better deals to represented defendants. Lawyers are skilled in eliciting the best plea bargains from prosecutors. And in most cases, defendants with attorneys never have to appear in court, which is very important for defendants who have day jobs or live far away from the courthouse.

Were you arrested for reckless driving for failing to exercise due care towards a pedestrian in Nevada? For a consultation, phone our Las Vegas criminal defense attorneys today. We will fight to get your charges dismissed or lessened to a non-moving violation with the lowest fines, no demerit points, and no traffic school.

Were you or a loved one a pedestrian injured by a driver? You could be entitled to large money damages, even if you might have been to blame in part. Our Las Vegas car accident attorneys want to try to win you compensatory damages to cover your medical bills, pain and suffering, lost wages, and loss of future earnings, and more. And you pay us zero unless we win your case.