The open carry of firearms in Nevada is legal without the need of a license or registration. Though people are required to obtain a CCW permit in order to carry a concealed weapon. There are certain locations where guns are prohibited, including:

People face stiff Nevada State Prison sentences for violating certain firearm laws, including using a gun in the commission of a crime (NRS 193.165) or being a felon in possession of a firearm (NRS 202.360). But it is possible just to pay a fine for other gun crimes, such as brandishing a gun (NRS 202.320) or possessing a gun under the influence (NRS 202.257).

Nevada background checks are required for all gun sales (unless the purchaser has a CCW permit). People who lose their Nevada gun rights might be able to get them back through a Nevada pardon. With some exceptions, children under 18 may not possess guns. And immigrants convicted of a firearm crime risk deportation.

In this article, our Las Vegas criminal defense attorneys provide an overview of Nevada firearm laws with links to our in-depth articles on each subject. Click on a topic to jump to that section. 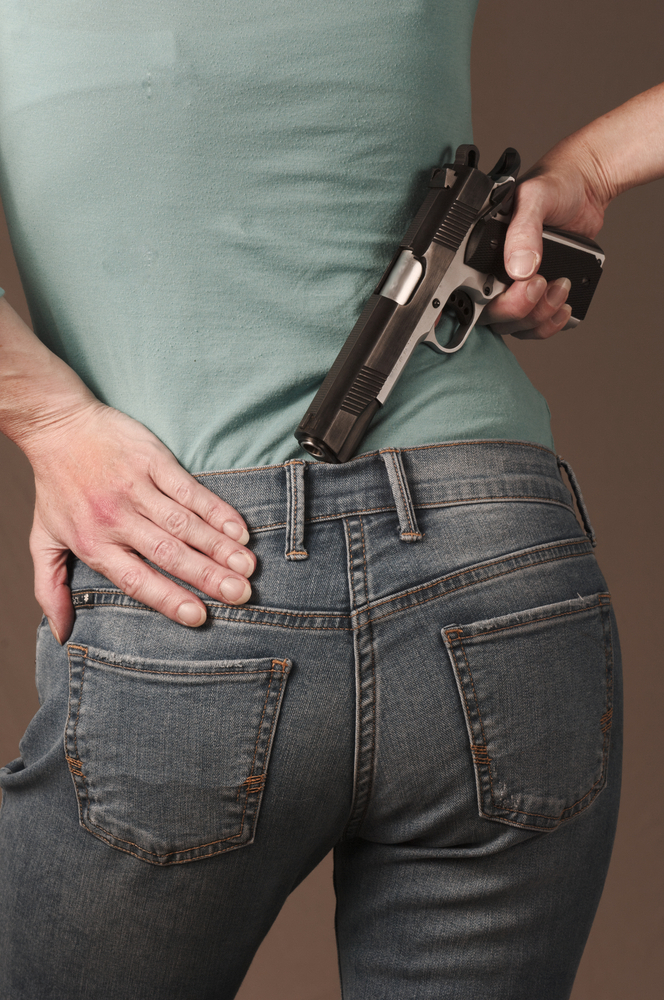 1. Where are guns illegal?

Pistols, handguns, and rifles are not permitted at the following Nevada locations:

Possessing a gun in a prohibited location is a Nevada misdemeanor, carrying:

Note that gun registration in Nevada is not required to have a gun. Read our article 3 steps to buying a gun.1

Carrying a concealed weapon with no permit is Nevada felony.

Concealed carry is legal throughout Nevada as long as the person has a valid carrying concealed weapons (CCW) permit.

Concealed carry without a valid permit is a category C felony in Nevada, carrying:

Learn more in articles about concealed carry laws (NRS 202.350), how to obtain a Nevada CCW permit, and carrying concealed in casinos.3

People with felony convictions or domestic violence (NRS 200.485) convictions may not have a gun in Nevada. Gun possession is also prohibited for:

Being an ex-felon, fugitive, or drug addict in possession of a firearm is a category B felony in Nevada. The punishment is:

The maximum prison sentence goes down to four (4) years if the defendant is an illegal alien or mentally ill. Learn more in our article about being an ex-felon in possession of a firearm (NRS 202.360).4

Learn more in our article about Nevada laws for guns and restraining orders.5

5. What are the penalties for gun crimes?

Shooting a gun from inside a vehicle or structure in a wanton or malicious way in a populated area is category B felony, carrying:

Otherwise, shooting a gun in an unpopulated area is a misdemeanor carrying:

The same penalties apply for firing a gun into an abandoned vehicle or structure. But if the vehicle or building is occupied, shooting is a category B felony carrying: 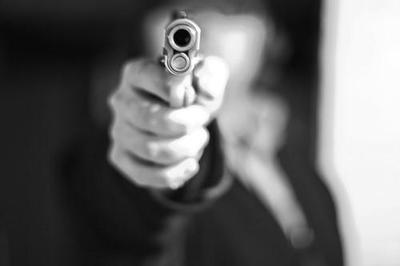 Aiming a gun at a person is a gross misdemeanor in Nevada.

Assaulting a person with a gun is a category B felony, carrying:

Merely aiming a gun at a person is a gross misdemeanor, carrying:

And simply brandishing a gun in a threatening manner is a misdemeanor, carrying:

It is a category C felony to sell or give a gun to either a:

Knowingly possessing, making, or disposing of a short-barreled rifle or shotgun is a category D felony, carrying:

And making or selling metal penetrating bullets for shotguns is a gross misdemeanor, carrying:

Learn more in our article about Nevada ammunition laws (NRS 202.273).8 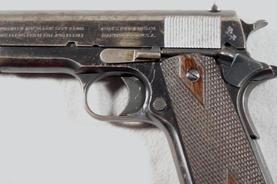 Gun theft is a felony in Nevada carrying prison, fines, and restitution.

Meanwhile, knowingly possessing a gun with a changed serial number is a category D felony, carrying:

Stealing a gun is a category B felony, carrying

6. Will having a gun increase my sentence?

When a person uses a gun to carry out a crime in Nevada, the courts may double that crime's sentence to up to twenty (20) extra years in prison. For example, the maximum sentence for robbery (NRS 200.380) is 15 years in prison. If the defendant had a gun, the judge could double it to 30 years.

Note that enhanced sentences for gun use do not apply to cases where the gun was a necessary element of the crime itself, such as aiming a gun at someone or brandishing a gun (see the previous section for more examples).10

Without gun possession, the prison sentence for burglary or home invasion is one to ten (1-10) years.11

7. How can gun rights get restored?

The only way to restore gun rights in Nevada is to get a pardon (which is different from record sealing in Nevada).

There is a mandatory waiting period to petition for pardons. The length depends on the class of crime the person was convicted of:

Learn more in our article on restoring gun rights in Nevada.12

8. Is it a crime to carry a gun while drinking?

Carrying a gun while drinking or in a bar is not itself illegal. But it is a misdemeanor in Nevada to possess a gun with a blood alcohol level (BAL) of .08% or higher. The sentence is: 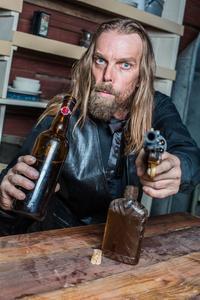 Gun possession with a .08% BAC is a Nevada misdemeanor.

Learn more in our article about gun possession under the influence (NRS 202.257).13

9. When can hunters have guns?

People are required to have licenses in order to hunt with guns in Nevada. Hunting without a license is a misdemeanor, carrying:

Learn more in our article about Nevada laws for hunting with a firearm.14

With some exceptions, children under eighteen (18) may not have guns in Nevada. Children adjudicated delinquent for violating gun laws may be ordered (for a first offense):

And children who break Nevada's hunting laws will lose their hunting license for at least two (2) years. Learn more in our article about Nevada juvenile gun laws.15

Giving a gun to children

Adults who unlawfully aid a child in possessing a gun face criminal charges as well. Helping a child get a hold of a gun if there is a substantial risk the child will be violent is a category C felony, carrying: 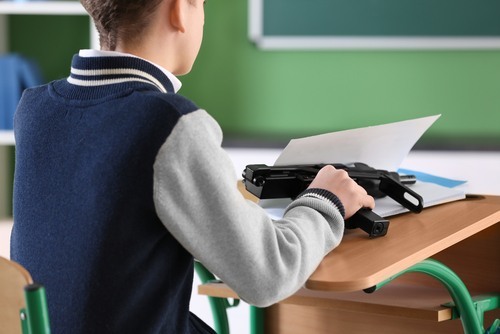 Giving a gun to a child can be a Nevada felony.

If there is no substantial risk the child will be violent, unlawfully giving a child a gun is a misdemeanor (for a first-time offense). The sentence is:

Learn more in our article about aiding children to come into possession of a gun (NRS 202.300).16

Nevada law does not mention assault weapons. But federal law forbids machine gun possession unless it was lawfully possessed and registered prior to May 19, 1986. Illegal possession of a machine gun is a felony carrying:

Note that bump stocks are now illegal to own as of March 26, 2019. This federal ban is a reaction to the Las Vegas Mandalay Bay shooting on October 1, 2017.17

Learn more in our article about Nevada assault weapon laws.

Gun buyers need to submit to a Nevada background check in both commercial and private gun sales and transfers (except if the buyer has a current and valid CCW permit).

In 2016, Nevada voters approved a new law that would have required private gun merchants to run criminal background checks on prospective buyers, though the law never went into effect.18 On February 15, 2019, the Nevada governor signed Senate Bill 143 (2019) into law, now requiring background checks in private gun sales as well.19

13. What are immigrants' firearm rights?

An immigrant's legal status determines whether they may possess firearms.

Note that violating gun laws is a deportable offense. Therefore, non-citizens charged with firearm crimes should retain an experienced criminal defense attorney to try to get the charge dropped or reduced to a non-removable offense. Learn more about defending non-citizens on Nevada criminal charges.20

Family or household members can now ask the court to temporary keep firearms away from a person who appears to be a threat to him/herself or others.

The purpose of this law is both to prevent shootings but to also get help to the would-be shooter.21

Also see our article about the federal crime of using guns to carry out drug trafficking or violent crimes (18 U.S.C. § 924(c)).