Under NRS 202.350, it is a Category C felony offense to carry a concealed weapon without a valid CCW permit. A conviction is punishable by a sentence of up to 5 years in state prison.

That being said, obtaining a CCW is relatively easy. Nevada is a “shall issue” state, which means that anyone who is eligible for a CCW permit must be granted one.

People without a CCW permit may open carry guns in Nevada. People convicted of felonies or battery domestic violence may be able to get a CCW permit if they have their gun rights restored through a governor’s pardon.

Carrying a concealed firearm without a current and valid CCW permit is a category C felony. The maximum penalty includes:

Simply forgetting to carry one’s CCW permit carries only a civil fine of $25.

Typical defenses to carrying a hidden weapon without a permit include:

Depending on the case, a defense attorney may be able to plea bargain an NRS 202.350 charge down to a lesser offense.

Carrying a concealed handgun in Nevada is a crime unless the person has a valid CCW permit.

1. Do I need a permit to carry concealed weapons in Nevada?

Yes. Nevada gun laws require people to have a valid CCW permit (and ID) in order to carry the following types of firearms concealed:

Therefore, CCW permits are required to carry concealed pistols or revolvers because they are a type of handgun.1

Note that people with CCW permits do not need to submit to background checks to purchase firearms in Nevada.

People who are uncertain about whether they need a CCW permit in Nevada are strongly advised to contact an attorney before attempting to carry a concealed weapon. Sheriff offices review applications for non-firearms CCW permits on a case-by-case basis.

2. What is a concealed weapon?

Weapons are considered “concealed” when they are not readily observable. For example, a weapon becomes concealed when people carry it:

Even when a person openly carries a gun in a belt holster, Nevada law considers the gun concealed if the person’s blazer or jacket shields the gun from plain view.3

3. Where can I carry concealed firearms in Nevada?

People with valid CCW permits may carry concealed firearms on the premises of any public building except for the following locations: 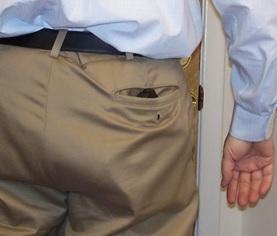 Carrying a concealed weapon is not permitted in certain locations.

Carrying a concealed firearm in a prohibited public building is a misdemeanor. It makes no difference whether the person has a CCW permit. The punishment includes:

Also see our article about carrying concealed in casinos.

There are other locations in Nevada where carrying a firearm (concealed or not) is prohibited. Some examples of gun-free zones include:

The penalties vary depending on the location and whether the controlling law is federal or state. Learn more about open carry laws.

4. What are the penalties for carrying a concealed weapon without a permit?

The penalties for carrying a concealed weapon without a valid CCW permit depends on the weapon:

Carrying a concealed firearm or explosive substance without having a valid CCW permit is a category C felony in Nevada. The punishment includes:

However, it may be possible to get the charge reduced to a lesser offense or a full dismissal.

A CCW permit is required for carrying a concealed machete in Nevada.

5. What if I left my CCW permit at home?

People who simply forget to carry their CCW permit and ID while carrying a concealed weapon in Nevada should not face criminal charges as long as the permit is current and valid. Instead, they may have to pay a $25 civil fine.9

6. How do I fight charges of not having a CCW permit?

Common defenses to NRS 202.350 violations include:

6.1. The weapon was not concealed

CCW permits are required only when a weapon is concealed. Perhaps the police incorrectly believed the weapon was concealed when in fact the defendant was openly carrying it. Typical evidence that may demonstrate that a defendant’s weapon was visible includes:

As long as the D.A. cannot prove beyond a reasonable doubt that the gun or weapon was obscured from plain view, criminal charges should not stand.

6.2. The defendant left the permit at home

Nevada law criminalizes carrying a concealed weapon without having a current and valid CCW permit. It is not a crime simply to forget to bring the permit while carrying a concealed weapon. Once the defense attorney can produce proof that the defendant had a current and valid permit and merely lost it or neglected to carry it on his/her person, the D.A. should drop the charges.

6.3. The government made a clerical error

Like all government bureaucracies, sheriff’s offices are not above making mistakes with data entry, filing, and record-keeping. If the defense attorney can show that the sheriff’s office was mistaken about the defendant not having a current and valid CCW permit, the D.A. should drop the NRS 202.350 charges.

7. What if I have an out-of-state CCW permit? 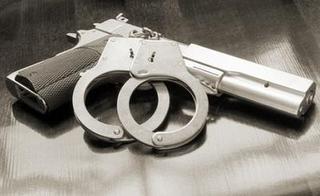 People face up to 5 years behind bars in Nevada for carrying a concealed gun without a valid permit.

(Scroll up to question 4 for the penalties for carrying a concealed weapon without a valid CCW permit.)

8. Can I get my CCW conviction sealed in Nevada?

Usually yes, though the waiting time depends on the specifics of the case:

9. Will my CCW conviction get me deported?

Possibly. Any firearm-related conviction carries the risk of deportation for non-U.S. citizens.13

Any alien who is charged with a crime in Nevada should seek legal counsel as soon as possible. The prosecutor may be willing to change the charge to a non-deportable offense or dismiss it completely.

As a shall-issue jurisdiction, Nevada is mandated to grant CCW permits as long as the applicant meets all necessary criteria. The prerequisites for getting a CCW permit in Nevada are:

CCW applicants have to get fingerprinted and photographed. Law enforcement takes up to six (6) months to process the CCW application. CCW permits are valid for five (5) years.

In Las Vegas, the fee for processing the CCW application is $96.25.

For more information, see our article on how to get a CCW permit in Nevada.

Nevada law prohibits convicted felons from having guns. Being an ex-felon in possession of a firearm is a category B felony, carrying:

If a Nevada court determines that a gun was used during the commission of a crime, the judge will enhance the sentence by one to twenty (1 – 20) years. But this enhanced sentence may not exceed the sentence for the underlying crime…

So if a defendant receives 10 years in prison for armed robbery, the enhanced sentence can be no more than 10 additional years for a total sentence of 20 years.

Learn more about increased penalties for using a firearm in the commission of a crime.

Drawing a gun in a rude, threatening or angry manner is illegal in Nevada. Brandishing a firearm is a misdemeanor, carrying:

If you have been arrested for carrying a concealed weapon in Nevada, please phone our Las Vegas criminal defense attorneys for a consultation.

Arrested in Colorado? Go to our informational article on Colorado concealed weapons laws.

What remedies do people have in Las Vegas when neighbors play music too loud?

Las Vegas residents whose neighbors play their music too loud can take various non-legal, criminal, or civil courses of action, discussed below. In any event, residents should compile evidence of the noisy music, such as: video and audio recordings of the music playing; contact information of other neighbors willing to testify as witnesses to the ...

What Will Get Me Charged with Distracted Driving in Henderson, Nevada?

People develop hernias when a muscle tear or weakness allows organs or tissues to protrude through it. If the patient elects to undergo hernia repair surgery, some surgeons implant a “hernia mesh” to reinforce the affected area. Hernia mesh is a screen-like device composed of animal tissue or synthetic products such as polypropylene. However, many ...

3 times employers in Nevada must pay you overtime