Nevada law treats “driving under the influence of prescription medication” the same as drunk driving. The only difference is that suspects are required to submit to a DUI blood test instead of a DUI breath test.

The punishment for “DUI of prescription drugs” include fines, classes, and driver’s license revocation. But depending on the case, it may be possible to get the DUI charge reduced to reckless driving or completely dismissed.

A first-time DUI of prescription meds is a misdemeanor, carrying:

The sentence grows harsher with each successive DUI conviction within a 7-year period. And a DUI causing serious injury or death is a category B felony, carrying $2,000 to $5,000 in fines and 2 to 20 years in Nevada State Prison.

Three of the several possible arguments to fight charges of “DUI of prescription drugs” include:

Note it is not a defense that:

On this page, our Las Vegas DUI attorneys discuss:

Anyone in Clark County suffering from prescription drug abuse is encouraged to reach out to Southern Nevada Area Narcotics Anonymous. 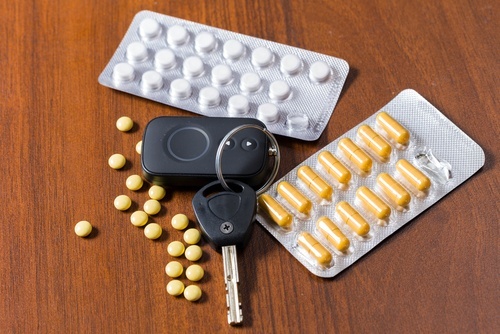 1. What is DUI of prescription drugs in Nevada?

Example: Greg is an insomniac who has a prescription for Ambien to help him sleep. One evening he takes a pill just before getting a call from his boss instructing him to rush to the Henderson office for an emergency meeting. He makes himself some strong coffee in an effort to fight off his sleep deprivation and hops into the car.

But on the way to the office the Ambien kicks in, and he begins nodding off and swerving erratically. If a police catche him, Greg could be arrested and booked at the Henderson Detention Center for driving under the influence of a prescription drug.

In the above scenario, it is irrelevant that Greg is not a drug addict. Nor does it matter that he tried to counteract the sedative with caffeine. Just his action of taking the wheel while being affected by sleeping pills qualifies as DUI in Nevada.

There are three main categories of prescription drugs that may cause a driver to be impaired. These include:

Sometimes doctors and pharmacists fail to inform their patients that a certain drug could impair their driving. So anyone on a prescription medication is advised to consult with his/her provider and inquire as to whether it is safe to drive after taking the drug.

Note that some over-the-counter (OTC) medications may also be hazardous to take before driving, such as Unisom. Driving under the influence of an OTC drug still subjects the driver to DUI prosecution. So always read the drug’s label and warnings before taking the wheel.

1.2. DUI of amphetamines and marijuana in Nevada

It is also “DUI of prescription drugs” in Nevada to drive with unlawful amounts of prescription marijuana (only for 3rd-or-successive DUI cases) or amphetamines (such as Adderall) in one’s blood (for any DUI cases).

Therefore, drivers with too much amphetamine in their blood may be convicted of DUI even if they are driving safely.2 It does not matter if the driver has valid and current prescriptions for amphetamines.

Driving impaired by marijuana is illegal no matter how much marijuana is in the driver’s blood. If the driver has two or more past DUIs, then they can be arrested for DUI just for having illegal amounts of marijuana in their blood – even if they are not impaired.

1.3. Blood tests for “DUI of prescription drugs” cases in Nevada

When a Nevada police officer pulls over a driver on suspicion of driving under the influence, the officer will ask the driver to take a preliminary breath test (PBT) and to perform the following field sobriety (FTS) tests:

If the driver takes the tests and passes them, the cop may suspect that the driver is under the influence of not alcohol but rather drugs. (Drivers can refuse to submit to the PBT and FTSs, but cops interpret their refusal as evidence they have something to hide. Plus, refusing to take the PBT will cause the police to confiscate the person’s license under NRS 484C.150.)

At this point, an officer with special training in drug recognition evaluation (DRE) may be called to take over the investigation. If the cops decide to arrest the driver for DUI of drugs, the driver will be required to submit to a DUI blood test.

Under Nevada law, all drivers arrested for DUI give “implied consent” to submit to a chemical test (such as a blood test). If the driver refuses to take the blood test, the officers must get a warrant. Then the officers may use “reasonable force” to constrain the driver to get the blood sample.3

Note that the suspect may at his/her own expense choose a phlebotomist of his/her own choosing to administer the blood draw.4

Also note that refusing to take a DUI blood test can be used as evidence against the defendant at trial. Additionally, the Nevada DMV will revoke the defendant’s license for one (1) year.5

The standard punishments for “DUI prescription drugs” in Nevada are the same as for drunk driving and driving under the influence of illegal narcotics.

The sentence gets harsher with each successive DUI within the past seven (7) years.6 And a DUI incident that causes a victim to sustain substantial bodily harm is an automatic felony:7

Learn more in our article on Nevada DUI penalties.

3. Can I get the charge reduced or dismissed?

Note that Nevada law prohibits prosecutors from outright dismissing DUI charges unless they have significant problems with their evidence. But depending on the case, getting DUI charges dropped may still be possible.11

Also note that there is always the option to take the DUI case to trial. If the judge or jury returns a “not guilty” verdict, then the defendant gets acquitted and can pursue a record seal right away.

DUI defendants who are addicted to prescription drugs may be eligible for Nevada DUI Court, an intensive rehabilitation program that allows the defendant to avoid lengthy jail sentences. And upon successful completion of DUI Court, the DUI conviction may be reduced to a lesser charge.

Defendants arrested for DUI of prescription drugs keep their driver’s license during the several weeks it takes the police to test their blood. If the results come back positive for drugs, the Nevada DMV notifies the defendants by mail that their license will be revoked. The length of the revocation depends on the defendant’s DUI history:

Recall that drivers suspected of DUI of prescription drugs are required to take blood tests and not breath tests. Breath tests cannot detect drugs, only alcohol.14

A DMV hearing is like a mini-trial, except it is civil rather than criminal. There is an administrative judge presiding. And the defendant and his/her attorney get to present evidence and make arguments that the defendant was not under the influence.

5. How do I fight the charges?

Note that it is not an affirmative defense to “DUI of prescription drugs” charges that the driver had an unexpected reaction to the drug.

It depends on what charge the defendant was ultimately convicted of:

Driving under the influence is usually not a deportable crime. But a non-citizen charged with possessing prescription drugs without a valid and current prescription could face deportation for committing an aggravated felony.20

Therefore, a non-citizen charged with a criminal offense in Nevada should seek experienced legal counsel as soon as possible to try to get the case dismissed or reduced to a non-deportable offense, if necessary.

Arrested for DUI? Call us for help…

If you are facing charges for “driving under the influence of prescription drugs” in Nevada, call our Las Vegas criminal defense lawyers. Perhaps we can reach a resolution with the D.A. that results in your case getting reduced or dismissed. And we are always ready to take your case to trial and fight for a “not guilty” verdict.