It is often possible to convert the jail time to community service and the license revocation to a restricted driver’s license with an ignition interlock device. It may also be possible to get the DUI charge reduced or dismissed.

The penalties increase if

A DUI first is when someone gets charged for operating a motor vehicle drunk or high, and the person had no prior DUI cases in the last 7 years. Even drivers who are not impaired can be convicted of “DUI per se” for having either:

First offense DUI offenders have to wait 7 years after the case ends to get a record seal. But it may be possible to plea bargain a DUI first down to dismissal or reckless driving (NRS 484B.653), which can be sealed after only 1 year.

It is not uncommon for law enforcement to make mistakes while executing a DUI arrest. And the tools and tests they use to determine intoxication levels are unreliable. So a defense attorney would conduct a thorough investigation to show that the state’s evidence is not solid enough to support a conviction.

For a general overview, go to our article on Nevada DUI penalties.

In this article, our attorneys will discuss 4 key things to know about dealing with a 1st DUI charge in Las Vegas: 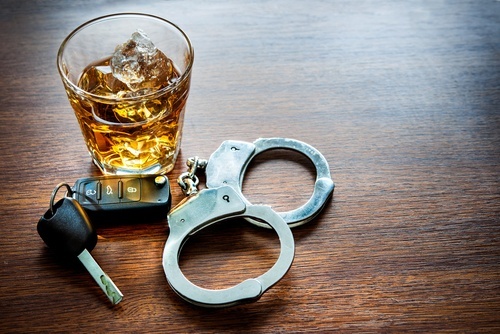 A first time DUI offense without injuries is prosecuted as a misdemeanor in Nevada.

1. Can I go to jail for a DUI first in Las Vegas, Nevada?

It is possible but unlikely. A judge has the discretion to impose the maximum misdemeanor penalty of six (6) months in jail.1

But in practice, defendants who get convicted of a DUI 1st get the following minimum mandatory sentence:

Note that DUI defendants who were transporting a child under 15 at the time of the arrest may face harsher punishments than normal. Examples include a higher fine or some mandatory jail time.6

Finally, note that Nevada law makes no distinction between prior DUIs that occurred in Nevada or elsewhere in the U.S.

Example: Greg was convicted of DUI 1st in California following an arrest on January 1, 2018. Then on January 1, 2020, Greg was arrested for driving under the influence of alcohol in Henderson, Nevada. Since the previous drunk driving arrest occurred within seven (7) years from this current arrest, Greg will face DUI 2nd charges in Nevada. It makes no difference that the previous arrest occurred out-of-state.

Read about laws for drunk drivers under 21.

If the defendant’s blood alcohol concentration was 0.18 or greater at the time of intoxicated driving arrest, the judge will also order these additional penalties:

Read about the penalties for refusing to give consent to take a breath or blood test.

If a defendant pleads guilty (or no contest) to 1st offense of operating a motor vehicle under the influence in Nevada, the court will require that he/she sign an “admonishment of rights” form. (Click click here for an example.) This document outlines how driving under the influence is a “priorable” crime, meaning that the punishments get greater with each successive conviction.

2. What happens to my driver’s license and criminal record?

Every DUI first offense arrest opens two separate cases that operate independently of each other:

Note that commercial drivers arrested for driving under the influence face a one (1) year revocation of their commercial driver’s licenses (CDL). It does not matter if they were driving a personal vehicle at the time of the drunk driving arrest. Also, note the revocation will last three (3) years if the driver was transporting hazardous materials 11

People whose license get revoked on a DUI first will have to pay the following fees to get the license back:12

DMV hearings can be tough to win. This is because DMV hearings demand a much lower standard of proof from the state than criminal trials do. But it may still be possible to win a DMV hearing if there are problems or inconsistencies in the state’s evidence, or if the arresting officer fails to attend the hearing.

A drunk driving defendant may be eligible to apply for a “restricted license” right away if the defendant installs an ignition interlock device.

A restricted license permits the defendant to drive only to work, school, grocery stores, medical appointments or court-ordered child visitation. All other driving privileges remain suspended. Click here for the restricted license application.14

The record seal process can take several weeks and involves a lot of paperwork and back-and-forth with the district attorney. Defendants are advised to hire a criminal defense attorney to handle the long and complicated process. Medical conditions like GERD can cause falsely high BAC levels on a breath test.

3. How can a defense attorney help?

DUI lawyers are experienced in fighting criminal charges for operating a vehicle under the influence. Three common DUI defenses include:

But police officers often lack NHTSA training. And they make critical mistakes when giving instructions and rating the suspect’s performance. If a DUI attorney can invalidate the field sobriety test results in the case, the D.A. may be left with insufficient evidence to prosecute.

There are many physical and medical conditions that can cause an Intoxilyzer 5000 EN breathalyzer to register falsely high BAC numbers. Just some of these include:

Rising blood alcohol is a biological phenomenon where a person’s BAC rises after he/she stops drinking. So it is plausible that someone who drank wine at dinner had a legal BAC when he/she was initially pulled over. Then an hour or two later when the police administered the chemical test, his/her BAC may have risen to illegal levels.

A good defense lawyer will examine every aspect of the matter including the initial confrontation between the driver and police, how the arrest was conducted, how the BAC was determined, and whether there were any witnesses. Other possible defenses to a Nevada drunk driving charge are:

4. Can I get a first time DUI reduced or dismissed?

Depending on the case, a first time case of intoxicated driving may be reduced to reckless driving or dismissed. However, Nevada prosecutors are prohibited from pleading down charges for driving under the influence unless a guilty verdict is obviously unattainable.21 Therefore, the DUI lawyer’s job is to convince the prosecutors that their evidence is too inadequate and unreliable to sustain a conviction.

Certainly, the ideal scenario is to get the entire case dismissed. Prosecutors do this only when it is clear the defendant was sober and had a legal BAC of alcohol or drugs.

The next best and more common scenario is for the prosecutor to reduce the drunk driving charge to a reckless driving charge.22 Prosecutors typically do this when the total evidence indicates that the defendant was guilty, but the police made a procedural mistake. An example would be administering the breath or blood test slightly after the two-hour post-arrest window.23

Note that drunk driving defendants in any Clark County justice court may be able to plea bargain the charge down to “careless driving.” This ordinance-enacted offense is similar to reckless driving, except that it carries only six (6) demerit points as opposed to eight (8).26

Defendants suffering from alcoholism may be eligible for Misdemeanor DUI Court (aka the Moderate Offenders Program). Upon successful completion of this alcohol rehabilitation program, the DUI conviction may be reduced to a lesser offense, such as reckless driving.

DUI Court usually lasts one (1) year and costs thousands of dollars. The defendant is required to participate in counseling, court monitoring, alcohol testing, wearing a SCRAM anklet, and other terms.27

Drunk driving defendants always have the option of going to trial. At trial, the prosecutor has a high burden of proving guilt beyond a reasonable doubt. But since first-time drunk driving cases are only misdemeanors, defendants are entitled to just a bench trial (where the judge decides the verdict), not a jury trial.28

In practice, juries are more likely than judges to find defendants not guilty. Part of the reason is that judges have presided over many cases, and experience has hardened them.

Las Vegas Metropolitan Police Department (LVMPD) uses for background checks. SCOPEs are printouts of a person’s past arrests and convictions, if any. A current and valid SCOPE is necessary in order to complete the petition for a Nevada criminal record seal. Below our Las Vegas criminal defense attorneys discuss five things to know in order ...

Can I withdraw a guilty or no-contest plea in Nevada?

A defendant is at liberty to ask a Nevada court to withdraw his/her plea at any time. However, courts are more likely to consider the request if sentencing has not yet occurred. If sentencing has already happened, the judge may presume that the only reason the defendant wants to withdraw the plea is to try ...