Can I consult a lawyer before taking Nevada "DUI sobriety tests?"

The Horizontal Gaze Nystagmus (HGN) Test is a non-invasive eye exam that police administer on suspected drunk drivers in Nevada. Depending on the results of the HGN, preliminary breath test, and other field sobriety tests, the officer may arrest the driver for violating Nevada DUI Law.

On this page, our Las Vegas DUI Defense attorneys answer frequently-asked-questions about the HGN exam in Nevada drunk driving cases. (Click on a question below to go directly to that topic.) 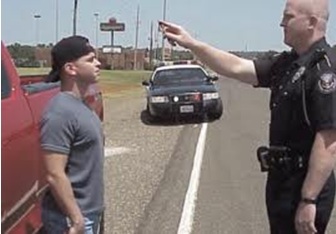 The Horizontal Gaze Nystagmus (HGN) test is a field sobriety test Nevada police use to help determine whether a driver has been driving under the influence.

1) What is the Horizontal Gaze Nystagmus Test in Nevada DUI cases?

The Horizontal Gaze Nystagmus (HGN) Test is a “field sobriety test” that Nevada police administer on suspected drunk drivers. It involves the officer holding up a finger or pen…called a “stimulus”…in front of the suspect’s eyes, and the suspect is instructed to follow the stimulus with his/her eyes as the officer tracks the stimulus horizontally from side to side. If the suspect’s pupils exhibit nystagmus (an involuntary jerking) while following the stimulus, the police may presume the suspect has an illegal blood alcohol content (which is .08% or higher in Nevada).

2) When do police administer it?

The Horizontal Gaze Nystagmus (HGN) Test typically occurs within 10-to-30 minutes of when the police officer first makes contact with the suspected drunk driver. 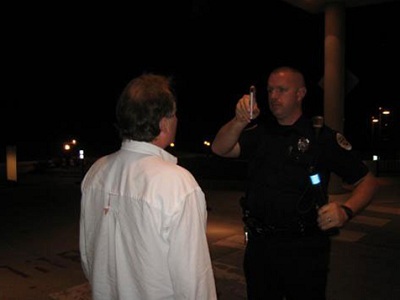 People suspected of drunk driving in Nevada will be asked by the cops to perform a Horizontal Gaze Nytagmus Test, a Walk-and-Turn Test, and a One-Legged Stand Test.

Example: A Nevada Highway Patrol cop is driving down the I-15 and notices someone allegedly driving a car erratically. Then the cop pulls over the driver and asks for his/her license and registration and checks if the driver has any warrants out for his arrest. Meanwhile, the cop is trying to detect the odor of alcohol, whether the drivers’ eyes are bloodshot and glassy, and if the driver is speaking in a slurred manner or is otherwise appearing inebriated. The cop will also ask the driver if he/she drank. If at that point the cop believes the driver may be under the influence, the cop will demand that the driver exit the car in order to perform three field sobriety tests (the HGN test, the walk-and-turn test, and the one-legged stand) and preliminary breath test. If the test results indicate that the driver is intoxicated, the cop will arrest the driver and book him at the police station.

Note that sometimes police are unable to administer the HGN if the suspect is injured or too intoxicated to take instructions.

3) How do police administer it?

The Nevada police officer stands in front of the suspect with his/her weapons away from the suspect and explains that he/she is going to check the suspect’s eyes. The officer will also ask the suspect to take off any glasses or remove any hard contact lenses.

In short, the officer checks for three distinct things in either eye: lack of smooth pursuit, distinct and sustained nystagmus, and the onset of nystagmus prior to 45 degrees.

4) How are results measured? What is failing? 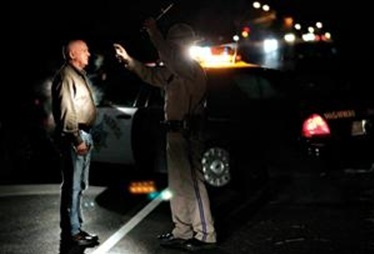 Showing four, five, or six “clues” of nystagmus is failing the HGN Test in Nevada.

As explained in the previous question, Nevada police are watching out for three (3) signs of nystagmus in each eye, totaling six (6) signs of nystagmus in all. Law enforcement calls each of these signs a “clue.” According to the National Highway Traffic Safety Administration (NHTSA), suspects who display four or more clues (signs of nystagmus) likely have an illegal blood alcohol level of .08 or above. Therefore, a failing HGN score is when the suspect displays four to six clues. A passing HGN score is when the suspect displays 0 to 3 clues.

Yes. In fact, it is advisable for a DUI suspect to refuse to take the HGN Test (and other field sobriety tests) because it will leave the prosecution with less evidence to support a guilty verdict. However, refusing to take field sobriety tests almost always guarantees that the officer will arrest the suspect anyway. And once the suspect is arrested, he/she is legally obligated to submit to a chemical test such as the breath test or blood test.

6) Does passing or not taking the HGN Test mean I will not get arrested for DUI?

Not necessarily. If the suspect scores 3 or fewer clues in the HGN Test but fails the other field sobriety tests and the preliminary breath test, the officer will probably elect to arrest the suspect for DUI based on the totality of the circumstances. A failed HGN test is not a prerequisite for a Nevada DUI arrest.

Conversely, failing an HGN does not guarantee that the suspect will be arrested for DUI. If the officer believes the nystagmus is caused by something other than alcohol or drugs, and if the suspect is not otherwise displaying signs of intoxication, the officer may elect not to arrest him/her for DUI.

There are some cases where a suspected drunk driver never takes the HGN test because he/she refuses to do it or he/she is too incapacitated. But even in these circumstances, the police may choose to arrest the suspect for DUI if other evidence suggests he/she was drinking. A person can still be arrested for and convicted of DUI without having taken an HGN test.

Passing an HGN Test does not guarantee that the suspect will escape arrest for drunk driving in Nevada.

Not very. NHTSA claims that the HGN Test is 77% reliable in determining whether a driver is under the influence of alcohol.1 Therefore, approximately one out of four people who fail the HGN is in fact not intoxicated.

8) How do DUI defendants contest the results of the HGN Test?

There are several ways that a DUI defense attorney can contest a failing HGN score. Possible reasons for a false HGN score include:

Note that none of these factors by itself may cause Nevada DUI charges to get dropped in Nevada. Judges often look to the totality of the circumstances to determine whether a suspect was under the influence. But the more issues that defense attorneys can raise to call into question the HGN Test’s accuracy, the better for the defendant. 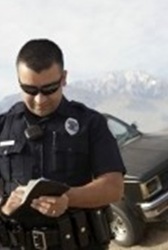 Nevada cops may compromise the result of an HGN test by administering it wrong.

Yes, Nevada courts recognize the HGN as evidence of whether a driver is under the influence. In the case State, Dept. of Motor Vehicles and Public Safety v. McLeod, the Nevada Supreme Court held that the arresting officer was correct to administer an HGN test on a driver even though he had a head injury; the Court reasoned that because the driver smelled of alcohol and had bloodshot eyes, the officer had sufficient cause to believe the driver was under the influence and was therefore justified in administering the HGN Test.2

10) Is it the only field sobriety test?

No. Nevada police administer a total of three (3) standardized field sobriety tests (FSTs) on suspected drunk drivers. In addition to the HGN, the tests include the one-legged stand test and the walk-and-turn test. Studies show that the HGN test is more reliable than the other two FSTs.3

Most significantly, note that getting arrested for DUI does not necessarily mean the driver will ultimately be convicted. Even if the suspect failed the HGN Test and/or other field sobriety tests, it still may be possible to show that the prosecutor lacks sufficient evidence to prove guilt beyond a reasonable doubt.

Arrested for DUI in Nevada? Call an attorney…

Are you facing charges for “drunk driving” in Nevada? Call our Las Vegas criminal defense attorneys for a consultation. We may be able to work with the prosecutor to reduce or dismiss your charges. And if necessary, we are prepared to take your case to trial and fight for a non-guilty verdict.

A 72-hour hold under Nevada law – also called an emergency admission, Legal 2000 or L2K – is when a person with mental illness gets placed under medical observation, evaluation, and treatment for three days. The purpose of a 72-hour hold is to keep these patients safe while the next steps are determined. The hospital ...

If you’ve been charged with a crime in Reno, Nevada, you have a right to a “speedy trial” under both the U.S. Constitution and Nevada law. But what you may think of as “speedy” may not be the same as what the law considers it to be for purposes of determining whether your rights have ...

What’s the difference between voluntary and involuntary manslaughter in Nevada?

Ten locations where Arizona gun laws prohibit the concealed carry (as well as open carry) of firearms include: The secured areas of airports (beyond the TSA checkpoint). Correctional facilities, including jails, prisons, detention centers, etc. Polling places on election day. Nuclear or hydroelectric generating stations. School grounds. (In vehicles on school grounds, any firearm must ...