Can I refuse DUI breath tests in Nevada?

Nevada DUI suspects may be required to submit to two breath tests to measure their blood alcohol content (BAC):

Only the EBT breath test results are admissible as evidence if the case goes to trial.

Refusing to take the breath test

Refusing to take the PBT will result in the police officer confiscating the suspect’s driver’s license and arresting him/her for DUI.

DUI arrestees who refuse to take the evidentiary breath test face a 1-year driver’s license revocation and can be forced to submit to an evidentiary blood test.

A skilled Nevada criminal defense attorney may be able to get the breath test results excluded from evidence. 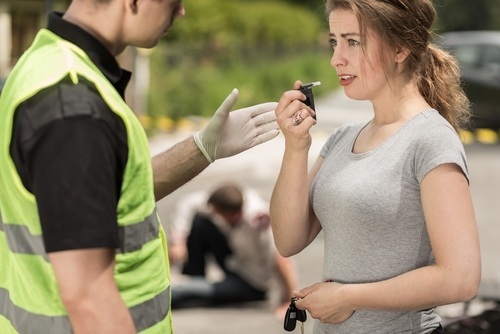 1. What are breathalyzers in Nevada DUI cases?

Breathalyzers are mechanical devices that measure people’s blood alcohol content (BAC) through their breath. Police agencies such as the Nevada Highway Patrol and Las Vegas Metropolitan Police use breathalyzers on people suspected of having driven under the influence of alcohol. Driving with a BAC of .08 or higher is per se illegal.1

1.1. How the breathalyzer works

The type of breathalyzer Las Vegas police use on DUI arrestees is the Intoxilyzer 8000. It is manufactured by CMI, Inc., in Owensboro, Kentucky. And it was approved for use in Nevada by the Nevada Committee for Testing on Intoxication.

The Intoxilyzer 8000 uses a two-filter wheel infrared (IR) spectrometer to detect organic vapors in a breath sample. Although it takes about 20 minutes to warm up, the device has a “standby” mode that permits it run continuously without depleting its resources.

Unlike previous models which had a pressure switch, the Intoxilyzer 8000 uses a flow sensor. In order for the flow sensor to work, the following four conditions must be met:

Finally, the BAC results get printed on paper. An example of the printout from the Clark County Detention Center is above/ to the right.2

The machine uses the “Dry Gas Standard” to conduct control tests during the breath test sequence. The correct gas concentration is 0.08 g/210L with an acceptable range from 0.075 to 0.085  g/210L. When any analysis result falls outside of the acceptable range, the machine displays CONTROL OUTSIDE TOLERANCE.3

Below is the “checklist” that Nevada police must complete when administering an evidentiary breath test on people arrested for DUI of alcohol:

Each test is different and serves a distinct purpose:

When DUI suspects are pulled over in Nevada…or when police arrive at the scene of an accident where DUI is suspected…the police will probably ask the suspects to do three things:

The PBT is also called a roadside breath test or preliminary alcohol screening (PAS). It is meant to give the police officer an initial idea of whether suspects are under the influence of alcohol or not.

If the case goes to trial, PBT results may come in as evidence to show the police had “reasonable grounds” for arrest. But PBT results cannot be used to show that a defendant was driving under the influence.

Note that if the police arrest a DUI suspect prior to giving the PBT, the police may not then give the suspect a PBT without his/her consent to take it or without a warrant (or valid warrant exception). Otherwise, the PBT may qualify as an unlawful police search.4

Motorists arrested for DUI in Nevada are legally required to submit to an evidentiary breath test (EBT) or blood test. (If the police believe the suspect is high instead of drunk, the suspect must submit to a blood test.)

Similar to Title 17 in California, Nevada law outlines strict rules that police must follow when administering an evidentiary breath test and analyzing the results. The regulations include the following:

Unlike PBT results, EBT results can be used against DUI defendants in court to show that their BAC was .08 or above.6

3. Am I required to take breath tests in Nevada DUI cases?

Legally, yes. And there are dire consequences for refusing…

Note that DUI suspects are expected to submit to an evidentiary blood test if the police suspect them of driving while impaired by drugs. This is because breathalyzers cannot detect controlled substances.

People arrested for drunk driving in Nevada can elect to take a blood test instead of a breath test. Since taking blood is a more complicated procedure than using a breathalyzer, DUI defendants who choose the blood test have to pay all associated costs if:

Note that if police believe the arrestee is under the influence of drugs, the defendant must take a blood test instead of a breath test.8

4. How accurate are the breathalyzers that Las Vegas police use?

Not very accurate considering so many variables unrelated to alcohol can cause false positives. (Scroll down to the next section for a list of some of these variables.)

One problem stems from the manufacturer’s refusal to share the Intoxilyzer 8000’s source code. The manufacturer claims it is a trade secret, but hiding the source code precludes researchers from running comprehensive tests on the machine’s efficacy. Just in the last few years, judges in Florida, Oklahoma, and even Ontario, Canada have ruled that the Intoxilzer 8000 cannot be trusted.9

That is why it is vital defendants retain a drunk driving defense attorney to uncover any and all evidence suggesting that their breathalyzer was defective, unreliable or mishandled in their Nevada DUI case.

5. How can breathalyzer results be challenged in Nevada courts?

Depending on the facts of the defendant’s case, a criminal defense attorney may explore the following procedural, environmental, or physiological defenses when fighting a DUI charge:

Therefore, numerous factors can cause a breathalyzer to give falsely high readings. Consequently, defendants should tell their attorney everything they can remember regarding the DUI incident: Medical history, diet, health, even what they ate or drank that day. Something that seems irrelevant may be the key to fighting the charge.

If a criminal defense attorney can cast doubt on the accuracy of the breath test, then the court might exclude it as evidence. And once the BAC results are excluded, the prosecution should be more willing to reduce the drunk driving charge to reckless driving or to throw it out completely.

We are here to help

If you have been arrested for DUI in Nevada, you are invited to contact our Las Vegas criminal defense attorneys for a free phone consultation. Whether you took a breath, blood or urine test, we are skilled in all the ways to try to exclude the results from evidence so your DUI charge may get reduced or dismissed completely.

Arrested in Colorado? Go to our article on DUI breath tests in Colorado.

How to file a restraining order in Nevada – 3 Steps

Do I Need to Get Out of My Car If a Nevada Police Officer Orders Me To?

What is the new left lane law in Las Vegas, Nevada?