How do I post bail in Las Vegas, Nevada?

A bail bond in Las Vegas is money that a bondsman pays a Nevada court to release a suspect from jail after arrest. People who cannot afford to pay bail themselves can hire a bondsman, generally for 15% of the bail amount. The bondsman pays the full amount (“posts bond”) to the court.

The trade-off of using Las Vegas bail bonds is that the person who hires the bondsman never gets that 15% back. When the case ends and the court returns (“exonerates”) the bail, it all goes to the bondsman. 1

In this article, our Las Vegas criminal defense attorneys will answer the following top 7 questions about Nevada bail laws and bail process: 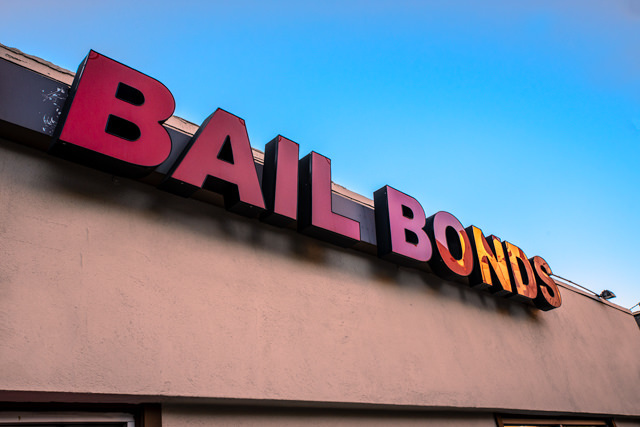 Many Nevada defendants rely on Las Vegas bail bonds to get released from jail.

1. How can I bail a person out of jail in Nevada?

First contact the jail for the most up-to-date information on how and where to post bail. Inmates are usually released within a few hours of payment.

If the bail amount is too high, contact a bail bondsman. Las Vegas bail surety bonds are big business. Bail bond agents usually have their offices within walking distance of the court and jail. People who hire bail bondsmen may have additional costs as well, including notary fees and costs of travel.

Everyone who has the means to bail out is advised to. Defendants who are out on bail can often continue doing their jobs and have more frequent contact with their criminal defense attorneys. They can also seek help, such as rehab or counseling that may look good to the judge in the case.

The court holds a bail hearing. This is the court date the prosecution and defense present evidence and arguments for and against imposing bail. The judge considers these factors when determining the amount of money for bail:

Note that when judges agree to release a defendant following an arrest, the judge may “may impose such reasonable conditions on the person as it deems necessary to protect the health, safety and welfare of the community[.]” Examples of such condition include:

According to the Nevada Supreme Court, defendants who cannot afford to bail out are entitled to a hearing, where the prosecution has the burden to show by clear and convincing evidence that bail is required to protect the community and ensure the defendant’s appearance at future court appearances. If the judge decides that bail is necessary, he/she must take into consideration the defendant’s financial resources (and the above factors) when setting the amount. Furthermore, this reasoning must be stated on the record.3

If the judge agrees to release the defendant with no bail, that is called an OR release. Judges may grant O.R. release for “good cause.” (Learn more about this in section 4.)

Sometimes judges refuse to grant bail at all. This typically occurs in murder cases or when the defendant is a flight risk or safety risk. Then the defendant remains in custody pending the outcome of the case. Inmates get released within a few hours of posting bail.

3. Is it possible to get bail reduced?

It is possible. The defense attorney can always request another bail hearing.

Bail hearings are like mini-trials where both sides can present evidence and arguments. The defense would argue for reducing or eliminating bail. And the prosecutors would argue to maintain or increase the bail.

Finally, the judge will make a decision. If the judge holds firm, the defendant can always request another hearing down the line.

Note that Las Vegas bail bondsmen are not attorneys. They may not ask for bail hearings and reductions. Only defendants and their lawyers may do this.

4. How does a person get an OR release under Nevada bail laws?

Judges decide whether or not to grant OR release. (Scroll up to section 2 for more information on this decision.) OR is short for own recognizance. It is when the judge releases defendants from jail without them having to put up any bail. They just have to promise to show up to future court appearances.

Defendants will get OR release “if it appears to the court that it can impose conditions on the person that will adequately protect the health, safety and welfare of the community and ensure that the person will appear at all times and places ordered by the court.”4

Defendants facing minor charges, who are not flight risks, are not dangerous, and with no other criminal history are more likely to get OR release. Obviously, people granted OR release do not need Las Vegas bail bonds.

5. What happens if a person violates bail conditions?

Judges have the discretion to offer defendants a second chance to stay out on bond. Otherwise, the judge may order that the defendant be taken into custody for the duration of the case. The defendant may be found in contempt of court. And the court keeps the bond money forever. This is called bail forfeiture.5 People who violate their bail conditions may be remanded to jail, and the bail money may be forfeited.

6. What happens if a person makes bail but fails to show up for court?

The judge will issue a bench warrant for failing to appear at court (NRS 199.335). While the warrant is outstanding, the defendant can be arrested at any time.6

The defense attorney can file a motion to quash the warrant. Then the judge would hold a hearing to decide whether the warrant stands. Judges usually agree to quash (recall) warrants if it was the first-time the defendant missed court.

Acceptable forms of payment for posting bail depend on the facility and criminal charge.

For cases in Las Vegas Justice Court, go to the Pretrial Services window at the CCDC. It is located at 330 S. Casino Center Blvd. It is open 24/7.

For cases in Clark County District Court, go to the Regional Justice Center, 3rd floor. Hours are Mondays through Fridays, 8:00 AM to 5:00 PM. The address is 200 Lewis Ave. After business hours, go to the CCDC.

There is a $10,000 limit on cash bail and Visa and MasterCard. Cash must be in the exact amount. CCDC also accepts money orders and cashier’s checks. There is a $50 filing fee on all Las Vegas bail bonds.

Call Pretrial Services at (702) 455-3462 for more information. Also see our article on posting bond at the CCDC.

Go to the Las Vegas City Jail at 3200 Stewart Ave. It is open 24/7. They accept cash (exact amount), Visa, MasterCard, and Discover. Not American Express.

Go to Henderson Court at 243 S. Water Street. Business hours are Mondays through Thursdays, 7:45 AM to 5:00 PM. After business hours, go to the bail gate off S. Texas Ave.

After hours, post bail at the CCDC in Las Vegas. It is at 330 South Casino Center Drive.

Call the Laughlin police at (702) 298-2223 for more information. Also see our article on posting bond at the Laughlin Jail.

If you or a loved one is in custody, call our Las Vegas criminal defense lawyers to discuss the case for free. We may be able to the bail lowered or secure an OR release.

In California? Learn about bond procedures and preventive detention hearings.

In Colorado? Learn about bond procedures.

“Suspects” Should Never Give a Statement to the Police

Persons that are detained by the police for suspected criminal activity should NEVER give a statement. Whether you are being detained for a simple traffic violation or for a serious crime, DO NOT make a statement. You should always invoke your right to remain silent. The majority of the public think the police must advise ...

When does the “open and obvious” defense apply in Nevada premises liability cases?

Under Nevada premises liability laws, the “open and obvious” refers to hazards that are so plain to see that any reasonable person would be aware of them and take care around them. Therefore people who suffer injuries because of an open and obvious condition – such as a lake or a cliff – might not have ...

What is Hit-and-Run in Las Vegas?

Do not leave the scene if you are driving in Las Vegas and hit a pedestrian or cyclist. Hit-and-run in Las Vegas is a major crime. The penalties for leaving an accident scene or neglecting to lend help to others who may be hurt can result in jail time. There are several hit-and-run laws in ...