Drivers need an SR-22 insurance policy to reinstate their suspended licenses following a Nevada DUI and certain other traffic violations. An SR-22 is a “certificate of financial responsibility” statement issued by a driver’s auto insurance company.

The time period drivers need to maintain SR-22 with the Nevada Department of Motor Vehicles varies depending on the case. After a DUI, an SR22 is required for three (3) years following a license suspension.

All states have some form of SR22 requirement, and having an SR22 will usually cause the driver’s auto insurance policy rates to spike. But a skilled Nevada criminal defense attorney may be able to avoid a license suspension altogether by getting the traffic charges dismissed and winning a DMV hearing.

In this article, our Las Vegas DUI attorneys explain what an SR22 is in Nevada, when it is needed, and how to get it. Click on a topic to jump to that section:

A Nevada SR22 insurance document is issued by a car insurance provider that serves as a “proof of financial responsibility” for high-risk drivers. It verifies that the driver currently has the minimum coverage of liability insurance legally required to maintain driving privileges in Nevada. The minimum liability coverage allowed is:

People who have had their driver’s licenses suspended by the Nevada DMV often have to file an SR22 with the DMV before they can get reinstatement of the license.1 It is irrelevant whether or not the person owns a vehicle . . . non-owner SR-22 forms are available.

And if the person does not get an SR22 after driving under the influence, the driver’s license remains suspended indefinitely.

3. When else is SR-22 necessary to keep a driver’s license in Nevada?

People need an SR-22 certificate if they cause a car accident without insurance, or if they are caught driving with an insurance policy that has been expired for more than 90 days.4 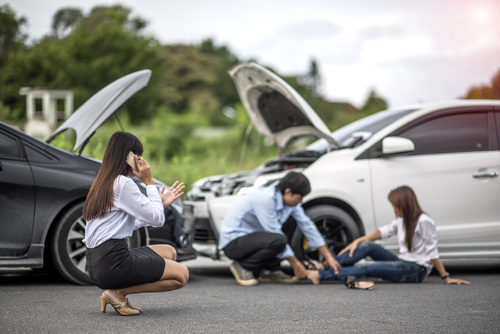 SR22 is necessary after causing a car accident without insurance.

The person contacts his/her car insurance agent and requests an SR22. There is usually a fee involved to file the SR-22. The insurer then notifies the Nevada DMV that the person has an SR22.5

Note that car insurance companies tend to see drivers with SR22 as “high risk” and may charge them higher insurance rate premiums in the future. See our article on how DUIs affect car insurance.

It depends on why the person’s driver’s license was originally suspended. The insurance requirements for DUI cases is that people file an SR22 with the Nevada DMV for a three-year period from the date they reinstate their license.6

Note that the Nevada DMV does not notify drivers when their SR22 period is over.  So drivers should contact the DMV if they are uncertain about when they no longer need an SR22.

If someone’s car insurance lapses or gets canceled before his/her SR22 period ends, the insurance company will issue an SR-26 form to the DMV.  An SR-26 indicates a discontinuation in auto insurance coverage.

At that point, the DMV will notify the uninsured driver by certified mail that they will suspend the driver’s vehicle registration in ten (10) days unless he/she can secure new insurance and another SR-22.

Unfortunately, a lapse or cancellation in insurance coverage “restarts the clock” for SR22 coverage. For example, a DUI defendant whose insurance gets canceled two (2) years into a three (3) year SR22 period would need to get a new SR22 for another three (3) years.7

7. Can an SR-22 requirement be satisfied through a motorcycle insurance policy?

It depends on the case. If the driver had a DUI with a motorcycle, the SR22 can usually be satisfied through motorcycle insurance.

8. Do these rules apply to out-of-state drivers?

People with out-of-state licenses will usually have to follow similar SR22 rules in their home state.

9. What happens if I move away from Nevada?

People who move out of state would still need to fulfill their SR22 filing period for the state of Nevada despite no longer living there.

The best way to try to avoid these requirements is to retain criminal defense counsel as soon as possible following the traffic citation or arrest. The lawyer can then request a DMV hearing to contest the driver’s license suspension. If the hearing is successful, the person may no longer be required to get the SR22.

SR22 usually costs more than $100 a month, but it depends on the insurance carrier. Free quotes for both owner SR22 and non-owner SR22 insurance are available online.

How does Live Scan fingerprinting work in Las Vegas?

What is The Age of Majority in Nevada?

Eighteen (18). Once a person reaches 18-years-old in Nevada, he/she is the “age of majority” and is considered an adult for all legal purposes. Some of the rights that belong to people who reach the age of majority include: right to serve on a criminal or civil jury right to vote right to get married ...