Las Vegas Criminal Defense Attorneys » Nevada Crimes by NRS Section » NRS 193.165 - Use of a Deadly Weapon in the Commission of a Nevada Crime NRS 193.165 is the Nevada law that increases the sentence for use of a deadly weapon (such as a gun or knife) in the commission of a felony, unless use of the weapon was already an element of the crime. This deadly weapon enhancement can double a criminal sentence, adding an additional 1-to-20 years of prison time. 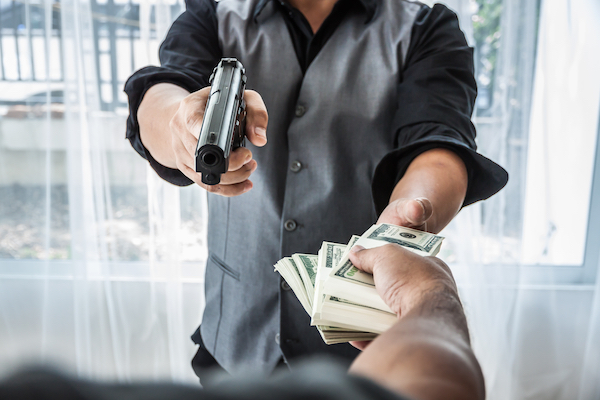 NRS 193.165 increases the penalties for using a weapon in the commission of a Nevada crime.

1. Is using a weapon a separate offense in Nevada?

Defendants who use weapons while committing a felony will not face extra charges. Instead, the judge will increase the sentence for the underlying felony conviction.

Example: Jasper holds up a cashier with a gun in Henderson. If caught, Jasper faces charges for robbery (NRS 200.380), a category B felony. Since he used a gun, the judge will impose an increased Nevada State Prison sentence for the robbery.

Therefore, using a firearm in the commission of a crime in Nevada is not a crime in and of itself. It is a sentencing enhancement to the underlying crime.1

When a person uses a deadly weapon in the commission of a felony, a Nevada district court judge may increase the underlying felony sentence by one-to-twenty (1 – 20) years. However, this enhanced sentence for using the weapon may not exceed the sentence for the underlying crime:

Example: A Clark County judge sentences Ted to 10 years for mayhem (NRS 200.280). Since Ted used a knife, the judge can increase the sentence by at most 10 more years because the underlying mayhem sentence is for only 10 years. So in all, Ted can serve a double sentence of 20 years total. 10 for the mayhem, and an additional 10 for using a knife while committing mayhem.

Nevada judges consider the following five factors when calculating the length of the enhanced sentence for using a deadly weapon in the commission of a crime:

Also, note that non-citizens convicted of crimes involving firearms face deportation as well. But a criminal defense lawyer may be able to get the charge dismissed or changed to a non-deportable offense.2

Courts may not grant probation – or a suspended sentence – to defendants convicted of using a weapon in the commission of either of the following four offenses:

Otherwise, the court may consider granting defendants probation in lieu of incarceration.3 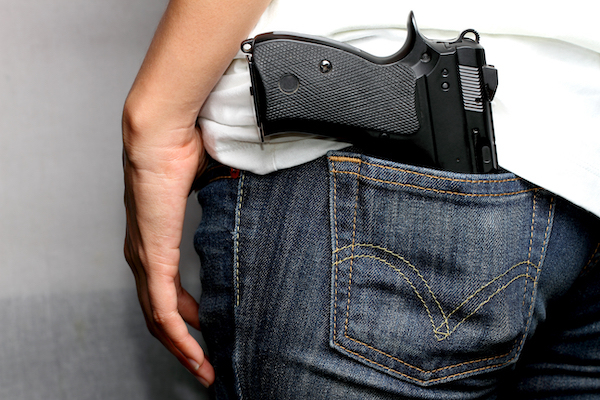 Flashing the closed or open carry of a weapon to cause fear in crime victims triggers the Nevada sentencing enhancement.

4. What weapons cause increased sentences?

Using any of the following 20 deadly or dangerous weapons while committing a crime in Nevada may result in an increased sentence:

5. What if the underlying crime required using weapons?

NRS 193.165 does not apply to cases where using weapons is a necessary element of the crime itself.

Example: Tom slips a pistol to an inmate during a prison visit, thereby committing furnishing a prisoner with a weapon (NRS 212.160). Here, Tom will not receive the weapons enhancement for giving a gun to his inmate friend. This is because the crime specifically concerns giving guns to prisoners. There is no way to commit this crime without use of a deadly weapon. Therefore, NRS 193.165 is inapplicable to this charge.5

6. What if the defendant never used the weapon?

Merely possessing a deadly weapon will not trigger the weapons enhancement under NRS 193.165. The defendant must have used it or displayed it to cause fear in conscious furtherance of the crime.6

Example: Neeraj carries a concealed firearm in his pocket. One day while his neighbor is out, he breaks into her home to steal her marijuana and other controlled substances. Here, Neeraj faces charges for burglary without the weapons enhancement. Even though he had possession of a firearm, he did not use the concealed weapon in conscious furtherance of the burglary.

Meanwhile, Oliver approaches a woman on the street and asks for her wallet. When she refuses, Oliver flashes the knife on his belt. The woman hands over the purse. Here, Oliver faces charges for robbery with the weapons enhancement. Even though Oliver did not end up brandishing or cutting with the knife, he used it to cause fear in his victim.

Note that all accomplices to a crime can face increased penalties for using a weapon even if all but one of the accomplices are unarmed.7

Example: Lena and Bella agree to kill their ex-friend’s cat with a knife. Lena holds the cat down, and Bella stabs it. Here, both Lena and Bella face charges of animal cruelty with the weapons enhancement. Even though Lena never touched the knife, she helped Bella carry out the stabbing. So under Nevada law, she shares criminal liability for using the weapon.

Also note that NRS 193.165 never applies to conspiracy (NRS 199.480) charges under state law. Using a weapon means “to put into action or service” or to “carry out a purpose by means of” the weapon. In contrast, conspiracy is two or more people agreeing to commit a crime. By definition, people cannot use a deadly weapon merely to conspire. 8

There are some Nevada gun crimes that NRS 193.165 never apply to:

Charged under federal law? See our article about the federal crime of using guns to carry out drug trafficking or violent crimes in the United States (18 U.S.C. § 924(c)).

Charged in California? See our article about firearm sentencing enhancements.