In this article, our Las Vegas criminal defense attorneys discuss how suspended sentences work in Nevada criminal law. Click on a topic below to jump directly to that section: 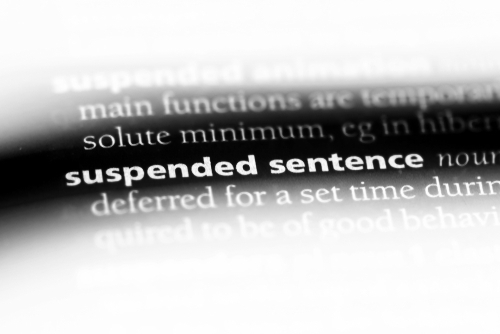 1. Definition of suspended sentences in Nevada

A suspended sentence is a jail or prison term that convicted criminal defendants do not have to serve as long as they abide by all the other terms of their Nevada criminal sentence.

Therefore, suspended sentences keep defendants out of jail while providing them with an incentive not to re-offend. Then if defendants do violate the terms of their sentence, the judge may impose the original jail or prison sentence.

Prosecutors sometimes offer defendants a suspended sentence as part of a plea bargain in return for not going to trial. If the judge agrees, he/she will order the suspended sentence during the case's sentencing hearing in Nevada.

One of the most common Nevada plea deals where judges suspend sentences is for a first-time conviction of misdemeanor DUI. As a misdemeanor, DUI carries a maximum possible jail sentence of six months. But in the vast majority of cases, judges will agree to suspend this six-month sentence as long as the defendant does all of the following:

Note that in some criminal cases, judges can also order a suspension of a fine payment. This means the defendant will not have to pay unless he/she violates the other terms of his/her sentence.

Nevada law gives judges the discretion to grant or deny suspended sentences in the vast majority of criminal cases. Predictably, some of the factors judges consider when making their decision include:

Judges have great discretion in deciding whether or not to suspend sentences.

But there are some cases where judges cannot grant a suspended sentence and some where they must:

2.1. When suspended sentences are prohibited

Nevada judges must not grant a suspended sentence to defendants convicted of either of the six most serious Nevada crimes. These include:

Additionally, Nevada judges must not grant a suspended sentence to defendants convicted of any offense where its statute specifically prohibits a sentence suspension. Common examples of these crimes include:

Finally, Nevada judges must not grant a suspended sentence to defendants convicted of the following crimes unless a required psycho-sexual evaluation shows they do not have a high risk of re-offending:

2.2. Where suspended sentences are required

Most defendants convicted of category E felonies in Nevada will have their sentence suspended.

3. Length of suspended sentences in Nevada

The maximum length of a suspended sentence depends on whether the crime is a felony, gross misdemeanor, or misdemeanor:

Suspended sentences for Nevada felony convictions may last a maximum of five (5) years.

Note that certain convicted felons face only a three (3)-year suspended sentence if they complete a treatment program. These usually include defendants who are either:

One slip can cause a judge to revoke a sentence that has been suspended.

Judges are not required to automatically revoke a suspended sentence and impose incarceration when defendants allegedly violate a sentencing term:

Instead, defendants get a probation revocation hearing where they can ask the judge for a second chance or explain that they were falsely accused of violating a sentencing term. Depending on the circumstances of the case, the judge may elect to keep the sentence suspended or remand the defendant to custody.

Note that once a judge officially closes a criminal case, any suspended sentence disappears, and the defendant will no longer be at risk of being incarcerated for that case. For example:

Example: Dominique is given a six-month suspended sentence for simple battery. The terms of her probation included avoiding further arrests for one year. After a year passes with no incident, the judge closes her battery case. Then the next day, Dominique gets arrested for battery again. Since her first battery case is already closed, this new arrest will not trigger the six-month suspended sentence from that first case.

Had Dominique in the above example gotten arrested prior the first battery case getting closed, then the judge may have ordered her to jail for six months on the first case. And that is separate from any jail Dominique may have to do if she gets convicted on battery for the second case.

Arrested in Nevada? Call our Las Vegas criminal defense attorneys for a FREE consultation at 702-DEFENSE (702-333-3673). We will do everything to try to keep you out of jail and to get your charges dismissed or reduced. As a last resort, we can also take your case to trial in zealous pursuit of a full acquittal.