Nevada law defines the crime of indecent exposure as exposing one’s genitalia or anus in public or in a private place open to public view. Under NRS 201.220, a first offense violation is a gross misdemeanor punishable by up to 364 days in jail and up to $2,000 in fines.

A subsequent offense is a Category D felony. The punishment carries:

Furthermore, the court orders indecent exposure defendants to register as a sex offender at the Tier I level. However, Tier I offenders in Nevada are not searchable to the public unless the victim (if any) was a child.

In many cases, a defense attorney can persuade the prosecutor to plea bargain criminal charges down to a lesser offense or a dismissal.

A judge may dismiss charges of indecent exposure if: 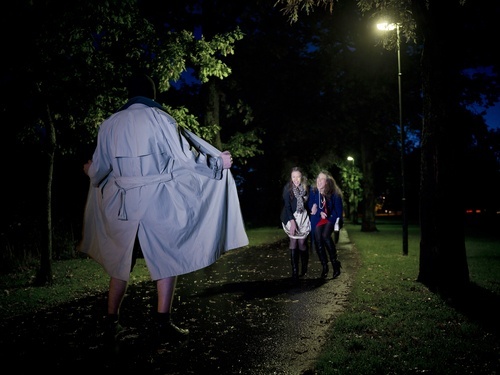 Indecent exposure in Nevada is when someone intentionally exposes the genitals or anus of him/herself or another person.

1. What is the legal definition of indecent or obscene exposure in Nevada?

It is a crime in Nevada for people to expose themselves or other people in an indecent or obscene way.1 According to the Nevada Supreme Court, this encompasses exposing a person’s genitalia or anus.2

In practice, Nevada police also arrest women for going topless and arrest men or women for mooning. But according to the Nevada Supreme Court, NRS 201.220 does not prohibit exposing breasts or buttocks.3

Therefore, defendants charged with indecent exposure for flashing their breasts or backsides should eventually get the cases dismissed once their attorneys remind the D.A. of the Nevada Supreme Court’s interpretation of NRS 201.220.

Example: Tom and Jan join their friends for a party at the Fiesta. After getting drunk, Tom takes off his underwear, and Jan flashes her breasts. A cop books them both at the Henderson Detention Center for indecent exposure. But Jan’s case should get dropped because NRS 201.220 does not criminalize bearing one’s breasts. However Tom could be convicted because NRS 201.220 does prohibit bearing one’s genitalia.

Most NRS 201.220 cases involve flashers, exhibitionists, or people engaged in sexual activity in public. Many defendants are partiers, patrons of adult bookstores, or people hooking up in parks or bathrooms.

Note that a person does not have to be around other people to be convicted of indecent exposure.

Example: John is walking around without clothes in his Reno home, where the shutters to the windows are all open. If caught, Tom could be booked at the Washoe Detention Facility for indecent exposure.

It is irrelevant in the above example that John is alone or that no one else actually witnessed it. By walking around unclothed in front of open windows where others could see him, John is inviting prosecution for indecent exposure.4

Note that it is not considered indecent or obscene exposure in Nevada for a mother to breastfeed her child. For more information, see our article on breastfeeding laws.5

Also note that going to the bathroom in public can also lead to indecent exposure charges. For more information, see our article on urination in public laws.6

2. Do it require sex offender registration?

Yes. However, NRS 201.220 defendants convicted of a gross misdemeanor instead of a felony are usually classified as Tier I offender. Tier I offenders cannot be searched in the Nevada Sex Offender Registry unless the victim — if any — was a child.

3. What are Nevada’s penalties for indecent exposure?

The punishment for violating NRS 201.220 turns on whether the defendant had prior sex crime convictions:8

Note that judges do take extenuating circumstances into account when doling out punishments. For example, a person who strips in a public place would probably receive a harsher punishment than someone who walks naked in front of an open window at home without realizing it.

Depending on the situation, the prosecutor may be willing to reduce the NRS 201.220 charge to a misdemeanor such as disorderly conduct that carries no sex offender registration.

If the defense attorney can demonstrate to the Clark County District Attorney that the evidence is insufficient or inadequate to sustain a conviction, the D.A. may drop the charges completely.

Which defenses would work best in fighting charges of violating NRS 201.220 depend on the unique circumstances of the case. The following are four common defense strategies:

Note that it is not a defense to NRS 201.220 charges that the defendant had no intention to offend anyone.9

It is not uncommon for the wrong person to be arrested for a crime someone else committed. This is especially typical in large crowds, where police may have trouble distinguishing between suspects.

Example: Wendy is attending the Electric Daisy Carnival when a policeman suddenly arrests her for flashing her vagina to the band. Wendy knows she is innocent, so her defense attorney obtains surveillance video of the event. The footage shows that the woman next to Wendy flashed but that Wendy remained clothed the whole time. When the D.A. sees that the police simply made a mistake and apprehended the wrong person, Wendy’s charges get dismissed.

Other evidence that may be valuable in these types of cases includes eyewitnesses and photographs. If the defense attorney can raise a reasonable doubt as to the defendant’s guilt, criminal charges cannot stand.

It is also not uncommon for people to falsely claim that their enemies have violated the law. Often, their motivation is to avenge some perceived wrong or to channel their anger.

But an experienced criminal defense attorney would try to find evidence that would impeach the accuser’s trustworthiness.

Example: Barbara is angry that she was rejected from her favorite sorority at UNLV. She leaves several angry voicemails with the sorority president Jennifer claiming that she would be sorry for rejecting her. Then Barbara calls campus police and claims she saw Jennifer on the quad sunbathing nude. Police arrest Jennifer. But when her defense attorney plays the voicemail for the D.A., the D.A. figures that Barbara made up the whole story and drops the charge against Jennifer.

Note that Barbara in the above example could face criminal prosecution herself for filing a false police report.

Sometimes police take a more conservative approach than what the law requires and arrest people for lawful exposure.

Example: During a Fourth of July parade in Downtown Las Vegas, police see a spectator wearing a very skimpy bikini that shows more flesh than fabric. An officer arrests her for indecent exposure. But when prosecutors look over the photographs taken of her and see that the bikini adequately conceals her genitalia and anus, they drop the charges.

Note that full exposure of a person’s private parts is legal in certain licensed strip clubs in Nevada. But people require a work card in order to work lawfully as a stripper.

Nevada courts do not punish people for accidental or unintentional exposure of their private parts.10

Example: Jennifer is riding an escalator when her skirt gets caught. It pulls off her skirt, revealing that she was not wearing underwear. A security guard sees her in the distance and summons a police officer. But when the police officer learns that Jennifer did not intentionally expose herself, he lets her go without arresting her.

Gross misdemeanor convictions of NRS 201.220 violations are sealable two (2) years after the case ends. But felony convictions must always remain on the defendant’s criminal record.11

Note that indecent exposure charges that get dismissed can be sealed as soon as the case ends:12

6. Can I get deported for indecent exposure?

Probably not. Several courts have determined that displaying one’s privates do not qualify as crimes of moral turpitude, which is a deportable class of offenses.13

Still, immigration law is in a constant state of flux, and rules change. Non-U.S. citizens who have been accused of any sex offense should hire a skilled lawyer right away. A lawyer would fight to get the charge dropped or lessened to an offense that poses no risk to the alien’s resident status.

7. How is open or gross lewdness different??

Indecent exposure comprises exposing a person’s privates irrespective of whether the motivation is sexual. In contrast, open or gross lewdness (NRS 201.210) refer to sexual acts, specifically:

Depending on the circumstances of the case, the D.A. may prosecute defendants for committing both indecent exposure as well as open or gross lewdness. An example would be a naked couple having sexual relations in public: The nudity violates NRS 201.220, and the sex act violates NRS 201.210.

Both crimes carry the same penalties.

Urinating or defecating in public is a misdemeanor in Las Vegas. The penalties include:

Typically, police issue a citation instead of placing the suspect under arrest.15

It is a misdemeanor in Clark County to either:

Depending on the extent of the alleged disorderly conduct, police either issue a citation or arrest the suspect.16

Sexual harassment is when someone pesters or bullies someone in a suggestive way. Depending on the case, sexual harassment may be prosecuted as indecent exposure, open or gross lewdness, rape, extortion, breaching the peace, stalking, harassment, assault, battery, peering, coercion, and/or as hate crimes. The penalty turns on the charge.17

If you have been charged with violating NRS 201.220, contact our Las Vegas criminal defense attorneys. We will try to get the charges dropped or reduced to keep the case off your criminal record and to keep you off the sex offender registry.

Arrested in California? Go to our article on Penal Code 314 PC.

Arrested in Colorado? Go to our article on Colorado indecent exposure law.

What are the Penalties for Computer Crimes in Nevada?

Internet crime is a broad category, since there are a variety of crimes that can be committed over the internet. Identity theft and computer hacking are two of the more common internet crimes. The federal computer fraud law that most directly relates to internet crime is the Computer Fraud and Abuse Act (CFAA), (18 U.S.C. 1030). ...

What is the difference between a driver’s license suspension and revocation in Nevada?

The practical difference between a driver’s license suspension and revocation is that reinstating a suspended license is a little easier. This is because people with revoked licenses have to apply for an entirely new license. People with suspended licenses can get their old license back. But both processes require paperwork and a trip to the ...

What is the difference between residential and commercial burglary in Nevada?