Switchblades are generally legal to possess under Nevada state knife laws, but local governments often restrict the length of the blade and where switchblades may be carried. Additionally, it is illegal throughout the state either to:

Penalties for carrying or brandishing a switchblade in an unlawful way depend on the specific offense:

It is also a misdemeanor carrying fines and/or jail time to carry knives in violation of city- or county-wide ordinances.

In this article, our Las Vegas criminal defense attorneys discuss Nevada switchblade laws. Scroll down or click on a topic below to jump to that section: 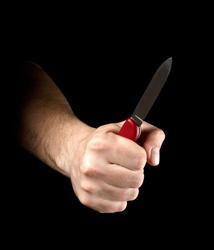 Switchblades are generally legal in Nevada, though they may be illegal to carry in unincorporated Clark County.

1. Definition of switchblade knives in Nevada

Nevada's legal definition of a “switchblade” under NRS 202.265 is a knife with the following two attributes:

2. Open carry of switchblades in Nevada

In addition, Nevada's city and county governments have their own local laws regulating switchblades. For instance, the open carry of switchblades appears to be illegal on sidewalks in unincorporated Clark County.2

Before traveling to a new location, always check the local municipal and county codes in Nevada. Scroll down to sections 5 and 6 for local Las Vegas and Clark County knife laws.

3. Concealed carry of switchblades in Nevada

3.1. Penalties for carrying a switchblade without a CCW permit in Nevada

Carrying a switchblade concealed in Nevada without having a current and valid CCW permit is a category C felony under NRS 202.350. The punishment is:

But it may be possible to get the charge dismissed if the police found the switchblade pursuant to an illegal search in Nevada. If the judge grants the defendant's Nevada motion to suppress the state's evidence due to the illegal search, the D.A. may be left with too weak a case to prosecute.

Remember that it is always illegal to carry switchblades on school property, openly or concealed.

4. Carrying switchblades at schools in Nevada

NRS 202.265 specifically forbids people from taking a switchblade to any of the following three types of locations in Nevada:

However, there is an exception when the knife-carrier gets prior written permission from either:

Note that people who own or operate child care facilities in their homes may possess a switchblade there as long as they live in their home.7

4.1. Penalties for carrying a switchblade knife on school or child care property in Nevada

NRS 202.265 makes carrying a switchblade on school or child care property a gross misdemeanor. The sentence is:

5. Drawing a switchblade in a threatening manner in Nevada

NRS 202.320 makes it a misdemeanor to brandish or exhibit a deadly weapon -- including a switchblade -- in a rude, angry, or threatening manner in front of at least two other people. Penalties include:

Note that defendants may be able to get the charges dropped if they were using the weapon only to defend themselves. Learn more about Nevada self-defense laws.10

The Las Vegas Municipal Code (LVMC) applies to the incorporated city of Las Vegas. It includes downtown but not the Strip.

It makes no difference if the event is on public property, a public street, or a public sidewalk. The maximum punishment is six (6) months in jail and/or $1,000 in fines.11

Local governments have their own knife laws.

The Clark County Code (CCC) applies to the unincorporated areas of Clark County, such as Paradise and Spring Valley. Any CCC violation is a misdemeanor, carrying a maximum of six (6) months in jail and/or $1,000 in fines.

CCC 14.42.056 appears to prohibit the open carry of any knife with a blade longer than three (3) inches on public sidewalks or public pedestrian easements. As discussed directly below, concealed carry of certain knives is allowed with the sheriff's permission.12

CCC 12.04.180 prohibits carrying a concealed knife with a blade at least three (3) inches long without having written permission from the sheriff.

This law is technically redundant since NRS 202.350 already prohibits carrying concealed knives without a permit. Still, anyone considering carrying a switchblade in Clark County should contact the Clark County Sheriff for the most current rules and procedures for acquiring written permission.13

It makes no difference if the event is on public property, a public street, or a public sidewalk.14

8. Deportation for illegally carrying a switchblade

It is unclear whether illegally carrying or brandishing a switchblade is ultimately deportable. Therefore, any non-U.S. citizen who has been charged with violating NRS 202.350, NRS 202.265, or NRS 202.320 is urged to consult an attorney.

The attorney will be able to talk with prosecutors to learn whether the government is pursuing deportation. And if so, the attorney may be able to negotiate a Nevada plea bargain where the charges get dismissed or reduced to non-removal crimes. Learn more about the criminal defense of immigrants in Nevada.

People convicted of a knife offense in Nevada can usually get their criminal records sealed after a predetermined wait time. The length of this waiting period depends on the category of crime the person was convicted of:

Note that there is no waiting period to ask the court for a record seal whenever the criminal charges get dismissed.16 Learn more about how to get a record seal in Nevada.

If you have been charged with a “switchblade crime” in Nevada, phone our Las Vegas Criminal Defense Attorneys at 702-DEFENSE (702-333-3673) for a free phone meeting. We will do everything to try to negotiate and litigate a favorable end result for your case.