No, butterfly knives are generally legal under Nevada knife laws.

However, people who take a butterfly knife with a blade of at least two (2) inches long to a school may face criminal charges if they are also trespassing, loitering, causing a nuisance, or defacing school property.

And any pupils who take any butterfly knife to school face expulsion, even if they cause no other trouble. 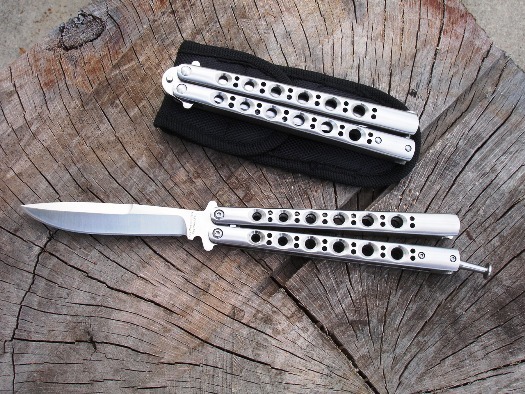 It is generally legal to carry butterfly knives in Nevada.

As its name suggests, a butterfly knife is a folding pocketknife except that the blade is concealed by not one but two handles. When the knife is open, the two handles join to become one large handle.

Other names for butterfly knives are:

Butterfly knives are not considered a switchblade under Nevada law.

It is legal to open carry butterfly knives in Nevada. But as discussed below, they may be prohibited at schools under certain conditions.

Nevada law is unclear about whether it is illegal to carry a butterfly knife concealed.

If a butterfly knife is a dangerous or deadly weapon, carrying one concealed without a CCW permit is a category C felony in Nevada. The penalty is:

NRS 393.410 makes it a gross misdemeanor to do any of the following while in possession of a butterfly knife with a blade of two (2) inches or longer:

The penalty in Nevada is:

In addition, people face prosecution for a “public offense” if they have butterfly knife with a blade of two inches or longer while “willfully and maliciously injuring, marking, or defacing any public schoolhouse, its fixtures, books, or appurtenances.” The punishment depends on how much damage the defendant allegedly caused.

The defendant will be prosecuted for a misdemeanor in Nevada if the property damage totals less than $250. The sentence is:

The defendant will be prosecuted for a gross misdemeanor in Nevada if the property damage totals at least $250 but less than $5,000. The sentence is:

The defendant will be prosecuted for a category C felony in Nevada if the property damage totals at least $5,000 or higher. The sentence is:

And pupils who bring butterfly knives to school face expulsion. It makes no difference what length the blade is or whether the pupil planned to harm anything or anyone. A first offense of bringing a butterfly knife to school carries an expulsion sentence of one year. A second offense carries permanent expulsion.

It is unlawful, within the unincorporated area of Clark County, for any person to carry upon his person a concealed weapon, not permitted in accordance with state law, of any description, including a knife with a blade of three inches or more, capable of being concealed, without first having received written permission therefor from the sheriff.

(c) With the intent to inflict harm upon the person of another, possess or use a nunchaku or trefoil; or

(d) Carry concealed upon his or her person any:

(3) Pistol, revolver or other firearm, other dangerous or deadly weapon or pneumatic gun.

1.  It is unlawful for any person:

(a) Willfully and maliciously to injure, mark or deface any public schoolhouse, its fixtures, books or appurtenances;

(b) To commit any nuisance in any public schoolhouse;

(c) To loiter on or near the school grounds; or

(d) Purposely and maliciously to commit any trespass upon the grounds attached to a public schoolhouse, or any fixtures placed thereon, or any enclosure or sidewalk about the same.

2.  Except as otherwise provided in subsection 3, any person violating any of the provisions of this section is guilty of a public offense, as prescribed in NRS 193.155, proportionate to the value of the property damaged or destroyed and in no event less than a misdemeanor.

3.  Any person who is in possession of a dangerous weapon during his or her commission of a violation of paragraph (b), (c) or (d) of subsection 1 is guilty of a gross misdemeanor.

(a) “Dangerous knife” means a knife having a blade that is 2 inches or more in length when measured from the tip of the knife which is customarily sharpened to the unsharpened extension of the blade which forms the hinge connecting the blade to the handle.

NRS 392.466  Suspension or expulsion of pupil for battery on employee of school, possession of firearm or dangerous weapon, sale or distribution of controlled substance or status as habitual disciplinary problem; modification to suspension or expulsion requirement; limitations for pupils with disabilities.
…
2.  Except as otherwise provided in this section, any pupil who is found in possession of a firearm or a dangerous weapon while on the premises of any public school, at an activity sponsored by a public school or on any school bus must, for the first occurrence, be expelled from the school for a period of not less than 1 year, although the pupil may be placed in another kind of school for a period not to exceed the period of the expulsion. For a second occurrence, the pupil must be permanently expelled from the school and:

(a) Enroll in a private school pursuant to chapter 394 of NRS, become an opt-in child or be homeschooled; or

(b) Enroll in a program of independent study provided pursuant to NRS 389.155 for pupils who have been suspended or expelled from public school or a program of distance education provided pursuant to NRS 388.820 to 388.874, inclusive, if the pupil qualifies for enrollment and is accepted for enrollment in accordance with the requirements of the applicable program.
…
9.  As used in this section:

(b) “Dangerous weapon” includes, without limitation, a blackjack, slungshot, billy, sand-club, sandbag, metal knuckles, dirk or dagger, a nunchaku or trefoil, as defined in NRS 202.350, a butterfly knife or any other knife described in NRS 202.350, a switchblade knife as defined in NRS 202.265, or any other object which is used, or threatened to be used, in such a manner and under such circumstances as to pose a threat of, or cause, bodily injury to a person.