Nevada law allows people to carry knives in public, but with four main exceptions. First, a permit is required for concealed carry of certain knives. Second, Clark County requires the sheriff’s permission to conceal carry a knife with a three-inch or longer blade. Third, having knives is prohibited at schools or child care facilities. Fourth, it is illegal to brandish knives in front of two or more people.

The punishment for violating Nevada knife laws depends on the specific charge:

The defense attorney may be able to persuade the D.A. to dismiss the charge or plea bargain it down.

Depending on the specific charges, common defenses to Nevada knife crimes include:

As long as the D.A. has insufficient evidence to prove guilt beyond a reasonable doubt, the criminal charges should be dropped.

Carrying a concealed machete without a proper CCW permit is a crime in Nevada.

1. Do I need a CCW permit for knives in Nevada?

Nevada law requires people to have a CCW permit in order to carry concealed machetes or other dangerous or deadly weapons.1

NRS 202.350 does not define which types of knives other than machetes qualify as “dangerous or deadly.”2 However, NRS 202.265 and NRS 202.320 indicate that dangerous and deadly weapons may include:

A knife is considered concealed if it is carried in a way meant to go unnoticed. Examples include carrying a knife:

For more information see our article on carrying concealed knives.

Note that Clark County law requires people to have a CCW permit in order to carry concealed any type of knife with a blade of three (3) inches or longer.4 For more information, contact the Las Vegas Metropolitan Police Department at 702-828-3111.

Note that Nevada does not have statewide preemption for knife laws. Local governments can make their own, harsher laws.

People who wish to carry any concealed knife is encouraged to contact an attorney to help determine whether a CCW permit is necessary for their type of knife. The person can also contact the local sheriff‘s office for guidance.

Here is a list of links to Nevada sheriff’s offices.

2. Can I carry knives openly?

It depends on the location. Nevada has no state-wide laws prohibiting the open carry of knives in Nevada. But as discussed in the following question, it is unlawful to carry certain knives on school property and at child care facilities. And certain local municipal codes put restrictions on what kind of knives you can carry and where, so check your local laws.

Nevada law prohibits the open or concealed possession of dirks, daggers, or switchblades in the following children-populated locations:

Exceptions to this rule include security guards, law enforcement officers, peace officers, and other people given written permission to carry the weapon on the premises. And people who run child care facilities in their own homes may have their knives on the premises; however, they should be careful to keep the children away from them or else they could face charges of reckless endangerment (NRS 202.595) or worse.5

For more information see our article on possessing weapons at schools or childcare facilities (NRS 202.265).

4. Can I brandish knives?

It is illegal in Nevada to draw or brandish deadly knives in a rude, angry, or threatening manner in the presence of two (2) or more people. NRS 202.320 specifies “deadly” weapons to include:

Note that brandishing a knife is an entirely different offense from assault with a deadly weapon (NRS 200.471(2)(b) (ADW). ADW is putting another person in anticipation of immediate bodily harm with a knife or other deadly weapon.

Furthermore, ADW can be committed with only one person present, whereas brandishing a knife requires at least two people present. ADW carries much harsher penalties than drawing a knife threateningly.7

For more information see our article on drawing a knife in a threatening way (NRS 202.320).

5. Are any knives illegal?

No knives are illegal to possess in Nevada. State law used to have restrictions on switchblades, but that statute was recently repealed. For more information, see our article on switchblade knife laws. Other names for this include automatic knives, the spring-blade knife, and the snap-blade knife.

Examples of legal knives include:

Note that Nevada law does prohibit people from possessing trefoils in the following circumstances: 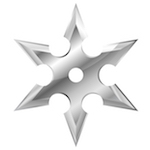 Trefoils are illegal to bring to school in Nevada.

Trefoils are not really considered knives, but they do have at least three sharp edges. And like knives, trefoils may be thrown. Trefoils also go by the names throwing stars or ninja stars.8

The punishment for wrongfully carrying or brandishing a knife depends on the specific offense:

6.1. Carrying a concealed knife without a CCW permit

A first offense is a gross misdemeanor:

6.3. Possessing or using a trefoil with intent to cause harm

A first offense is a gross misdemeanor:

6.4. Possessing a knife at school

Depending on the case, the D.A. may be willing to dismiss or reduce the charges to lesser offenses.  And judges may elect to impose probation in lieu of incarceration.

7. What are common defenses?

The best way to fight charges of Nevada knives crimes always depends on the specifics of the individual case. Possible defenses to violations of Nevada state knife laws are the following:

7.1. The weapon is not concealed

Nevada law requires CCW permits for dangerous knives only when the person is wearing them in a concealed manner.14 Maybe the police incorrectly believed the knife was hidden when in fact the defendant was openly carrying it. Common evidence that may show that a defendant’s knife was visible includes:

As long as the prosecutor cannot prove beyond a reasonable doubt that the knife was concealed from plain view, criminal charges for carrying a concealed knife should not stand.

7.2. The blade is less than three inches long

Clark County law prohibits concealed carry of knives that are three (3) inches in length or longer.15 If people arrested for this offense can show that the police were mistaken about the blade being too long, then the charge should be dropped. An accurate ruler that measures down to the micrometer would be helpful evidence.

7.3. The weapon is not illegal at schools

Nevada law specifically prohibits only dirks, daggers, or switchblades from school, public university or child care property.16 If the defense attorney can show that the knife in question does not fall under the definition of dirk, dagger, or switchblade, the NRS 202.265 charges should be dismissed. Testimony from a weapons expert would be helpful evidence.

7.4 The defendant brandished the weapon in self-defense

Nevada law permits people to brandish knives in a rude, angry or threatening manner as long as it is done in self-defense.17

Example: Bill and Fred get into an argument in Fred’s living room during a party. Bill starts punching Fred. Fred retaliates by pulling off the sword he keeps on his mantle and waving it at Bill. Even though Fred clearly drew the sword in a threatening manner in front of two or more people, Fred should not face NRS 202.320 charges because he was acting in self-defense.

Had Bill in the above example not punched Fred but merely yelled at him, Fred would probably not be justified in waving the sword at Bill. Self-defense is a valid defense only when the defendant did not make the first move, and the defendant uses proportional force.18

8. Can the record be sealed?

Yes, though the waiting period to apply for a seal depends on the specific offense:

Illegally carrying or brandishing a knife is usually not deportable. However, it is never a sure thing how immigration judges will rule.

Any non-citizens charged with criminal offenses are advised to hire an attorney as quickly as possible. Perhaps the D.A. will be willing to dismiss the charges or at least change them to offenses that are unquestionably non-deportable.

10. What are knife-related crimes?

10.1. Using a deadly weapon in the commission of a crime

When a person uses or possesses a deadly weapon while executing a crime, the judge will increase the sentence by one to twenty (1 – 20) years. However, this added sentence may not be longer than the underlying sentence.

So for example, if a defendant is sentenced to 8 years behind bars for armed robbery (NRS 200.380), the extra sentence can be no longer than 8 years for a total sentence of 16 years.21

Battery (NRS 200.481) is an unlawful use of physical force on another person. Common examples include stabbing, hitting, kicking, slapping, spitting on, and poisoning.

Battery can be a felony or a misdemeanor depending on whether the situation involved weapons, strangulation, or substantial bodily harm.22

Assault (NRS 200.471) is like an attempted battery. Assault is putting someone else in the apprehension of being immediately physically harmed. A common example is holding a knife in front of someone’s neck as if the person is about to be struck.

Assault can be a felony or a misdemeanor depending on whether weapons are involved and whether the victim is a police officer (or other “protected class”).23

Also see our related article, Are butterfly knives legal in the state of Nevada?

5 steps for getting married in Las Vegas, Nevada

Does NRS 200.200 allow me to kill someone in self defense in Nevada?

What is a Nevada Sentencing Hearing?

Illegal Fireworks Abound in Nevada on Fourth of July