Brought a gun or knife to school in Nevada? 3 Defenses

NRS 202.265 is the Nevada law that prohibits having knives, guns, or other weapons at Nevada schools or childcare facilities.1 Penalties include up to 364 days in jail and/or $2,000 in fines.2 The statute indicates that:

(a) An explosive or incendiary device;

(b) A dirk, dagger or switchblade knife;

(c) A nunchaku or trefoil;

(d) A blackjack or billy club or metal knuckles;

(f) A pistol, revolver or other firearm; or

(g) Any device used to mark any part of a person with paint or any other substance.

2.  Any person who violates subsection 1 is guilty of a gross misdemeanor.

But a skilled Nevada criminal defense lawyer may be able to get the charge reduced or dismissed. Continue reading to learn the law, defenses and punishments. 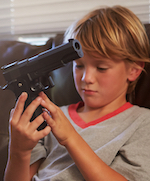 It is a gross misdemeanor to bring weapons to Nevada school or child care facilities under NRS 202.265.

Is it illegal to have weapons at schools in Nevada?

Schools and childcare facilities are meant to be safe havens for youngsters. Therefore Nevada law prohibits people from possessing or carrying dangerous weapons at the following locations:

Schools and childcare facilities are weapons-free zones in Nevada.

The types of weapons banned from these school and childcare facilities include:

Any dangerous or deadly weapon is prohibited on school property in Nevada.

Note that NRS 202.265 applies not only to school and childcare structures but also to their grounds.5

Example: Max takes a walk through UNLV’s campus while carrying his rifle.  A cop with the Las Vegas Metropolitan Police Department spots the gun. He then immediately arrests Max and books him at Clark County Detention Center.  He is charged and ultimately convicted of carrying a weapon at a school.

It makes no difference in the above example that Max never entered any buildings at UNLV.  Nor does it matter he had no intention of using the gun.  Merely being on Nevada state university property while carrying a gun makes him criminally liable.

The defense attorney’s job is to try to keep the prosecution from proving guilt beyond a reasonable doubt.

There are various ways to fight charges of violating NRS 202.265 in Nevada.  The following are three of the more common strategies:

The U.S. Constitution protects against unreasonable searches and seizures.

If the case in the above example goes to trial, the suspect’s defense attorney would file a motion to suppress the knife as evidence.  The attorney would argue that the police performed an illegal search by searching the suspect’s house without a warrant.  If the judge agrees and excludes the knife as evidence, the prosecution might dismiss the charges for lack of proof.  Learn more about search and seizure laws

Note that the U.S. Constitution’s Second Amendment protects Americans’ right to bear arms is not a defense to Nevada weapons crimes.  Nor is it a defense that the defendant has a permit to carry concealed weapons.  See our article on concealed carry laws (NRS 202.350).

Possessing or carrying a weapon on school property is a gross misdemeanor in Nevada.  The sentence includes:

A defense attorney may be able to get the judge to impose fines and/or probation instead of jail.

If you have been accused of “possessing or carrying a weapon at a school or childcare facility” in Nevada, contact our Las Vegas Criminal Defense Attorneys for a meeting. We may be able to get the charge lessened to a minor offense or dismissed.

In California? See our article on the Gun-Free School Zone Act.