NRS 199.120 is the Nevada law that prohibits perjury in Nevada, which is lying under oath. Subornation of perjury -- which is inducing another person to commit perjury -- is also illegal. The statute states:

A person, having taken a lawful oath or made affirmation in a judicial proceeding or in any other matter where, by law, an oath or affirmation is required and no other penalty is prescribed, who:

1.  Willfully makes an unqualified statement of that which the person does not know to be true;

2.  Swears or affirms willfully and falsely in a matter material to the issue or point in question;

3.  Suborns any other person to make such an unqualified statement or to swear or affirm in such a manner;

4.  Executes an affidavit pursuant to NRS 15.010 which contains a false statement, or suborns any other person to do so; or

5.  Executes an affidavit or other instrument which contains a false statement before a person authorized to administer oaths or suborns any other person to do so,

--> is guilty of perjury or subornation of perjury, as the case may be, which is a category D felony and shall be punished as provided in NRS 193.130.

This page contains a legal summary of the Nevada offense of perjury under NRS 199.120. Keep scrolling down to learn the definition, how to fight perjury charges, and potential penalties.

Legal Definition of Perjury in Nevada under NRS 199.120

Simply put, perjury is lying under oath. The legal definition of "perjury" in Las Vegas, Nevada is when a person takes an oath in a judicial or other proceeding where an oath is legally required and the person either: 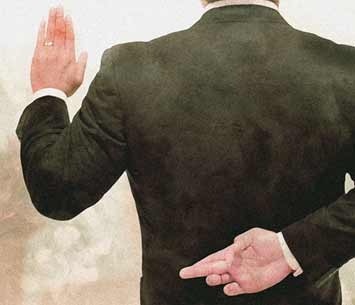 Subornation of perjury is criminal in Nevada under NRS 199.120 even if no perjury occurs.

A person who makes a false statement under oath is not guilty of perjury in Nevada if he/she believed the statement to be true.

Another type of perjury in Nevada occurs when a person makes a declaration under penalty of perjury (or induces someone else to do so) when the declaration contains either:

It's also a crime under federal law to lie under oath. For more information, read our article on federal perjury law. Federal crime of perjury

There are many possible defenses available to fight Las Vegas perjury charges under NRS 199.120. Some defenses are purely procedural, such as that the defendant never really took an oath or that an oath was never required. But the most commonly tapped defense is that the defendant had no intent to lie...or that he honestly believed he was telling the truth.

In Nevada criminal cases, the prosecution has the burden to prove a defendant's guilt beyond a reasonable doubt in order to obtain a conviction. If the defense attorney can raise this reasonable doubt by showing that the evidence suggests the defendant didn't deliberately lie under oath, then the case may be thrown out.

A violation of Las Vegas perjury law is punished as a category D felony in Nevada. The typical sentence in a Clark County court carries:

Just merely attempting to suborn, induce or bribe someone else to commit perjury is a gross misdemeanor in Nevada even if no perjury ever gets committed. The penalty includes:

Finally, a person who willfully commits (or induces someone to commit) perjury that results in the conviction and execution of an innocent person can be prosecuted as the Nevada crime of murder (NRS 202.030). This is a category A felony in Las Vegas carrying:

Note that a judge may also punish someone for committing perjury by holding them in contempt of court. Also note there is no civil cause of action for perjury . . . in other words, perjury is a crime but not a tort.

Violating federal perjury law carries a fine and/or up to five years in prison. A person convicted of perjury in both Nevada state and federal courts would then do the time for both sentences one after the other

If you've been accused of perjury under NRS 199.120, Las Vegas criminal defense attorneys at 702-DEFENSE (702-333-3673) can meet with you for a free meeting. They will try either to get your case dismissed, to get your charged reduced to a lesser offense, or else to take your case to a jury and fight for your innocence at trial.