Nevada law prohibits jaywalking, which is when a pedestrian crosses a street outside of a marked crosswalk. Police typically issue citations for jaywalking that are similar to traffic tickets.

Jaywalking is a misdemeanor that carries a fine. In the City of Las Vegas, the fine is $160.

All defendants are encouraged to retain counsel to try to get the fine lowered and the charge possibly dismissed so their criminal record stays clean.

Potential defenses to NRS 484B.287 charges include demonstrating that:

As long as the prosecutor has insufficient evidence to prove guilt beyond a reasonable doubt, the charge should be dropped. 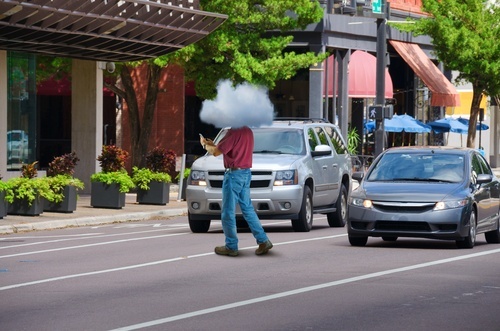 Crossing the street outside of a marked crosswalk in Nevada carries a fine penalty.

1. What is jaywalking, and is it illegal in Nevada?

The legal definition of jaywalking in Nevada is crossing the street outside of a marked crosswalk or otherwise crossing the road illegally. Jaywalking is illegal in Nevada.1

In Las Vegas, jaywalking tends to be more rigorously enforced on the Strip and Downtown because of the heavy traffic. Police typically issue citations for jaywalking. But alleged jaywalkers may get arrested in the following circumstances:

Many intersections now have cameras mounted on the traffic lights, so there may be photographic evidence of people's alleged jaywalking.

2. What are the penalties for jaywalking in Nevada?

Violating NRS 484B.287 is a misdemeanor in Nevada.

Because jaywalking is such a minor offense, it may actually serve as an ideal plea bargain if the defendant is facing more serious charges. Sometimes the D.A. may be willing to lower charges of shoplifting or trespass down to jaywalking.

A jaywalking conviction does not cause the person's driver's license to be revoked by way of demerit points.

3. What are the defenses to Nevada jaywalking charges?

Most people who are cited for jaywalking in Nevada choose to pay the fine without disputing the charge. But there are various defenses to explore if the defendant wishes to fight the case: 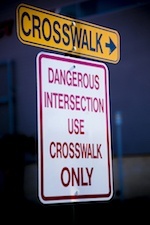 Typical evidence might include eyewitnesses, surveillance video, or even photographs of the road that indicate the crosswalks were not clearly marked.

4. Can I seal my Nevada jaywalking case?

Usually, yes. A jaywalking conviction may be sealed one (1) year after the case ends.4 And if the case gets dismissed (meaning that there was no conviction), then there is no waiting period to begin the Nevada record seal process.5

5. Can I be deported for jaywalking?

No. As a low level misdemeanor, jaywalking is not a deportable crime in Nevada.

However, illegal aliens who get caught jaywalking are vulnerable to being arrested, turned over to ICE, and deported. It makes no difference if the charge is ultimately dismissed. Learn more about the criminal defense of immigrants in Nevada.

Not using a crosswalk can potentially lead to accidents and injuries.

Most jaywalking incidents in Nevada are harmless, but in serious situations alleged jaywalkers may face charges of "reckless endangerment" or even "involuntary manslaughter."

The Nevada crime of reckless endangerment is when someone acts in willful or wanton disregard of the safety of other people or property. So if a police officer believes that the defendant was deliberately jaywalking in a careless way that could hurt someone else, he/she may face a reckless endangerment arrest.

If no death or substantial bodily harm results from an alleged act of reckless endangerment, the charge is a gross misdemeanor, carrying:

Otherwise, it is charged as a category C felony, carrying:

In Nevada, involuntary manslaughter is charged as a category D felony.  The punishment includes: 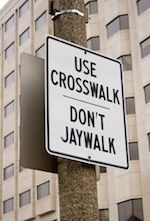 People who cause accidents by not using crosswalks face personal injury lawsuits.

People who have been injured in an accident allegedly caused by jaywalking may sue the alleged jaywalker under the legal doctrine of negligence per se. A defendant can be found liable under negligence per se if:

Depending on the case, a good Las Vegas car accident attorney can recover compensatory damages to cover the victim's:

Even plaintiffs who were partially at fault could still be entitled to a large financial reward under Nevada's comparative negligence laws.6 Learn more about our Las Vegas personal injury attorneys.

If you have been cited for jaywalking or are facing criminal charges for any other offense in Nevada, please call our Las Vegas criminal defense lawyers at 702-DEFENSE (702-333-3673) for a free phone meeting.  We may be able to lower your fine or get your case dismissed completely.

• Will I get deported for “jaywalking” in Nevada?


• Can I seal my “jaywalking” case from my criminal records in Nevada?


• Can I keep my guns if I am convicted of “jaywalking” in Nevada?


• Is it possible to win at trial for “jaywalking” in Nevada?


Can charges for “jaywalking” be dismissed through negotiation in Nevada?


Why would I plea to “jaywalking” in Nevada when I am innocent?