How do I post bail in Las Vegas, Nevada?

Nevada bail hearings are where a judge decides whether to release people following their arrest while their criminal case is pending. Judges are more likely to grant a bail release – or even an own recognizance release with no bail at all – to people who pose no flight- or safety risks.

1. What happens at bail hearings in Las Vegas, Nevada?

Bail hearings are where judges in a criminal case determine whether you can be released on bail after being arrested for a criminal offense.

During the hearing, your Las Vegas criminal defense lawyer tries to persuade the judge that you are not a flight risk or a public safety threat. Meanwhile, the deputy district attorney may try to argue that a high bail is necessary to ensure that you will appear at all future court dates.

After your defense attorney and prosecutors argue their sides, the criminal court judge may rule in one of five ways:

Bail hearings are also where the judge determines what rules you have to follow while out on bail or on your own recognizance. For example, some defendants are required to surrender their guns, avoid contact with the victim, and get permission ahead of time before they travel for as long as their criminal case is open.

Note that you are not required to speak to the judge, and your Las Vegas bail hearing attorneys can do all the talking on your behalf.  It is also typical for your attorneys to have a Nevada bail bondsman present at the hearing to expedite the bailout process (if the judge grants your release).1 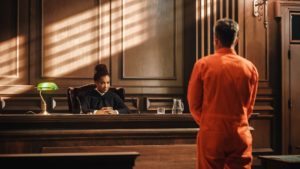 Bail hearings are often held alongside the arraignment.

2. When do bail hearings occur?

Usually your Nevada criminal defense attorney will request a bail hearing as soon as possible after your arrest in the hopes of getting you released quickly. In many cases, the judge will agree to hold a spontaneous bail hearing right after the arraignment/72-hour hearing.

Las Vegas judges hold bail hearings in their courtrooms. But sometimes the hearings are held over video conference so inmates do not have to be transferred to court from the Clark County Detention Center or Las Vegas City Jail.

4. How do I win bail hearings?

Your Las Vegas bail hearing lawyer‘s goal is to show the judge that you are not a danger to the community and are not going to become a fugitive.

In order to demonstrate that you pose no danger to anyone, your attorney would present evidence that you:

In order to show that you would never flee the country, your attorney would argue that you:

Las Vegas bail hearing attorneys may also call witnesses such as your employers, colleagues, family, friends, landlords, religious teachers or counselors to vouch for your character. 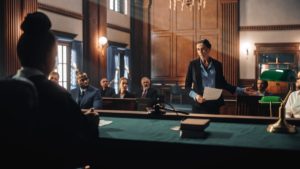 Bail hearings can range from a few minutes to several hours depending on the case.

5. What happens to my bail money?

If you post bail and appear at all future required court hearings, the bail money will be returned to you at the end of the case – even if you get convicted.

Were you or a loved one arrested by law enforcement? Contact our Nevada law firm for legal advice. Our criminal law office will guide you through the bail process in pursuit of an O.R. release or bail reduction.

Our Las Vegas bail hearing lawyers defend against all types of criminal charges from driving under the influence (DUI) to domestic violence and sex crimes.  And our Las Vegas, NV criminal defense lawyers appear in courts throughout Clark County (including Henderson and North Las Vegas) and the state of Nevada.