In this article, our Las Vegas personal injury attorneys provide a guide to Nevada bike laws:

Injured in a bicycling accident in Las Vegas? See our article on how to file a bike accident lawsuit in Nevada.

Although bicycles are not “vehicles” under Nevada law because they are propelled by human power,1 cyclists are required to follow most of the same traffic rules of the road as automobile drivers to maximize bicycle safety.

And just like automobile drivers, cyclists can be cited with a ticket for traffic violations such as failing to stop at a red light or stop sign.

Note that if a bicyclist is at a red light – and the traffic light goes for two cycles without detecting their presence – then the bicyclist can go through the intersection when it is safe.2

Nevada state law does not require that bicycle riders wear helmets, although helmets are required for motorcyclists. That said, the Nevada Department of Transportation and the National Highway Traffic Safety Administration (NHTSA) both strongly encourage bikers to wear helmets. The recent Assembly Bill 187 that would have required helmets for children on bikes has stalled in the legislature.

See our related article, Do you have to wear a helmet when riding a bicycle in Nevada? Also learn more about Nevada motorcycle helmet laws (NRS 486.231).

Yes. Nevada cyclists must keep one hand on the handlebar at all times. Cyclists are advised to wear backpacks or fanny packs to carry their belongings so both their hands remain free.3

4. Must bicyclists ride on the far right side of the road?

Yes. Cyclists in Nevada should travel as far right on the road as possible unless:

When cyclists are on a single-lane road, automobile drivers may pass on the left as long as they keep at least three feet of space between them.

When cyclists are on a multi-lane road, automobile drivers should travel on one of the left lanes so that the cyclists can have the right lane to themselves.

Note that no more than two cyclists may ride next to each other at a time in a travel lane.4

The safest bet is for cyclists to ride on a designated bike lane (if there is one) rather than a travel lane. But biking on the shoulder is discouraged since shoulders are usually rougher are are littered.

5. Are bikers allowed to ride on the sidewalk?

Although Nevada state law does not prohibit biking on sidewalks, many local ordinances do:

For instance, biking on sidewalks is illegal in Las Vegas on Fremont Street between Main Street and Seventh Street.5 And Las Vegas police may cite people for sidewalk-riding on the Strip (though there seems to be no Clark County ordinance prohibiting it).

Always check local laws before taking a bike on the sidewalk. And cyclists should dismount before going over a pedestrian crosswalk.

7. Must cyclists ride in the same direction as vehicles?

Yes. Cyclists are prohibited from riding against traffic flow in Nevada. It is far safer to ride with traffic than against the flow.7 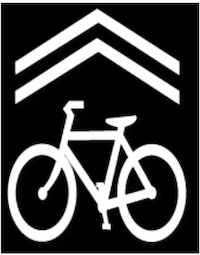 8. What about shared lanes?

Both bikes and vehicles in Nevada are allowed to ride on a shared lane, often called a “sharrow.” Sharrows are indicated by a bicycle symbol beneath two chevron markings.

9. Are there special rules for cycling at night?

Yes. Bikers who ride at night in Nevada must have their bike equipped with all of the following:

Note that a red rear reflector is mandatory even if the bike also has a taillight. Also, note that the above requirements apply to biking in daylight with poor visibility.8

10. When must bikes allow vehicles to pass?

Bikers in Nevada are required to move off the roadway (if safe to do so) when there are at least five (5) vehicles behind them.9

Yes. Bikers in Nevada are required to use hand signals before turning unless either: 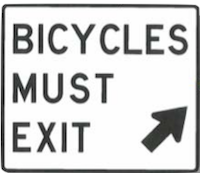 12. Are there special rules for highways and restricted areas?

Some Nevada highways are open to bikers, and others are not. Highways that are off-limit to cyclists will have signs warning bikers to exit.

In rural Nevada, biking is typically allowed on highways since there are no other available roadways.

13. How common are biking accidents?

Though bicycles account for a small portion of total traffic in the United States, collisions between cars and bikes are all too common. Many drivers are distracted or unaware of the presence of cyclists on roadways, creating hazardous riding conditions for cyclists.

According to the National Highway Traffic Safety Administration, about 49,000 cyclists in the United States were injured in collisions with motor vehicles in 2019. Tragically, 846 cyclists were killed in accidents involving motor vehicles during the same period. In Nevada alone, there were 304 traffic fatalities in 2019. Of those 304 deaths, eight were cyclists.

Cars are required to share the road with bicycles. But the reality for cyclists is that many drivers are either unaware of — or hostile to — the presence of bicycles.13

14. Are there special rules for mopeds in Nevada?

Yes. There are four special regulations for mopeds in Nevada:

Otherwise, drivers must operate mopeds as they would bikes (such as driving on the extreme right). Learn more at the Nevada DMV Moped information page. Also see our article on Nevada motorized bicycle laws.

15. Is cycling under the influence a crime in Nevada?

Technically, biking drunk or high is not a DUI offense in Nevada. Driving an automobile, a motorcycle, or even a moped while impaired violates Nevada DUI laws, but biking while impaired is an entirely separate crime.

People who bike while intoxicated on alcohol or drugs face charges for reckless endangerment (NRS 202.595). This is typically prosecuted as a gross misdemeanor, carrying a penalty of:

But if the CUI results in a victim sustaining substantial bodily harm (NRS 0.060), reckless endangerment becomes a category C felony. The sentence is:

Because CUI is not treated as a DUI, cyclists convicted of cycling while impaired will not have their driver’s licenses suspended. Learn more about Nevada cycling under the influence laws.15

Arrested for cycling under the influence in Nevada? Contact our Las Vegas criminal defense attorneys/DUI lawyers for a consultation on how we may be able to get your charge reduced or dismissed.

In California? See our article on Vehicle Code 21200 VC.