What is "Peering" in Nevada? 3 Ways to Fight the Charges

NRS 200.603 is the Nevada statute that defines the crime of peering. Also referred to as a peeping Tom law, this section makes it a crime to go onto another person’s property with the intent to spy through a home’s window, door, or other openings.

Peering is generally a misdemeanor in Nevada, carrying:

But penalties increase if the defendant had a camera or a deadly weapon at the time of the alleged spying. However, it may be possible to get peeping charges reduced or completely dismissed pursuant to a plea bargain. Common defenses to NRS 200.603 allegations are: 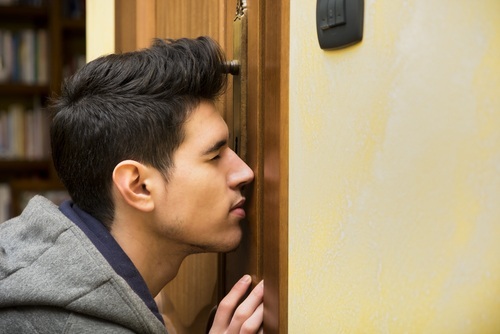 Being a Peeping Tom is usually prosecuted as a misdemeanor under NRS 200.603.

Nevada law defines peering as intentionally going to another’s home and spying through a window or other aperture. In short, Nevada prohibits being a “Peeping Tom.”

There is no requirement that the peeping victim own, lease, or reside on the property. And a person can be convicted of peeping even if it turns out no one is home when the alleged peeper goes on the property.1

Example: Bart waits until it is dark to sneak into his pretty neighbor’s backyard so he can look into her bedroom window. When Bart looks into the window, there is no one there. Before Bart can leave the property, a patrolling police officer spots Bart and arrests him for peering.

It does not matter in the above example that Bart did not end up seeing anything. The D.A. can prosecute as long as Bart had the intention to spy.

Note that Bart would not be guilty of peering if he formulated the intent to spy after he entered his neighbor’s land. Peeping charges apply only if the suspect entered the premises with the intent to spy.

Example: Bart’s dog escapes into his neighbor’s backyard. Bart goes into the backyard to retrieve the dog. While there, he notices his neighbor’s bedroom light is on. He then hides in the bushes and peeks into her window.

In the above example, Bart did not form the intention to spy until after he was on the neighbor’s property. Therefore, he did not violate NRS 200.603. Arguably, he could still be prosecuted for other offenses such as trespass or stalking.

The punishment for violating NRS 200.603 turns on whether the defendant had a deadly weapon — such as a gun or knife — or a recording device:

Note that the D.A. may be willing to lessen peeping charges or drop them completely through negotiating a plea bargain.

The best “Peeping Tom” defenses turn on the specific circumstances of each individual case. Common defense strategies include:

Note that it is not a defense to peering charges that no one else was on the property, or that the defendant did not see anyone else while spying.

Occasionally people levy false allegations against others out of anger or revenge or a simple mistake. If a defendant may have been falsely accused, the defense attorney would thoroughly investigate in an effort to find:

If the D.A. sees that the accuser is not trustworthy, the case may be dismissed.

3.2. The defendant had no intent to spy

Innocent people may get wrongfully arrested for peering merely because they were in the wrong place at the wrong time. Happening to catch someone through an open window by chance is no crime as long as the person had no intent to spy when he/she entered the property.3

Prosecutors have the burden to prove guilt beyond a reasonable doubt. If the defense attorney can show that there is insufficient evidence that the defendant intended to peep, NRS 200.603 charges should not stand.

3.3. The property belonged to the defendant

Peeping charges come into play only when the defendant entered another person’s property.4 If the defendant owed or lived at the home at the time of the alleged spying, then the D.A. should not press peering charges.

Peering convictions can usually be sealed from a defendant’s criminal record after a predetermined waiting period. The length of the wait depends on the category of crime the defendant was convicted of:

Peering with a deadly weapon could be deportable.

Any immigrants and aliens who have been arrested in Nevada should consult with an experienced lawyer. The attorney may be able to get the charges dismissed or at least reduced to non-removable offenses.

6.1. Capturing image of private area of another person

Capturing the image of another’s private area (NRS 200.604) occurs when a person intentionally photographs or takes video of another person’s private parts when the victim has a reasonable expectation of privacy. “Private parts” comprise:

It makes no difference if the private parts are naked or clad with an undergarment.

A first offense is a gross misdemeanor, carrying up to 364 days in jail and/or up to $2,000 in fines. A subsequent offense is a category E felony, carrying probation and a suspended sentence, with a possible jail sentence of up to 1 year. (But if the defendant has two or more prior felony convictions, the court may order one to four years of Nevada State Prison and a maximum of $5,000 in fines.)8

Stalking (NRS 200.575) occurs when someone willfully acts in a way that causes another person to reasonably feel frightened or intimidated. It makes no difference if the stalker had no intention of frightening or intimidating the victim.

A first offense of stalking if the victim is at least 16 is typically a misdemeanor carrying up to six (6) months in jail and/or up to $1,000 in fines. But a subsequent offense if the victim is at least 16 is a gross misdemeanor carrying up to 364 days in jail and/or $2,000 in fines. And aggravated stalking — which is stalking that involves threatening the victim with death or substantial bodily harm (NRS 0.606) — is a category B felony carrying:

Trespass (NRS 207.200) is defined as going on — or refusing to leave — another person’s property without that person’s permission. Many Las Vegas trespass cases involve intoxicated casino patrons who allegedly refuse hotel security’s requests to exit the premises.

Trespass is a misdemeanor carrying up to six (6) months in jail and/or up to $1,000 in fines.10 If the incident happened at a casino, the casino may ban the person from returning.

Call our Las Vegas criminal defense attorneys for help with your case.

Arrested in California? See our article on Penal Code 647(i) and (j) PC.