Out-of-state visitors who pick up a DUI in Nevada face the same penalties as Nevada residents do, including a driver’s license revocation. Because of the Interstate Compact among state DMV offices, a Nevada DUI case usually results in out-of-state motorists having their licenses revoked in their home states.

One piece of good news is that you generally do not have to come back to Nevada to attend the court proceedings. Nevada attorneys may appear in court for out-of-state DUI defendants in misdemeanor DUI cases.

Nevada attorneys can try to negotiate a DUI reduction to reckless driving or dismissal without the defendant ever having to appear before a judge. And the typical penalties for a first-time DUI case can all be completed in the defendant’s home state:

Our Las Vegas DUI attorneys represent many non-Nevada residents who find themselves accused of driving under the influence of alcohol or drugs. In each case, our goal is to try to:

Scroll down for answers to the following frequently-asked-questions: 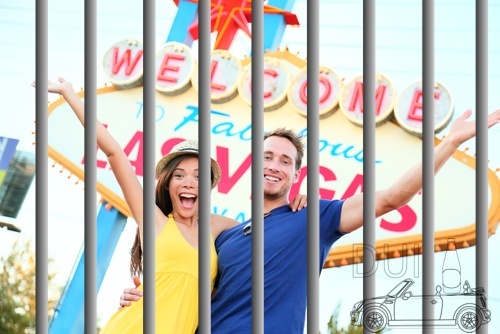 Non-Nevadans arrested for DUI in Las Vegas usually do NOT have to return to Nevada for court once they hire a local attorney.

1. Do I have to come back to Las Vegas for court?

In most cases, no, as long as the defendant has a local Nevada attorney representing him/her.

Defendants facing felony DUI charges might also be able to avoid going to court as long as they have an attorney appearing for them. But it depends on the circumstances of the case and the individual judge. Felony DUI cases include all third-time DUIs and DUIs causing injury or death.2

Once an out-of-state defendant retains a local Nevada attorney, the attorney may:

If the defense and prosecution reach a plea bargain, the defendant can usually execute all paperwork through the mail. The only time during the DUI court process that a defendant must come into Nevada for court is if the case goes to trial. The vast majority of cases resolve without a trial.

Hiring an attorney is not legally required, but defendants who forgo private counsel face three disadvantages:

Otherwise, defendants have the option to represent themselves without an attorney. Or they can ask the court to appoint a public defender (if they qualify financially). But public defenders lack the time and resources that private attorneys have to thoroughly investigate a case and craft the best defense possible.

3. What happens if I ignore my case?

The only way to get rid of (“quash”) an outstanding bench warrant is to request a court hearing to persuade the judge to recall the warrant. In misdemeanor DUI cases, a defendant with a bench warrant usually does not have to appear at this court hearing as long as his/her attorney appears.3

Yes, though police are likely to seek out and extradite only defendants facing felony DUI charges. Fugitives facing only misdemeanor DUIs are less likely to be hunted down by out-of-state police. But it can happen.4

Extradition is an extremely complicated process that involves a governor’s warrant and collaboration between different states’ police agencies and district attorney’s offices. Learn more about how extradition to Nevada works.

4. Do I have to come back to Las Vegas to hire an attorney?

No. Las Vegas Defense Group’s DUI attorneys conduct free phone consultations with individuals who were arrested here on drunk driving charges. We can discuss the specifics of the case and advise about possible defenses and the best way to proceed, all over the phone.

When defendants decide to hire our firm to represent them, we will email them a retainer agreement that can be signed and returned online. Our Nevada DUI lawyers then handle the entire case from there.

Our clients can always view the police reports, lab reports and other documentation in the case through our online client portal. We then set phone meetings to discuss the reports together and plan case strategies.

5. What will happen to my out-of-state driver’s license?

The defendant’s home state will probably impose the same penalty that it would if the defendant got arrested for DUI in the home state. Most states levy some kind of driver’s license revocation or suspension for a DUI.5

Certainly, Nevada lacks jurisdiction to suspend or revoke driver’s licenses issued by other states. So all the Nevada DMV can do to out-of-state DUI defendants is suspend their driving privileges in the state of Nevada. But the Nevada DMV will also inform the defendant’s home state DMV of what happened.

The Nevada DMV abides by the Interstate Driver’s License Compact, which is an agreement among all DMVs to share information and punish their license holders accordingly.6 For example, if a Los Angeles resident gets arrested for drunk driving in Las Vegas, the Nevada DMV will notify the California DMV about the arrest. California will then likely impose a suspension of the person’s California driver’s license.

All out-of-state DUI defendants in Nevada should consult with an attorney in their home state to discuss how their Nevada case could affect their driver’s license.

Note that every DUI arrest in Nevada opens two separate cases that operate independently of each other:

Even if the criminal case ultimately gets dismissed, the Nevada DMV can still impose a license revocation and inform the defendant’s home state about the DUI. The only way to contest a suspension of driving privileges is through a Nevada DMV Hearing.

DMV Hearings are like a small-scale trial where the defendant tries to show he/she did not violate Nevada DUI laws. There is an administrative judge, and the defendant and his/her attorney may call witnesses and present evidence.7 Learn more about Nevada DMV hearings.

6. Are there different DUI standards for out-of-state defendants?

No, Nevada law imposes the same regulations and penalties for both locals and tourists. There is a common misconception that indulging in only “one drink per hour” will prevent a DUI, but in practice that rarely works.

It is against Nevada law to drive drunk or high. Even drivers who are not impaired can be convicted of “DUI per se” for having either:

The defendant’s criminal defense attorney will always try to persuade the D.A. to drop the case or to reduce it to reckless driving. Otherwise, the standard penalties for DUI increase with each successive conviction:8

A large percentage of Las Vegas DUI defendants are tourists who have rented cars. Therefore, judges are reasonable about letting out-of-towners complete sentencing terms in their home states, such as attending victim impact panels and doing community service hours.

7. Will my Nevada DUI count as a prior in my home state?

Probably, although every state is different. It depends on how much time has elapsed between arrests. Therefore, non-Nevadans are advised to seek legal counsel in their home state to discuss how their Nevada DUI case could affect them if they get arrested later for DUI in their home state.

Note that if a person is on probation in another state, picking up a DUI case in Nevada may cause his/her probation to get revoked in that state.

8. Will the DUI show up on my background check?

Yes. Background checks that employers run are not state-specific. People’s criminal case information is shared among local and state police agencies throughout the U.S, including the United States Department of Justice.

The waiting period to seal a DUI record depends on what charge the defendant was ultimately convicted of:

Once a DUI case gets sealed, it should not appear on most background checks. And the defendant can deny under oath having had the DUI.

But there are certain agencies, such as the Nevada Gaming Commission, that can access even sealed criminal records.9

International tourists facing Nevada DUI charges usually never have to return to the U.S. for court as long as they hire a local attorney. If they decide to take a plea, they can just sign, notarize and Fed-Ex the plea agreement to their attorneys. Out-of-country defendants would have to come to court for trial, but DUI trials are very rare.

Also, international defendants should discuss with their attorneys any consequences their DUI case may have on their ability to stay in or return to the U.S., or to go to another country. Every nation has different laws.

The most important thing is that international defendants do not ignore their DUI cases. Otherwise, the judge will issue a bench warrant for their arrest. This may keep them from obtaining a U.S. visa in the future. And if they try to enter the U.S. again, they will get arrested at the port of entry.

DUIs are typically not deportable offenses, but the immigration consequences of a Nevada DUI conviction can vary by the individual case. Attorneys for non-citizens facing criminal charges should always try to get the charges dismissed or reduced to a non-removable offense (if necessary).

10. Why does Las Vegas punish drinking?

It seems disingenuous that “Sin City” — which hails itself as the party capital of the world — is so quick to punish tourists for taking to heart its catchphrase, “What happens here, stays here.” In reality, Nevada law takes a hard line when it comes not only to DUI but any alcohol or drug charge.

It is a misdemeanor in Nevada to drive with open containers of alcohol even if the driver is not drinking. The punishment is up to:

It is also a misdemeanor to walk with an open container in certain areas, such as within 1,000 feet of a liquor store. In unincorporated Las Vegas (including the Strip), the sentence is up to:

In incorporated Las Vegas (including Downtown), the sentence for having an open container is $200.

Nevada has some of the harshest drug laws in the country. A first-time offense of possessing drugs for personal consumption is a category E felony. The court will grant eligible defendants who plead guilty or no contest a deferral of judgment, which means that the court will dismiss the case if the defendant completes certain court-ordered terms. Otherwise, category E felonies carry probation and a suspended sentence. (But if the defendant has two or more prior felony convictions, the court may impose one to four years in Nevada State Prison and up to $5,000 in fines.) Learn more about Las Vegas drug possession penalties.

Even though it is now legal to possess up to one (1) oz. of marijuana in Nevada, it is still unlawful to consume weed anywhere but in a private residence. Recreational pot users face a $600 fine for using in pubic. Learn more about Las Vegas marijuana penalties.11

Technically, Las Vegas does not prohibit pubic intoxication. But it is a misdemeanor to behave in a loud, belligerent, and disruptive way in public. In short, it is okay to be drunk as long as the person is not acting drunk.

Penalties for “breaching” or “disturbing” the peace include up to:

Every year, tens of millions of people travel to Las Vegas for conventions, recreation, or weekend getaways. Visitors have several options to travel around without having to drive themselves. Just some include:

Call us for additional help.

If you have been accused of driving while impaired in Nevada, call our Las Vegas criminal defense attorneys for a consultation. We will investigate every aspect of your case to try to get the charges reduced or dismissed and without you having to come back to Nevada.

Arrested in California? Go to our article about California DUI laws for people out-of-state.

Arrested in Colorado? Go to our article about Colorado DUI laws for people out-of-state.