The court system in Nevada can be very confusing, even to lawyers. Nevada has many different kinds of courts in different locations which all do different things. Sometimes your entire case begins and ends in just one court. At other times, your case is transferred between courts before matters are finally resolved.

In this article, our Las Vegas criminal defense lawyers provide an overview of criminal courts in Nevada and how they work: First we explain the distinctions between district court, justice court and municipal court. Then we list all the specific courts in Clark County and Washoe County and provide links to our informational pages about them.

If I get arrested in Nevada, which court will my case be in?

If you are arrested for a felony, however, you will always be charged in justice court no matter where the felony supposedly occurred in the city. For example,

If I am charged with a crime in Nevada, will my case ever change courts?

So whereas justice court and municipal court may hold trials for misdemeanor cases, only the district court can hold a felony trial. 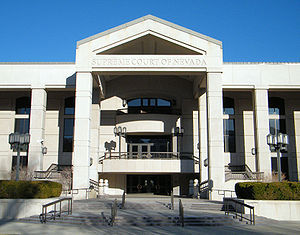 May I appeal my criminal case to the Nevada Supreme Court?

If a district court finds you guilty of a felony, however, then you may appeal it to the Nevada Supreme Court.

What are all the different courts in Clark County and Washoe County?

Below is a list of every criminal court in Clark County, Nevada and Washoe County Nevada. Click on a specific court to learn general information about it, including hours of operation, location, and bail information.

We are here to help…

If you have been arrested, contact our Las Vegas Criminal Defense Attorneys. We will be happy to schedule a free consultation.