Does Nevada still have the death penalty?

Nevada is one of 30 states which permit capital punishment, also called the death penalty. However, the state has not actually carried out an execution since April 26, 2006. A sentence of death is reserved for individuals convicted of murder involving aggravating circumstances.

Specifically, Nevada courts may impose the death penalty only first-degree murder cases where:

The one form of capital punishment Nevada allows is lethal injection.

It typically takes years if not decades for a death row inmate to be executed. People prosecuted for capital murder may be able to get acquitted at trial or have their charge reduced through a plea bargain.

In this article, our Las Vegas death penalty attorneys answer frequently-asked-questions about when, where, how and why capital punishment occurs in Nevada. Click on a topic to jump to that section: 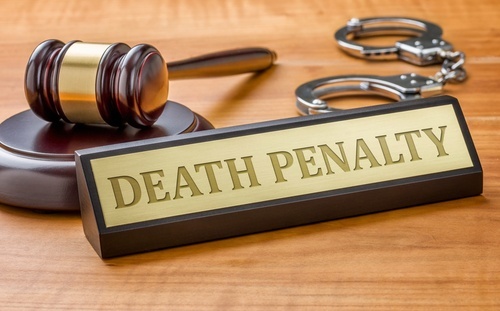 First-degree murder convicts may be sentenced to death in Nevada.

1. Does Nevada have the death penalty?

Yes. Like it sounds, capital punishment is where a convicted defendant is put to death as punishment for the crime.  The death penalty in Nevada may be imposed only in certain first-degree murder cases…

First-degree murder is a deliberate and premeditated killing. Under Nevada’s felony murder rule, first-degree murder also comprises homicides committed in the commission of certain felonies such as rape, robbery, burglary or kidnapping.

On April 13, 2021, the Nevada Assembly passed AB395 to abolish the death penalty. But the bill failed to advance in the state senate.

2. When does someone get sentenced to death in Nevada?

If a jury returns a guilty verdict in a Nevada first-degree murder trial, the case moves into the sentencing phase. The sentencing hearing usually occurs several weeks after the trial ends. This is to give defense counsel time to gather witnesses and craft a case against the death penalty.

A Nevada sentencing hearing is similar to a trial, but the only thing at issue is which punishment to impose. In first-degree murder cases, the jury decides between imposing one of the following sentences:

3. Who gets the death penalty?

A Nevada jury may hand down the death sentence to a defendant convicted of first-degree murder only if:

Aggravating circumstances in Nevada first-degree murder cases can be any of the following:

In contrast, mitigating circumstances in Nevada first-degree murder cases are much more open-ended. They can be any fact or testimony that makes the defendant seem less deserving of the death penalty. Some examples are:

Mitigating factors are crucial in avoiding the death penalty in Nevada.

It is typical for friends and family of the defendant to testify at the sentencing hearing or write letters to the judge about the defendant’s virtues and asking for leniency.4

4. How long does someone stay on death row?

It varies, but it usually takes several years and sometimes decades. This is because there are so many different court procedures that happen first. Learn more in the next question.

5. How do I fight a death sentence?

Fighting a capital punishment sentence is a very lengthy and complex process in Nevada. It may include such procedures as motions for a new trial, appealing to the Nevada Supreme Court and U.S. Supreme Court, filing a petition of habeas corpus, and requesting clemency from the Nevada Board of Pardons.

Note that just because a person is charged with murder does not mean he/she will be convicted. It may be possible to win an acquittal at trial or to persuade the prosecutor to reduce the charges.

6. Who is exempt from the death penalty?

Children may not be sentenced to death in Nevada.

Nevada may not execute:

7. How is the death penalty done in Nevada?

Lethal injection is currently the sole method of execution.7

The lethal injection process begins when the inmate is strapped to a gurney and receives an IV. The first substance injected is an anesthetic to make the inmate unconscious. The second substance is paralytic, which paralyzes the diaphragm. The final injection of potassium chloride causes cardiac arrest.8

Now and for the foreseeable future, no capital punishments are being performed in Nevada because the makers of the drug Alvogen and Sandoz Inc. are objecting to their anesthetic and paralytic products being used for execution.9

8. Where is the death penalty done in Nevada?

Nevada’s one execution chamber is located at Ely State Prison. Death Row is located there as well.10

9. When was the last lethal injection?

The last time a death-row inmate was executed in Nevada was April 26, 2006. His name was Daryl Linnie Mack. He had been convicted of strangling Betty Jane May to death in 1988. DNA evidence tied him to her rape and murder.11

If you would like to speak with our Las Vegas criminal defense attorneys for free about your case. We may be able to negotiate your charges down to lesser offenses or a full dismissal. And if you wish we are always ready to go to trial in your defense.

Nevada presentence investigations (PSIs) are reports conducted by the Division of Parole and Probation (NPP) on each defendant who gets convicted of a felony. First the NPP interviews the defendant. Then it composes the PSI report for the court, which relies on it to determine criminal sentences and whether the defendant can get probation instead ...