A casino marker is a line of credit that gaming establishments extend to players to use for gambling at the property. It is treated as a check that the customer issues to the casino to be drawn on his or her bank account. Customers who fail to repay the marker may face civil action to collect the debt, as well as criminal charges for check fraud or passing bad checks.

In Nevada, failing to pay a casino marker is treated as criminal check fraud under NRS 205.130. Nevada law presumes people to have an “intent to defraud” if there are insufficient funds in their bank account when the casino attempts to redeem their markers.

NRS 205.130 states that “[A] person who willfully, with an intent to defraud, draws or passes a check or draft to obtain … [c]redit extended by any licensed gaming establishment … when the person has insufficient money, property or credit with the drawee of the instrument to pay it in full upon its presentation, is guilty[.]”

Not paying back a marker of at least $1,200 is a category D felony in Nevada. It carries:

Defendants who leave the state to escape charges face extradition to Nevada.

Nevada casino marker debts may not be discharged through bankruptcy unless the D.A. drops the charges. 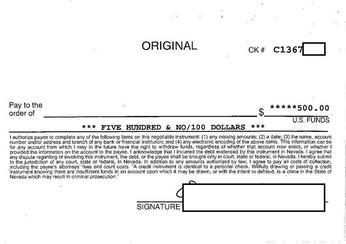 Not paying back casino marker debt in Nevada is a crime under NRS 205.130.

1. How do casino markers work?

Casino markers are zero-interest loans that casinos extend to patrons as an incentive to gamble. Legally, these lines of credit are treated like checks. Patrons are expected to pay them back within 30 days (usually).1

Practically speaking, casino markers make gambling more convenient. Without these cash advances, patrons would have to carry large amounts of money on their person. Or rely on ATMs and pay extra fees.

Customers wishing to take out markers must fill out a credit line application first.2 For examples in Nevada, see:

1.1. Casino markers as a crime in Nevada

Nevada makes it a crime under NRS 205.130 to default on casino markers. The offense consists of two elements:

Nevada law presumes defendants had an intent to defraud if there were insufficient funds in their bank accounts when casinos tried to redeem markers.4 So if a person’s bank account overdrafts, that person is essentially guilty until proven innocent in Nevada.5

The only evidence Nevada courts need to convict someone of unpaid casino markers are the following two slips of paper:

Nevada is the only state where allegedly not making good on casino markers subjects the person to criminal penalties.6

1.2. What happens with unpaid casino markers

Before the state can prosecute for unpaid markers, the following must occur:

Once an arrest warrant issues for a Nevada casino marker defendant, the police probably will not go searching for the defendant. But there are exceptions. Such as if the defendant is a flight risk. Or has a long criminal history.

In most cases, the D.A. will mail the defendant a summons with notice of the warrant. The summons will contain instructions to appear in the appropriate Nevada court on a specified date. But during this time while the warrant is outstanding, the defendant is still vulnerable to arrest. This typically occurs during traffic stops after the police run a warrant check.

It is important that the defendant arrives at court on the summons date with an attorney. An attorney may be able to persuade the judge to waive bail. This is called an O.R. (own recognizance) release. Otherwise, defendants who show up without an attorney are more likely to get booked at jail. And the bail amount will be the total sum of the alleged casino marker debt.

Unlike in other states, failing to pay a casino marker in Nevada is a crime. The punishment turns on the amount of the marker.

Suspects face separate charges for each unpaid casino marker. Not just one charge for the entire debt.

Example: John defaults on a $5,000 marker and a $20,000 marker from Bellagio. Neither marker is for less than $1,200. So the Clark County D.A. prosecutes John for two felonies. If John gets convicted, a judge may sentence him to:

Nevada D.A.s understand that defaulted markers are non-violent offenses. And they realize that incarcerated defendants cannot earn money to pay back the casinos. Therefore, prosecutors are usually willing to resolve casino marker cases.

If the defendant has no prior casino marker cases and behaves cooperatively, prosecutors may be willing to set up a monthly payment plan. Once the casinos get reimbursed in full, the D.A. may dismiss the charges.

However, repeat casino marker offenders may not be able to escape prosecution even if they pay everything back. The D.A. may request that the defendant remains on probation for a few years and be barred from entering Nevada casinos to gamble.

Another option D.A.s may consider is this plea bargain: The defendant pleads guilty to a gross misdemeanor and signs a civil confession of judgment. This is a legal admission that the defendant owes the casinos money. This way, the only way casinos can pursue their money is through suing the defendant in civil court.

The advantage of this approach is that the defendant forgoes prison by being on probation. And the casino may decide not to take the trouble and expense of suing the defendant after all. Especially if the defendant is judgment-proof. 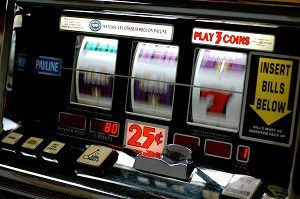 Casinos can sue patrons for defaulting on casino markers.

Two common ways to fight Nevada casino marker charges are to argue that:

Sometimes casinos issue markers that do not qualify as checks under Nevada law. In those instances, courts should not convict people for neglecting to pay them. Markers are invalid if they:

If the defense attorney can show that the markers fall outside of Nevada’s bad check laws, the D.A. should dismiss the case.

Nevada courts should not convict defendants of unpaid casino markers if they had no intent to defraud. However, this is a difficult defense strategy. The law presumes that defendants had the intent to defraud if their bank accounts had insufficient funds when the casino tried to redeem the markers.15

But it may be possible to overcome the presumption of intent to defraud. The following circumstances are not full defenses. But they may chip away at the state’s argument that a defendant intended to defraud the casino:

Various defendants in past casino marker cases have challenged whether markers are indeed “checks.”19 They argued that NRS 205.130 violates equal protection.20 And they argued that it creates an unconstitutional debtor’s prison. So far Nevada courts have rejected these positions.

It depends on the state and circumstances.

In Nevada, a casino marker debt is not dischargeable in bankruptcy unless:

In other states where unpaid markers are not a crime, people might be able to discharge their debt in bankruptcy. But the trustee will have a large say in this.

5. Can casinos sue for unpaid markers?

Yes. In Nevada though, most casinos do not sue. They allow the District Attorney to be their debt collector. One exception is Sands casinos (including Las Vegas’s Venetian). They do sue defendants for:

However, Sands typically withdraws these lawsuits if the criminal case resolves.

Nevada permits record sealing of casino marker cases. If the charge gets dismissed, defendants can pursue a seal right away.23 If the defendant gets convicted, there is a waiting period:

Nevada’s record seal process itself takes several weeks. But it is worth it. NRS 205.130 violations look bad on background checks. Learn more about how to seal Nevada criminal records.

7. What if defendants live out of state?

Defendants usually must appear in Nevada court for felony arraignments. This is true even if they hire local counsel.

If defendants do not appear, courts will issue a warrant. Then they are vulnerable to arrest in all other states – even though those states do not criminalize unpaid markers.25

Every state has its own extradition laws. Some states may release fugitives on bail pending extradition. (Like Florida and Hawaii.) But other states may not. (Like California).

Negotiating marker cases is easier when defendants are out of custody. Therefore, defendants should retain counsel as soon as possible. And they should try to appear in person at all required court hearings.

8. Can immigrants get deported for unpaid casino markers?

Yes, especially if the conviction is for a felony. Non-payment of markers is a crime involving moral turpitude. This is because it involves intent to defraud.26

Non-citizens facing charges should consult with an attorney. A lawyer can negotiate with the D.A. Perhaps they can work out a financial settlement. And the D.A. may agree to drop the case. This way, aliens could avoid removal.

People struggling with a gambling addiction may want to look into joining Gamblers Anonymous.

What Happens if I Get a 4th DUI in Nevada?