NRS 202.448 is the Nevada law that makes it a crime to issue a threat related to terrorism with the intent to:

A person can be convicted of terrorist threats even if nobody was hurt. The statute states:

A person shall not, through the use of any means of oral, written or electronic communication, knowingly make any threat or convey any false information concerning an act of terrorism or the presence, development, manufacture, production, assemblage, transfer, transportation, acquisition, retention, storage, testing, possession, delivery, dispersion, release, discharge or use of any weapon of mass destruction, any biological agent, chemical agent, radioactive agent or other lethal agent or any toxin with the intent to:

(a) Injure, intimidate or alarm any person, whether or not any person is actually injured, intimidated or alarmed thereby;

(c) Extort or profit thereby, whether or not the extortion is actually successful or any profit actually occurs; or

(d) Interfere with the operations of or cause economic or other damage to any person or any officer, agency, board, bureau, commission, department, division or other unit of federal, state or local government, whether or not such interference or damage actually occurs.

If the threat involved an explosive, the suspect would instead face prosecution under the separate offense of making a bomb threat in Nevada (NRS 202.840)

Making terrorist threats in violation of NRS 202.448 is a category B felony. The sentence includes:

But it may be possible to persuade the prosecutor to agree to a plea bargain where the charge gets reduced down to a more minor offense or possibly a dismissal.

In this post-9/11 world, law enforcement takes very seriously any hint of sabotage or violence that could lead to substantial injury or destruction to the general population. Consequently, any word or action people make that police believe may be related to terrorism can subject them to criminal prosecution for terrorist threats. 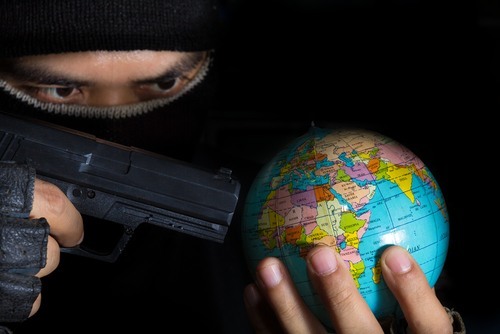 Even if no one gets injured, making a terrorist threat is a category B felony in Nevada carrying up to 20 years in prison.

It does not matter whether the threat actually resulted in any harm. Merely communicating a threat with the intent to cause injury, panic, profit or destruction qualifies as criminal activity.1 Examples include:

Also note that in California law, this offense is commonly called “criminal threats” (Penal Code 422 PC) rather than “terrorist threats.”

There are several possible ways to fight Nevada charges of making terrorist threats.

Which defenses would be most effective in fighting charges of violating NRS 202.448 in Nevada depend on the facts of the case.  Some of the more common strategies a defense attorney may use are:

Note that it is not a defense to NRS 202.448 allegations that nobody was physically harmed.

A person is not criminally liable for violating NRS 202.448 if he/she did not deliberately mean to injure or alarm anyone, cause panic, make a profit or interfere with government operations. If the D.A. cannot show that the defendant’s intentions were malicious, the whole case may be thrown out.

Example: While at a restaurant, Jack makes a bad joke to his wife how he hates air travel so much he is going to hijack his next flight. Someone at the next table overhears and informs the Las Vegas Metropolitan Police Department. But when the police determine Jack was not serious and had no intent to alarm anyone, they decide not to arrest him.

Had Jack in the above example made a similar comment while in the airport or on a plane, authorities probably would have detained and interrogated him extensively before letting him go.

Perhaps someone falsely accused the defendant out of revenge, anger or an innocent misunderstanding.

False allegations is a defense to any criminal charge.

Example: Kim is enraged at her ex-husband Tom for not paying child support. So she calls the Henderson Police and claims she heard him say that he was going to shoot up their church. The police arrest Tom for making terrorist threats. But if the defense attorney can show that Kim lied, the charge should be dropped.

Note that Kim in the above example could face charges for filing a false police report in Nevada.

NRS 202.448 is not meant to curtail a person from speaking freely or having emotional outbursts to their physicians and attorneys.

Example: Jim is an inmate at Clark County Detention Center. During a session with the jail psychotherapist, he cries over his abusive childhood and said that he dreams of shooting up his old high school when he gets out. The psychotherapist reports this to the warden, and prosecutors arrest him for making a terrorist threat. But the judge in the case determines that the context of Jim’s words…an emotional therapy session…protects his speech from prosecution.3

No matter the context, the prosecution has the burden to prove guilt beyond a reasonable doubt. As long as the defense attorney can show that the state’s evidence is inadequate to support a conviction, the NRS 202.448 charge should be dropped.

Violating NRS 202.448 is prosecuted as a category B felony in Nevada. The punishment may include:

When determining the sentence, judges consider the circumstances surrounding the alleged threat such as:

Depending on the case, D.A.s may try to avoid trial by offering to reduce NRS 202.448 charges down to:

It may be possible to seal NRS 202.448 convictions after five or ten years in Nevada.

The law is currently unclear.

Certainly, a criminal defense attorney would try to argue that making terrorist threats is not a crime of violence and is therefore able to be sealed after only five (5) years.

If the charge got dismissed (meaning the defendant did not get convicted), there is no waiting period to pursue a seal. Learn more about how to seal Nevada criminal records.7

Making a terrorist threat is a deportable offense because it is a crime involving moral turpitude.8

Therefore, non-U.S.-citizens who are accused of violating NRS 202.448 should hire an attorney to attempt to get the charge dismissed or else switched to a non-removable crime.

If after reading this you would like a consultation with our Las Vegas criminal defense lawyers, call us. We may be able to negotiate your charges down to a lesser crime or even have it dismissed. And if necessary, we are always ready to fight for you at trial.

Arrested in California? Go to our informational webpage on Penal Code 422 PC.