A driver failing to exercise due care to a cyclist in Nevada can be cited for a misdemeanor. A first-time offense carries a fine of $250 to $1,000 and (in extremely rare cases) jail. Additionally, four (4) Nevada demerit points will be added to the person's driver's license.

The penalties for not exercising due care to a bicyclist in Nevada increase with each successive conviction. And if the defendant's actions caused a collision, he/she will also be ordered to complete community service: 50 to 99 hours for a first offense.

It is often possible to get Nevada traffic tickets reduced to non-moving violations, which carry lesser fines and no demerit points. Though violating NRS 484B.270 may be a minor offense, people who blow off paying their fine (or who do not hire an attorney to fight the ticket) will be slapped with a bench warrant for their arrest.

In this article our Las Vegas traffic ticket attorneys answer frequently-asked-questions about "not exercising due care to bicyclists" in Clark County and throughout Nevada, including how to build a defense, what sentences to expect, avoiding demerit points, when to seek a record seal, and more. Click on a topic below to jump directly to that section:

Also see our article on lack of due care towards a pedestrian in Nevada.

If you were riding a bike and was injured by a driver, you may be entitled to a hefty settlement. Contact our Las Vegas personal injury attorneys to learn more.

Motorcyclists who fail to yield to a bicyclist in Nevada may be charged with a misdemeanor carrying fines and possibly community service.

1. Is "not exercising due care to bicyclists" illegal in Las Vegas, Nevada?

Motorists in Nevada are required to exercise "due care" when sharing the road with bicycles and electric bicycles. Specifically, Nevada law provides five common sense rules:

Conversely, cyclists are required to exercise due care as well by (1) not intentionally interfering with the movement of a motor vehicle, or (2) not overtaking and passing a motor vehicle unless the cyclist can do so safely without endangering him/herself or the occupants of the motor vehicle.1

2. How do I fight charges for "not exercising due care to bicyclists" in Las Vegas, Nevada?

The most valuable evidence would include surveillance video, photos, and/or eye-witnesses that can attest to the motorist's careful driving or the bicyclist's carelessness. If the incident resulted in a collision, an accident reconstruction expert may be able to deduce from the property damage and injuries (if any) that the motorist was not to blame.

In many cases, however, there is no evidence other than the driver's and cyclist's testimony. And if the D.A. has insufficient evidence to prove guilt beyond a reasonable doubt, the defendant should not be convicted.

3. What are the penalties for "not exercising due care to bicyclists" in Las Vegas, Nevada?

Motorists who allegedly fail to exercise due care to avoid a collision with a cyclist face a misdemeanor charge. The punishment is similar to reckless driving penalties, which grow harsher with each successive conviction:

Note that community service is mandatory only if the defendant's lack of care was the proximate cause of a collision with a cyclist. And if the cyclist was severely injured or killed in an accident, the motorist faces more severe charges such as felony reckless driving or vehicular manslaughter.2

4. Can I get a charge for "not exercising due care to bicyclists" reduced to a non-moving violation in Las Vegas, Nevada?

Possibly, as long as there are no extenuating circumstances and there was no serious accident.

5. How many points will "not exercising due care to bicyclists" put on my driver's license in Las Vegas, Nevada?

If a driver ever accumulates twelve (12) or more demerit points, he/she will get his/her license suspended for six (6) months. But if the defendant fights the charge and it gets reduced to a non-moving violation, no demerit points will be added.3

Once a license does get suspended in Nevada, the driver can request a DMV hearing to argue that the suspension is unlawful. However, it is highly recommended that the driver hire a criminal defense attorney to appear at the hearing because it is very similar to a regular trial.

While a driver's license is suspended in Nevada, the driver should avoid taking the wheel. Driving with a suspended license is a misdemeanor in Nevada that carries up to six (6) months in jail and/or up to $1,000 in fines.4

6. Will "not exercising due care to bicyclists" in Las Vegas, Nevada increase my auto insurance rates? 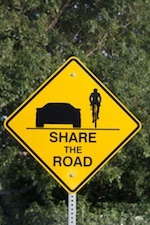 Yes. But if the defendant hires an attorney who gets the citation reduced to a non-moving violation, the insurance company probably will not penalize the driver.

After a 30 day grace period, Nevada courts issue bench warrants to people who do not handle their traffic tickets. And people must be given the opportunity to do community service in lieu of paying the fine before a bench warrant can issue.

Once a person has a bench warrant, he/she cannot get rid of it just by paying the fine...

It is advised that people with outstanding bench warrants hire an attorney to file a motion to quash the warrant and appear at the hearing. This way, the attorney can go to court without the defendant having to show up (in the majority of cases).

Note that the Nevada DMV may also suspend the driver's license of people who do not show up at court. A criminal defense attorney can then ask a judge to issue an "FTA (failure to appear) clearance" that would allow the DMV to reinstate the license.6

The Nevada DMV will add four (4) demerit points to the person's commercial driver's licenses (CDL). In addition, the driver is required to tell his/her employer about the citation no later than thirty (30) days after getting ticketed.7

The person's home-state DMV will usually penalize the person's license, but the penalty varies state-by-state. So out-of-state people who get ticketed in Nevada should retain an attorney in their home state to discuss their particular DMV consequences, and how to fight them.

11. When can I seal a conviction for "not exercising due care to bicyclists" in Las Vegas, Nevada?

All traffic misdemeanor convictions (except DUI) in Nevada have a one (1) year waiting period before the defendant can try for a record seal. Note that this waiting period does not start until the case ends (usually when the fine is paid).8

There is no waiting period to try for a record seal in Nevada if the traffic charge gets dismissed completely.9

Not yielding to a cyclist is a non-deportable crime. That being said, immigration laws can change at any time. Therefore, non-citizens are still encouraged to hire an experienced immigration and criminal defense lawyer to represent them on traffic tickets in an effort to safeguard their resident status and avoid immigration court. Learn more about the criminal defense of immigrants in Nevada. 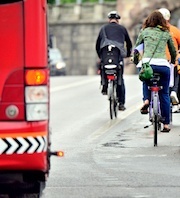 Just paying the fine is not recommended because the citation will put four (4) points on the person's license. In most cases, the D.A. is willing to reduce moving violations to non-moving violations that carry no demerit points.

Yes, but the defendant can have only a bench trial, where the judge deliberates whether the defendant is guilty or not guilty. Jury trials are not available to most traffic ticket defendants in Nevada.

Anyone cited for not yielding to a cyclist in Nevada is highly encouraged to have a lawyer handle their citation. It increases the chances of a good result, and it usually relieves the defendant from having to show up to court.

Were you ticketed for "not exercising due care to bicyclists" in Clark County or elsewhere in Nevada? Our Las Vegas criminal defense attorneys at 702-DEFENSE (702-333-3673) want to have a FREE consult with you. Our mission is to get traffic tickets dismissed or reduced to non-moving violations with no demerit points and no traffic school.

Are you a cyclist who was injured by a driver? Even if you were not completely blameless, our Las Vegas car accident attorneys will still fight to win a hefty financial settlement to cover your medical bills, pain and suffering, lost wages, and loss of future earnings. And you pay zero unless we win your case.