NRS 33.100 is the Nevada law that makes it a crime to violate a restraining order for domestic violence. Restraining orders also go by the name protective orders, and they can be temporary or extended. The statute states:

A person who intentionally violates [a temporary order or an extended order for the first time] is guilty of a misdemeanor, unless a more severe penalty is prescribed by law for the act that constitutes the violation of the order.

In this article, our Las Vegas criminal defense attorneys provide basic information about restraining order violations in Nevada under NRS 33.100. Keep reading to learn more about its definition, possible defenses, and the penalties a conviction carries.

What happens if you violate a restraining order in Las Vegas?

Nevada courts grant temporary or extended restraining orders to people allegedly at risk of being victims of either of the following five crimes:

Each protection order is unique to the individual case. Protection orders may include provisions on anything from child visitation and relinquishing firearms to which locations are off-limits for the adverse party to go. Violating any provision in a restraining order is grounds for prosecution in Nevada.

What should one do if accused of this crime? 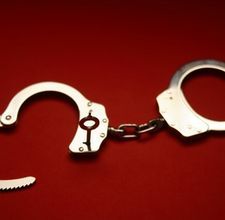 A person is not guilty of violating NRS 33.100 in Nevada if he/she did not have intent to violate the restraining order.

Violating a restraining order may be a misdemeanor, gross misdemeanor or a felony depending upon the kind of order.

How best to fight allegations of a restraining order violation in Nevada turns on the specific facts of the case. Three common defense strategies include the following:

What are the penalties and consequences?

Deliberately violating any restraining order against harassment in the workplace (under NRS 33.350) is prosecuted as a misdemeanor in Las Vegas. The sentence is:

Deliberately violating a temporary restraining order against domestic violence (under NRS 33.100) is prosecuted as a misdemeanor in Las Vegas. The sentence is:

Deliberately violating an extended restraining order against domestic violence (under NRS 33.100) for the first time is prosecuted as a misdemeanor in Las Vegas. The sentence is:

A second-time offense of violating an extended order is a gross misdemeanor in Nevada, carrying:

A successive offense of violating an extended order is a category D felony in Nevada, carrying:

Possessing a firearm when required not to under a restraining order is a category B felony in Nevada, carrying 1 to 6 years in Nevada State Prison and maybe a $5,000 fine.

Stalking or harassment, sexual assault, or protection of children

Meanwhile, deliberately violating a temporary protective order against stalking or harassment (under NRS 200.591), sexual assault (under NRS 200.378), or child abuse (under NRS 33.400) is prosecuted as a gross misdemeanor in Las Vegas. The sentence is:

Finally, deliberately violating an extended restraining order against stalking or harassment, sexual assault, or child abuse is prosecuted as a category C felony in Las Vegas. The sentence is:

Possessing a firearm when required not to under a restraining order is a category B felony, carrying 1 to 6 years in Nevada State Prison and maybe a $5,000 fine.

If you have been charged with violating a restraining order in Nevada, call Las Vegas criminal defense attorneys at 702-DEFENSE (702-333-3673) to talk for free. They may be able to negotiate a favorable resolution with prosecutors, or else they will fight the allegations all the way to trial.