The crime of assault with a deadly weapon occurs whenever a perpetrator wrongfully attempts to injure another person by the use of a deadly weapon. The law defines a deadly weapon as any instrument likely to cause great bodily injury. The category that includes guns and knives as well as objects such as motor vehicles, beer bottles and pencils when used in a violent manner.

Assault with a deadly weapon is often referred to as “ADW” or aggravated assault. The crime of assault (Penal Code 240 PC) is the unlawful attempt to violently injure someone.

In California, ADW is defined in Penal Code 245 a 1 PC, which states that "any person who commits an assault upon the person of another with a deadly weapon or instrument other than a firearm shall be punished by imprisonment in the state prison for two, three, or four years, or in a county jail for not exceeding one year, or by a fine not exceeding ten thousand dollars ($10,000), or by both the fine and imprisonment.”

Getting arrested or charged with ADW does not necessarily mean the accused will be convicted. Common defenses include showing that

Misdemeanor ADW is punishable by custody in county jail for up to one year.

Felony ADW is punishable by imprisonment in state prison for up to four years.

These penalties grow more severe if a firearm gets used in the commission of the assault. 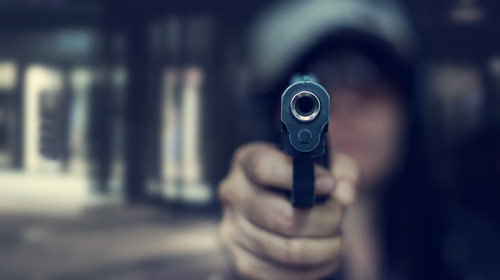 A person commits ADW when he assaults someone with either a deadly weapon, or, force likely to cause great bodily injury.

1. What is assault with a deadly weapon?

Under California law, a prosecutor must prove the following to convict a defendant of ADW:

Note that the “victim” of an ADW does not have to get injured for a criminal charge. The focus is on whether the accused's act could have resulted in the application of force. It is not on whether the force was actually applied.2

The slightest touching will count if it is done in a rude or offensive manner.3

An assault with a deadly weapon can occur even if the touching was not direct. The touching can be done indirectly. For example, a person causing an object to touch the “victim.”4

And note that it is not necessary that an accused succeeded in applying force to the other person. All that is required is that:

Example: Jenny gets into a heated argument with her neighbor. She throws several rocks (deadly weapons) at him in anger. Only one rock barley touches the neighbor's sleeve. Here, Jenny could be charged with ADW. She was in anger, the rocks were potentially harmful, and one slightly touched the neighbor.

Note that a charge could still be brought if none of the rocks hit the neighbor. No force has to actually be applied for a charge under this statute.

For purposes of this statute, a “deadly weapon” is:

This definition includes the obvious deadly weapons such as:

This means something greater than minor harm.13

Examples of great bodily injuries are:

Under this law, a person acts “willfully” if he does something willingly or on purpose. It is not necessary that the person intended to:

Example: Mark and Anthony are on a neighborhood softball league. During a game, the two get into a bad argument. Mark grabs a softball and throws it near Anthony. The ball ricochets of a fence and hits him.

Mark is charged with ADW. He says, in defense, that he is not guilty because he never intended to hit Anthony with the ball. This is not a valid defense. It doesn't matter if he didn't intend to hit Anthony. It only matters that he purposefully threw the ball in his direction.

Fortunately, there are legal defenses to assault with a deadly weapon

2. Can "assault with a deadly weapon" charges be dropped?

A defendant can potentially get ADW charges dropped by asserting a legal defense. Three common defenses are:

A defendant is only guilty under this law if he committed an assault with a deadly weapon. This means it is a defense for an accused to show that:

An accused can support his defense by highlighting certain facts to show the object he had was not deadly. For example, maybe he threw a balloon at another person.

Please recall that a defendant is only guilty under PC 245 a 1 if he acted willfully. It is a valid defense, therefore, for an accused to show that he did not act with this intent. Perhaps, for example, he committed an act on accident and without a specific purpose.

A defendant can try to beat an ADW charge by saying that he acted in self-defense.

Example: Kelly is walking home at night. A man jumps out from an alley and says he is “going to make her feel right.” Kelly grabs a bottle and throws it at the man.

Here, Kelly does commit an assault with a deadly weapon. But she is not guilty of the rime because she acted in self-defense. She reasonably believed that she was going to be raped. Force was necessary to get away. And she used an appropriate level of force.

245 a 1 PC is charged as a wobbler offense if the deadly weapon that was used was not a firearm. ADWs committed with a firearm are discussed in 3.1 below.

Note that these penalties will change if an assault with a deadly weapon case:

If an ADW was committed with an ordinary firearm, then the offense is still charged as a wobbler. The penalties are the same as those outlined above. The only change is that misdemeanor convictions carry a minimum jail term of six months.18

An ADW conviction will be a straight felony if it was committed with:

The penalties in these cases can include a prison term of up to twelve years.20

3.2. ADW on a police officer or firefighter

Assault with a deadly weapon is charged as a straight felony if:

In these situations, the crime is punishable by up to five years in state prison.22

If the crime was committed with a firearm, then the prison term could rise to 12 years.23

A conviction of ADW weapon may have negative immigration consequences.

The law states that if a non-citizen commits an aggravated felony, then:

The law states that felony ADW is:

This means negative consequences ensue if a defendant is convicted of a felony under PC 245a.

A person convicted of this crime can get an expungement. This is true provided that the defendant successfully completes:

Penal Code 1203.4 PC says an expungement releases an individual from virtually "all penalties and disabilities" arising out of the conviction.25

A conviction under this statute may have negative effects on the defendant's gun rights.

Recall that ADW can be charged as either a misdemeanor or a felony. If an accused is charged, and convicted of, felony ADW, then he will lose his gun rights.

There are three crimes related to ADW. These are:

Penal Code 417 PC is the California statute that defines the crime of brandishing a firearm or deadly weapon. A person commits this offense by:

Note that unlike ADW, a PC 417 conviction does not require proof of an assault.

Per Penal Code 217.1 PC, a person commits the crime of assault on a public official when:

Unlike ADW, a person is guilty of this crime even if he did not use a deadly weapon in the commission of the assault.

A person can commit an assault with a deadly weapon with a dangerous animal if:

For information on ADW charges in Nevada and Colorado, please see our articles on