Penal Code 417 PC is the California statute that makes it a crime to brandish a firearm or deadly weapon. “Brandishing” means to draw or exhibit a deadly weapon or firearm, or to use one in a fight. The offense is generally prosecuted as a misdemeanor and punishable by up to one year in jail and fines of up to $1000.00.

A defendant can raise a legal defense to contest a brandishing weapons charge. A few common defenses are that the defendant:

A violation of this statute is typically charged as a misdemeanor (rather than a felony or an infraction). As a misdemeanor, the crime is punishable by imprisonment in county jail for up to one year.

More severe punishments of these weapon charges can include:

As a violent firearm offense, brandishing conviction may have negative:

A person convicted of this offense is entitled to an expungement if he or she completes: 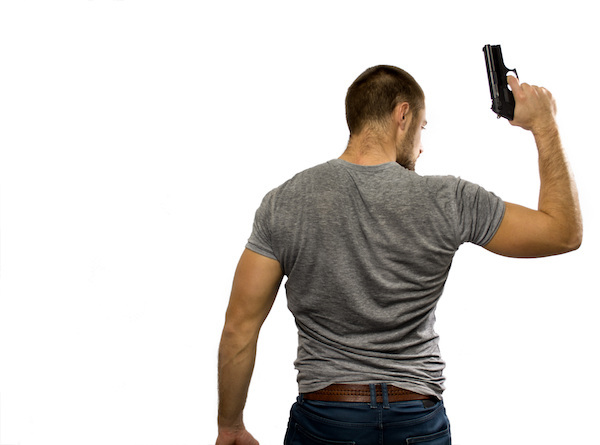 Penal Code 417 makes it a crime for a person to brandish a weapon or firearm.

1. What does it mean to brandish a firearm or weapon?

Penal Code 417 makes it a crime for a person to brandish a weapon or firearm.1

A prosecutor must prove the following elements of the crime to convict a defendant of brandishing:

A deadly weapon is any object or weapon that is inherently deadly. It is also one that can be used to cause death or great bodily injury.3

Note that it is not necessary for a weapon to be pointed at someone for it to be “deadly.”4

Example: John is arguing with his girlfriend and grabs a hammer and a baseball bat. These objects are deadly weapons under the circumstances, no matter if he points them at his girlfriend or approaches her while waving them in the air.

As to cases involving an unloaded or loaded firearm, a defendant can be guilty of a crime even if the alleged victim was not aware that the accused had a gun.5

Example: Jose angrily takes out his concealed carry gun and waves it at a drunken bar patron. While the patron may not have realized there was a gun (because intoxicated), Jose is still guilty of a crime.

A defendant can raise a legal defense to try and beat a brandishing charge. In any case, the D.A. has the burden to prove guilt beyond a reasonable doubt.

A person is innocent under this law if he or she was acting in justifiable self-defense or the defense of another person. A person lawfully acts in self-defense when he:

Example: It is appropriate self-defense when Carol points a broken bottle at Mark after he threatens to rape her. Here, the threat makes her believe that she is about to be harmed and the use of a broken bottle is not excessive force under the circumstances.

Recall that a person is only guilty under this statute if he or she brandished a weapon or gun in a “rude, angry, or threatening” manner (as determined by the facts of the case). This means it is a defense for an accused to show that he or she did not act in such a way.

2.3. No deadly weapon or firearm

PC 417 only applies if a defendant was armed with a “deadly weapon” or a firearm. Therefore, a defense is for the defendant to show that he or she did not have one of these objects.

Brandishing a weapon can result in a jail sentence in California.

Most violations of this statute are charged as misdemeanors.7 The offense is punishable by imprisonment in the county jail for three months up to one year. Brandishing a firearm capable of being concealed is also a misdemeanor if it occurs in a public place or on public property, carrying three months to one year in jail, and/or up to $1,000 in fines.8

Brandishing is a misdemeanor even if it occurs on school property. But note that if a person brandishes a firearm on the grounds of a day-care center while it is open for use, this crime becomes a wobbler. This means the person can be charged with either:

The same penalties apply if a person brandishes a firearm in the presence of a peace officer or police officer or other law enforcement officer who is engaged in his/her duties.10

4. Does this crime lead to deportation of noncitizens?

A conviction may have negative immigration consequences.

Firearm offenses can mean that:

This means a brandishing conviction can prove detrimental if the act was done with a gun.

People convicted of this crime are entitled to an expungement of their criminal record provided that they:

If a party violates a probation term, he or she could still possibly get the offense expunged. This, though, would be in the judge’s discretion.

Under Penal Code 1203.4, an expungement releases an individual from virtually “all penalties and disabilities” arising out of the conviction.12

6. Does a conviction affect a person’s gun rights?

A conviction under PC 417 may have a negative effect on the convicted party’s gun rights.

According to California law, convicted felons are prohibited from acquiring or possessing a gun in California. The same holds true for people with two or more convictions under PC 417.

Therefore, a defendant will lose his or her gun rights under this law if:

7. Are there crimes related to the brandishing of a weapon?

There are three criminal charges related to brandishing a weapon or firearm. These are:

Under Penal Code 245a1 PC, a person commits this crime if he or she:

Unlike Penal Code 417, this law requires a showing that a defendant intended to harm the alleged victim.

Per Penal Code 245a2 PC, a person commits a crime if he or she commits an assault with a firearm.

Like PC 245a1, this code section requires a showing that the accused intended to harm the alleged victim.

“Great bodily injury” is a legal term that means a significant or substantial bodily harm.

Penal Code 422 PC makes it a crime to threaten to kill or physically harm another person. As a wobbler, it can be a felony or a misdemeanor.

Contact us for legal help and free case evaluation.

If you or someone you know has been accused of a crime under Penal Code 417 PC in Los Angeles County or elsewhere in California, we invite you to contact our criminal defense lawyers for a free consultation and legal advice.

For similar accusations in Nevada, please see our article on: “Nevada Laws for ‘Drawing a Deadly Weapon in a Threatening Manner’.”