Joinder is when two or more criminal charges or co-conspirators are combined into one criminal case in Nevada. Joinder may be convenient for prosecutors, but it is often harmful to defendants.

Each criminal charge lends itself to specific defense strategies, so fighting one charge could hurt a defendant’s ability to prevail on another at a trial. And co-defendants often have conflicting interests, which could preclude them from advancing effective defenses on their own behalf.

In this article, our Las Vegas criminal defense attorneys discuss how joinder works in the criminal court process: 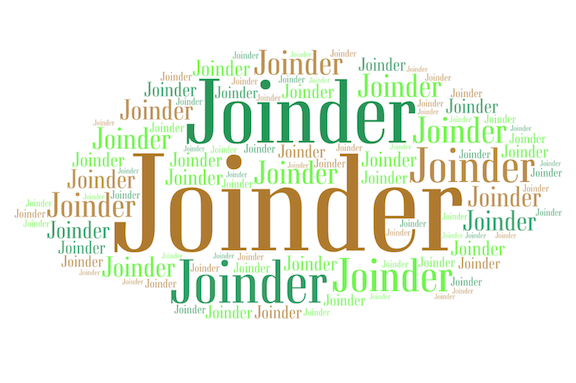 Joinder is the joining of offenses or co-conspirators into one case.

In short, the D.A. does not have to bring a separate case for each separate offense if those offenses are sufficiently related.

Example: One night Oliver breaks into a North Las Vegas home and steals a $100 worth of property. He gets caught and arrested for burglary and petty larceny. Since the burglary and petty theft arose out of the same act, the prosecutor can charge Oliver of both crimes in just one case.

As in the example above, prosecutors may join related offenses into one case no matter whether they are felonies, gross misdemeanors, or misdemeanors.1

Prosecutors often make their joinder decision at the beginning of a case before the arraignment. They usually name all the charges in the initial charging documents (either an “indictment” or an “information”). But courts may elect to join offenses after the case has been ongoing.2

Alleged co-conspirators are usually charged in the same case.

In short, the D.A. does not have to bring a separate case for each defendant if those defendants participated in the same criminal activity.

Example: Jude and Tex rob a liquor store and drive away in Jude’s car. Jude is drinking and eventually gets into an accident. Since Jude and Tex both robbed the liquor store, the prosecutor charges them both with robbery and conspiracy in the same case. The case also includes a DUI charge for Jude.

As in the example above, all of the defendants in a case do not need to be charged in each count. Some defendants may be charged with more or different crimes than other defendants.3

Prosecutors often make their joinder decision at the beginning of a case before the arraignment. They usually name all the co-defendants in the initial charging documents (either an “indictment” or an “information”). But courts may elect to join defendants after the case has been ongoing.4

In some situations, a defendant could benefit from defending against multiple charges in the same case; if the state’s evidence is weak on one charge, it could cause the jury to be skeptical of the other charge(s) as well.

Defendants can file “motions to sever” when joinder is prejudicial to their cases.

Having joined offenses or defendants can be very harmful (“prejudicial”) to the defendant:

If the state’s evidence is strong on a particular charge, it may cause the jury to presume that the defendant is guilty on all the other charges as well. In other words, “the domino effect.”

Or if a co-defendant appears guilty, it may cause the jury to believe the joined co-defendants are guilty as well. In other words, “guilty by association.” Furthermore, the co-defendants may have conflicting interests and may present different defenses; these differences could, in turn, hurt each other’s cases.

Also, the D.A. may use joinder to try to overwhelm a defendant into a position of weakness: By making a criminal case as big as possible with multiple defendants and/or charges, the D.A. could succeed in pressuring a defendant into accepting a plea bargain instead of fighting the case.

The court should grant a motion to sever “only when there is a serious risk that a joint trial would compromise a defendant’s specific trial right, or preclude the jury from reaching a reliable verdict.”6

Note that motions to sever must be filed with the court at least 10 days before the trial unless a good reason exists.7 And if the trial court refuses to grant severance, the defendant can always appeal to a higher court. The Nevada Supreme Court may overturn guilty verdicts when it finds that the trial judge “abused its discretion” by not granting severance.8

Note that the Nevada Supreme Court has ruled that there is one particular instance where a severance of charges is mandatory: If a defendant faces more than one charge that includes possession of a firearm by an ex-felon, the possession charge must be prosecuted in a separate case from the other charges.9

Have you been arrested or charged with a crime in Nevada? Call now. Our Las Vegas criminal defense attorneys are available for a consultation to discuss how we may be able to dismiss or reduce your charges or win a full acquittal at trial.

If you are charged with multiple charges and/or with multiple co-defendants, we will determine whether the joinder could be prejudicial to your case. And if so, we will fight to get your case severed.