Welfare fraud in Nevada occurs when a person intentionally misrepresents or omits material information in an effort to obtain welfare benefits to which he or she is not entitled.

Depending on the case, welfare fraud can be prosecuted in state or federal court, or both.

A single act of welfare fraud is usually prosecuted as a category E felony. This carries probation. But if the defendant has two or more past felony convictions, the judge can order:

If the defendant is convicted on federal charges, the penalties may include hefty fines and time in Federal Prison depending on the offense.

Standard defenses in NRS 422A cases include taking the position that:

In many cases, Nevada prosecutors are open to plea bargaining charges down to a more minor offense or even a dismissal.

1. What is welfare fraud in Nevada?

Nevada’s legal definition of “welfare fraud” is extremely broad and encompasses dozens of possible offenses committed by benefits recipients and applicants. Just a few of the more common crimes include the following:

Welfare office employees can face fraud allegations as well. This typically occurs if they input incorrect information in order to give benefits to an ineligible applicant or to deny benefits to an eligible one.1

Note that the term “welfare” comprises various state and federal need-based programs, such as:

Nevada’s Division of Welfare and Supportive Services of the Department manages and administers these public assistance programs.

Welfare fraud can be both a state as well as a federal crime.3 Depending on the particularities of the case, the FBI typically charges welfare fraud suspect with such fraud offenses as mail fraud and/or wire fraud.

In practice, most criminal cases are prosecuted in either state or federal court. But it is legal for a suspect to face charges in both courts for the same alleged offense.4

2. What are the defenses to welfare fraud in Nevada?

Common defense strategies used to fight allegations of defrauding the Welfare Department include:

The prosecution bears the burden to prove guilt beyond a reasonable doubt. If the attorney can show the prosecutor that there is insufficient evidence to meet this high standard or proof, the case may be dismissed.

Like any bureaucracy, the welfare department is a slow-moving, understaffed agency that makes mistakes. Criminal defense attorney Michael Becker provides an example of how a government error can result in criminal charges for a welfare applicant:

Useful evidence in situations like the above example would be the caseworker’s records and the communications between the welfare applicant and the agency. Once the prosecutor sees that the mistake likes with the government and not the applicant, the case should be dismissed.

Violating NRS 422A is a “specific intent” crime. This means that no defendant should be convicted unless he/she had the intent to defraud. Therefore, a typical defense is that the defendant did not deliberately try to deceive anyone.

Example: Catherine applies for welfare in Henderson. By accident, she types one too few zeroes so it appears Catherine is earning ten times less than what she really earns. If caught, Catherine may be arrested and booked at the Henderson Detention Center for violating NRS 422A. But if the defense attorney can show that Catherine made an innocent mistake, the charges should be dropped.

Some Nevada judges may go easy on distressed welfare applicants such as Catherine in the above example. The welfare system is very daunting and requires confusing paperwork, so courts expect that law-abiding people may commit unintentional errors.

Prosecutors amass evidence through police searches and seizures. If the police may have performed an illegal search (such as by not getting a search warrant when one was necessary), the defense attorney would file a motion to suppress evidence with the court.

If the court grants the motion, all the illegally obtained evidence will be excluded from the case.5 And then the D.A. may have no choice but to dismiss the case for lack of proof.

3. What are the penalties for welfare fraud in Nevada? 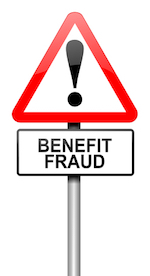 Nevada welfare fraud offenses are typically punished as a category E felony, carrying probation. But if the defendant has two or more past felony convictions, the judge may impose the following punishment for welfare fraud:

The defendant may also be ineligible for future welfare benefits.

Below are the sentences for federal crimes that may be charged in welfare fraud cases.

4. Can I get my welfare fraud case sealed in Nevada?

A person convicted of a category E felony for violating NRS 422A can usually petition for a Nevada record seal two (2) years after the case ends.7 But if the case gets dismissed (so there is no conviction), the record seal process can begin right away.8

Note that federal criminal convictions can never be sealed (with some exceptions).

5. Can welfare fraud get me deported?

Yes, the Department of Homeland Security has indicated that welfare fraud is a deportable crime.9 Therefore, Non-U.S. citizens arrested for NRS 422A charges in Nevada should retain an attorney skilled in both immigration law and criminal defense. The attorney would try to convince the prosecutor to either drop the charges or change them to non-removable offenses.

If you have been arrested for welfare fraud in Nevada, contact our Las Vegas criminal defense lawyers for a consultation. We may be able to negotiate the charges down, or else we will fight zealously for a “not guilty” trial verdict.

Arrested in California? Go to our article on California welfare fraud law.

Arrested in Colorado? Go to our article on Colorado welfare fraud law.