Arrested in a Riot or a Rout in Nevada? – 3 Legal Defenses

NRS 203.070 is the Nevada law that prohibits rioting and routing. Routs are less serious than riots, though both carry potential jail time. The statute states:

1.  If two or more persons shall meet to do an unlawful act, upon a common cause of quarrel, and make advances toward it, they commit a rout, and are guilty of a misdemeanor.

2.  If two or more persons shall actually do an unlawful act of violence, either with or without a common cause of quarrel or even do a lawful act, in a violent, tumultuous and illegal manner, they commit a riot, and are guilty of a misdemeanor.

The recent “Occupy” movement has increased police vigilance of potential riots. In the fray of a riot, it’s not uncommon for peaceful protesters to be wrongly arrested. But an experienced Nevada criminal defense attorney may be able to get their charges dismissed so their records remain clean.

In this article, our Las Vegas criminal defense attorneys summarize the Nevada crimes of “routing” and “rioting” under NRS 203.070. Scroll down to learn the law, defenses, and punishments. 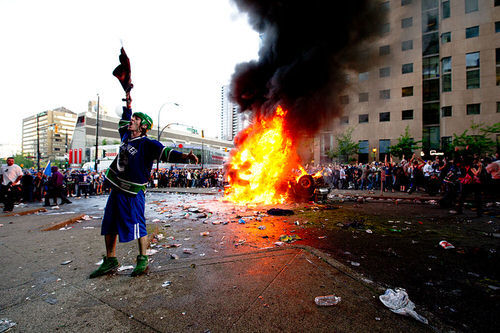 Rioting and routing is a misdemeanor under NRS 203.070.

Definition of routing and rioting under NRS 203.070

The legal definition of a “rout” in Nevada is when “two or more persons meet to do an unlawful act, upon a common cause of quarrel, and make advances toward it.”  In other words, a rout is when people assemble to break the law and take steps to break the law, but no law ends up getting broken.

Example: Several UNLV students congregate on campus to vandalize the quad to protest tuition hikes.  They discuss what to do and take out their spray cans, but they disperse when they see the police show up.  Even though the quad remained untouched, the students would probably still be booked at the Clark County Detention Center Their actions of meeting up to protest tuition hikes and taking out their spray cans would be sufficient to qualify as a rout.

Had the students in the above example never taken out their spray cans, the prosecution would have a hard time convicting them of a rout . . . this is because the students may have met for the purpose of vandalizing the quad, but arguably they didn’t “make any advances towards it.”

However, note that the students in the above example could still be convicted of unlawful assembly (NRS 203.060) even if they never took out the spray cans.  Unlawful assembly is when “people assemble to break the law and then separate without advancing towards it.”

The legal definition of a “riot” in Nevada is when “two or more persons do an unlawful act of violence in a violent, tumultuous and illegal manner.”  One of the most notorious examples is the Rodney King riots in L.A., where people broke store windows and looted merchandise.

Note that riots are not simply routs that turned violent.  Routs involve people who assemble “upon a common cause of quarrel” and who intend to break the law.  Contrarily, people may be convicted of rioting even if they’re acting up for different purposes and have no intention of committing a crime.

Note that Sam and Simon in the above example would also face additional charges for any violent crimes they commit such as assault (NRS 200.471) and reckless endangerment (NRS 202.595).

The primary defense to a routing charge in Nevada is that the defendants never took any steps to break the law.  Simply assembling for a lawful purpose such as an Occupy protest is perfectly legal as long as they’re not trespassing or otherwise disturbing the peace.

The primary defense to a rioting charge in Nevada is that the defendants were innocent bystanders mistaken for rioters or that their fighting was justified self-defense. Standard evidence used in these types of cases includes eyewitnesses and surveillance recordings.

Note that no defendant may be convicted of routing or rioting unless the judge or jury believes that they were guilty beyond a reasonable doubt.  That’s a very high burden of proof that prosecutors need to meet.  So as long as the defense attorney can show that the state’s evidence is insufficient to support a guilty verdict, the charges should be dropped.

Routs and riots are punished as a misdemeanor in Nevada. The sentence is:

Note that defendants convicted of misdemeanors need to wait another year before the court may seal their criminal record. But if the defense attorney gets the charges dismissed or gets an acquittal at trial, then the defendant may petition to seal the record right away.  Learn more about sealing criminal records.

If you’ve been accused of rioting or routing under NRS 203.070, Las Vegas criminal defense attorneys can meet with you for a consultation.  They may be able to negotiate a dismissal and get the whole case dropped.  Otherwise, they’re prepared to fight for a not guilty verdict at trial.