NRS 202.170 is the Nevada law that prohibits deliberately poisoning food, drinks or medicine intended for human consumption. This law also prohibits putting glass, razor blades, or other harmful items in foodstuffs or drugs. The statute states:

A person who willfully mingles poison or any other harmful substance, including, but not limited to, glass or a razor blade, in any food, drink or medicine intended or prepared for the use of a human being, and a person who willfully poisons any spring, well or reservoir of water, is guilty of a category B felony and shall be punished by imprisonment in the state prison for a minimum term of not less than 2 years and a maximum term of not more than 15 years, or by a fine of not more than $10,000, or by both fine and imprisonment.

This page summarizes the Nevada crime of willfully poisoning food, drinks, medicine or water sources under NRS 202.170. Scroll down to learn about this law’s definition, how our Las Vegas defense attorneys defend against criminal charges, and possible penalties upon conviction. 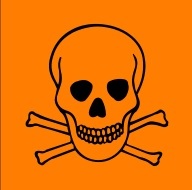 Definition of poisoning foodstuffs in Nevada under NRS 202.170

Note that a person is not criminally liable for violating NRS 202.170 if he/she did not mean to contaminate the food, drinks, water, or medicine. Boulder City criminal defense attorney Michael Becker gives an example:

Example: Ned is a busboy in Las Vegas refilling water glasses for restaurant customers. Unbeknownst to him, the falling ice from the water pitcher causes the rim of the glass to chip and shards of glass to fall into the water. If the customer complains, Ned may be initially booked by the Las Vegas police at the Clark County Detention Center for mingling glass-a harmful substance-with the customer’s water. But he should not be convicted because he had no intention of mixing the drinking water with glass.

Now things would be different if Ned in the above example realized that his actions were causing glass to fall into the drinking water: In such a case, he probably would be found criminally liable for mingling a hazardous substance with water because he did nothing to stop it or to fix it.

Murder or Attempted Murder by Poisoning

Predictably, NRS 202.170 is a less serious crime in Nevada than intentionally killing … or trying to kill … another person by poisoning. Laughlin criminal defense attorney Neil Shouse illustrates the distinction between homicide and NRS 202.170:

Example: Jo, a disgruntled employee, attends his company retreat on Lake Mead. Out of revenge, he puts arsenic in his boss’s martini glass. Then he disposes of the rest in the lake. The boss then nearly dies on the boat and the Henderson Police arrive at the scene. If Jo is caught, he would be booked at the Henderson Detention Center on two charges: attempted murder for intentionally poisoning his boss’s glass with the intent for him to die, and poisoning a water source for putting poison in the lake.

Note that Nevada has a separate law for people who unjustifiably poison animals (other than noxious animals such as a rabid dog). It makes no difference whether the defendant owns the animal, and the punishment depends on the type of animal poisoned. Learn more about the Nevada crime of animal cruelty.

Various strategies exist to fight charges for the Nevada crime of poisoning food, drinks or water. Depending on the facts of the case, the defense attorney may try to use the following defenses:

Penalties for poisoning food in Nevada under NRS 202.170

Violating NRS 202.170 is a category B felony in Nevada. The punishment includes:

Attempt to Kill by Poisoning

Attempted murder by means of poison is a category A felony in Nevada carrying a sentence of:

Murder by means of poison is a category A felony in Nevada. The punishment includes:

Poisoning horses, mules or domestic cattle is a category C felony in Nevada carrying 1 to 5 years in prison and maybe a $10,000 fine. The judge may also impose restitution in Nevada.

Otherwise, poisoning animals is a gross misdemeanor in Nevada carrying up to 364 days in jail and/or up to $2,000 in fines. The judge may also impose restitution in Nevada.

Arrested for poisoning in Nevada? Call an attorney …

If you or a loved one is facing charges for “poisoning food, water, drinks, or medicine” in Nevada, contact our Las Vegas criminal defense lawyers to discuss your options for free. We may be able to win a reduction or dismissal of your charges so your record stays clean. (For cases in California, please visit our page on Penal Code 347 PC – Poisoning food, water or medicine in California.)

1) Dogs are “dangerous” if they have bitten or been aggressive two times in 18 months A Clark County Animal Control officer can declare a dog dangerous if – on two separate occasions in an 18-month period – the dog: Behaved menacingly to a degree that would lead a reasonable person to defend him/herself against ...

Does Las Vegas have a vagrancy law?

The City of Las Vegas has a new vagrancy law under 10.86.010 called the encampment ordinance. This new law makes it a misdemeanor for people to sleep or otherwise camp out in certain areas if there is space available at shelters. Penalties under this new ordinance include up to 6 months in jail and/or up ...