Counterfeiting official seals -- or using genuine seals without permission -- is a type of forgery in Nevada under NRS 205.175. Most types of seal forgery are prosecuted as a category D felony in Nevada, carrying:

Meanwhile, making or selling a counterfeit police badge is a gross misdemeanor in Nevada, carrying:

However, it may be possible to get these charges reduced or dismissed through a Nevada plea bargain. Potential defenses to NRS 205.175 allegations include:

In this article, our Las Vegas criminal defense attorneys discuss the Nevada crime of counterfeiting seals. Click on a topic to jump to that section:

Counterfeiting official seals is a form of forgery in Nevada.

It is against Nevada law to use a fraudulent official seal without authorization. Specifically, NRS 205.175 prohibits the following five actions:

In short, it is illegal to make a fake seal, use a fake seal, or to put a real seal on a document without permission. NRS 205.175 also prohibits forging the signature of a "public officer," which comprises any elected or appointed government official.1

2. Penalties for "seal forgery" in Nevada

Forging the Nevada state seal is a felony.

An NRS 205.175 violation is typically punished as a class D felony, carrying:

However, the following three NRS 205.175 violations are instead punished as only a gross misdemeanor:

However, the defense attorney and prosecutor may agree to a plea deal where the charges get reduced or possibly dismissed.

3. Defenses to "seal forgery" in Nevada

NRS 205.175 is an extremely broad offense, so the best defense strategies hinge on the unique facts of each case. Common arguments to fight forgery charges may include:

If the defense attorney can convince the prosecutor that the state has insufficient evidence to sustain a guilty verdict, the prosecutor may agree to a favorable plea deal or a full dismissal. 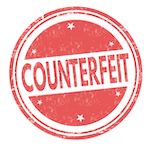 Forgery is potentially a deportable crime.

An immigration judge could consider an NRS 205.175 violation to be a crime involving moral turpitude because it requires fraudulent intent.3 Therefore, non-U.S. citizens who face forgery charges should retain an attorney to try to have the case dismissed or reduced to a lesser offense that is not deportable.

People convicted of a category D felony must wait five (5) years after the case ends before asking the court to seal the case. But the waiting period is only two (2) years if the conviction was for a gross misdemeanor.4

Note that there is no waiting period to pursue a record seal if the defendant was acquitted at trial or if the prosecutor dismissed the case.5

The sentence for Nevada fake ID crimes turns on the circumstances of the case:

The Nevada crime of false impersonation occurs when a person falsely represents him/herself as someone else when either:

In addition, the defendant must pay the victim restitution in Nevada (if applicable).

The Nevada crime of forgery occurs when someone intentionally attempts to defraud another via falsified documents. As with counterfeiting seals, the sentence is:

If you are facing criminal charges in Nevada, please call our Las Vegas criminal defense attorneys at 702-DEFENSE (702-333-3673) for a FREE consultation. Our mission is to do everything possible to fight for a charge reduction or acquittal. And if necessary, our experienced courtroom attorneys will take your case all the way to trial and advocate zealously for a "not guilty" verdict. Meanwhile, we are here to hold your hand through the entire process so you remain informed, empowered, and confident that you are receiving the best representation available.

Arrested in California? See our article on the California crime of forging, counterfeiting, or possessing a fraudulent public seal | California Penal Code 472 PC.

Arrested in Colorado? See our article on Colorado forgery laws.