The California dog bite attorneys at Shouse Law Group help bite victims to bring lawsuits. We can help you recover damages for

California dog bite law imposes strict liability on the owners. This means the owner of any dog that bites you faces liability in a civil lawsuit for your injuries even if

This contrasts with the common law “one bite rule,” in effect in other states, by which the owner is liable only if the dog has bitten someone before or has displayed violent tendencies.

California sees more dog bite lawsuits than any other state. California also ranks first for dog attacks on postal workers (782 in 2020 alone).1 Our attorneys assist victims across the state to file claims in dog bite and dog attack cases. 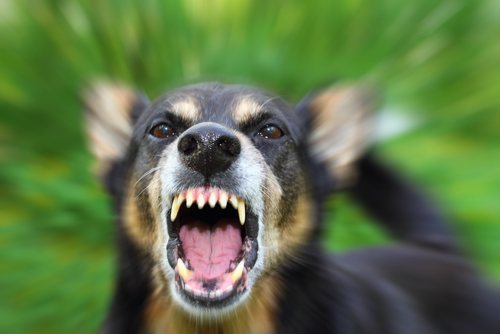 California canine bite laws impose strict liability on pet owners even if your skin is not broken from the bite.

1. How can a California dog bite lawyer help me?

A dog bite lawyer can

Fortunately, California has favorable laws that protect victims and make owners liable for injuries caused by their dogs.

Trespassers bitten by canines in California generally are not able to recover damages.

After a dog bite attack in California, you should:

If you cannot get owner information, contact the local Animal Control with a description of the dog.

2. Who is ineligible to sue in California?

According to Los Angeles dog bite attorney Neil Shouse, you will likely not recover damages for canine bites in California if:

3. How much can I sue for a dog bite in California?

If you have been bitten by a dog in California, you may be entitled to compensation for your injuries from the wrongdoer’s insurance company. Compensatory damages that our California dog bite lawyers pursue may include:

If the animal attack resulted in a fatality, families may be able to recover wrongful death damages or damages for loss of consortium in California.

Note that there are six grades of dog bites according to the Dunbar Bite Scale:

You may be eligible for damages no matter your dog bite level. See our page on dog bite lawsuit payouts.

4. Can I get punitive damages for a dog bite in California?

To recover punitive damages in a dog bite case, you must prove by clear and convincing evidence that the defendant’s actions amounted to “oppression, fraud or malice.”4

“Malice” occurs when the defendant acted “with a willful and conscious disregard of the rights or safety of others.”

Few dog bite cases in California have made it to the appellate courts, which establish a precedent for the lower courts.

However, there is nothing in the law that prevents a court from awarding punitive damages in a dog bite case.

If the bite victim was a minor (under 18 years of age), please see our page on compromising a minor’s claim in California.

5. What if I cannot afford a doctor?

If you do not have health insurance, you may be able to find a doctor willing to work on a medical lien in California.

Our California dog bite lawyers work with a number of doctors willing to provide medical attention to victims of dog bites on a California medical lien basis.

And if you have already found a doctor willing to work for a lien, we can help you negotiate the agreement so that you are not on the hook for huge medical bills if it turns out the dog’s owner does not have insurance or assets.

Some states (such as Nevada) follow a so-called “one bite rule”. These states do not impose liability for bites unless the owner is on notice that the canine has previously bitten someone or is otherwise dangerous.

California law imposes strict liability laws in canine attack cases. This means that you do not have to prove

In strict liability lawsuits that proceed to trial (which is rare since most cases settle), you have the burden to prove these four elements:

However, if a canine has bitten someone before, state law does impose an extra duty of care on the animal’s owner. Such an owner must take all reasonable steps to prevent other people from suffering bites.6

If you get bitten by a potentially dangerous or a vicious dog – and the owner did not take precautions to keep the dog from hurting others – your legal case against the owner could be strengthened.7

Note also that with respect to cat bites, California law does impose a standard similar to the one-bite rule.

7. Do I need to file a police report in order to sue?

No. Though it may be easier to get punitive damages if a local animal control officer has

Plus it may put the owner on notice so that the owner can take steps to ensure the safety of others.

Furthermore, California law requires both owners and dog bite victims to report canine bites to your local county health officer. As well, doctors in California are obligated to report dog bites for which they provide treatment.

Reporting a canine bite to the county health officer does not mean the owner will be prosecuted under California’s criminal laws. Usually, the county just wants to make sure that the canine does not carry the rabies virus.

8. Will the dog that bit me go into quarantine?

California’s quarantine laws require animals who have bitten you to be quarantined, usually for ten (10) days.8 During this time, the county will ensure that the canine does not carry the rabies virus.

If the animal remains healthy during the quarantine period, authorities will release it back to the owner’s care.

Such canines can be

The process of seeking euthanasia for a canine who bites can be initiated by any concerned individual – including, without limitation, the bite victim, a government official or even a neighbor.

Many renters’ and homeowner’s insurance policies cover personal injury claims for dog bite injuries. The typical coverage range is $100,000 to $300,000.

According to the Insurance Information Institute, canine bites are the most common liability claim on

Some companies exclude liability coverage for animals of certain breeds considered to be the most dangerous.

With an average payout of almost $40,000 per dog bite claim, it pays for owners to ask about breed restrictions when they are shopping for insurance.11

Breeds that are often subject to restrictions include:

11. How long do I have to sue for a dog bite in California?

The statute of limitations (time deadline) for an injured person to sue in California is two years.12 The two-year period starts running on the date the bite or attack occurs.

If you fail to file your lawsuit within the two-year period, you usually cannot recover damages – even if you have been unable to identify the animal owner during this time period but later do so.

12. What if a dog attacked me but did not bite me?

If you were injured by a canine but not bitten, you will generally need to show that the owner was negligent.

However, if the owner or handler violated a state or local statute meant to protect public health and/or safety, they will automatically be deemed at fault under California’s law on “negligence per se.”13 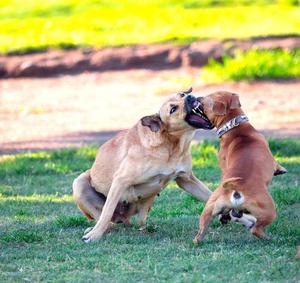 Dog fighting is a criminal offense per Penal Code 597 PC.

Yes, but not under California’s canine bite statute. Civil Code 3342 covers injuries to people. It does not allow you to sue when a dog bites another dog in California.

Under California law, canines are considered the personal property of their owners.14 Therefore when your canine is “damaged,” the usual cause of action is one for property damage (or a more obscure legal theory known as “trespass to chattels”).

The traditional measure of damages recoverable in a property damage lawsuit is the lesser of:

What damages can I get if my dog is bitten?

In recent years, California courts have begun acknowledging that a reduction in market value may not be the most appropriate measure of damages when a pet is injured.

Instead, you may be entitled to amounts you reasonably spent trying to “repair” the property (for example, veterinarian’s bills). The question is whether the amounts spent by the owner were reasonable.16

You may also be to get compensation if the other owner was convicted of animal cruelty charges. In such a case the court may award victim “restitution” as part of the owner’s sentence.

However, victim restitution for property damages is usually just the cost of repairing or replacing the damaged property.17

Can I get punitive damages in a “dog bites dog” case?

Yes, although such cases are rare. California law permits recovery of punitive damages if the owner or handler acted with “malice” – for instance, if they wrongfully ordered the animal to attack.18

14. Can I press criminal charges?

Ultimately, it is up to the local District Attorney to decide whether to bring criminal charges against the owner of a canine who bites you in California.

Possible criminal charges against the animal owner include (but are not limited to):

If the victim dies, dog owners can even face criminal charges for manslaughter or even murder.

For more information on these crimes, please click on the appropriate link above or call our office for a consultation with one of our California dog bite lawyers.

15. What are defenses to lawsuits in California?

Defenses to animal bite lawsuits can vary a great deal, depending on the facts of the case. Common defenses to dog bite injury claims include:

It is not a defense that you were a strong, able-bodied adult. Both adults and children are eligible for dog bite damages despite age, build, or vulnerabilities/disabilities.

Note that children five and under cannot be negligent. So even if a small child was provoking a dog, its owner cannot use the child’s provocations as a defense to biting the child.21

Our California dog bite attorneys have a very high success rate. Call us for a consultation and case evaluation about your personal injury case and legal rights.

Shouse Law Group operates by contingency fee in dog bite cases. So our California dog bite lawyers do not get payment unless we win your case. That keeps it risk-free for you.

We settle the majority of cases through an out-of-court negotiation. We work as quickly as possible to recover the monetary compensation you deserve. If necessary, we are ready to take your matter to trial in pursuit of the maximum jury verdict under the law.

Our personal injury attorneys have offices and provide legal representation throughout the state of California, including in Los Angeles, Orange, Ventura, San Bernardino, San Diego and Riverside Counties, as well as Central and Northern California. To discuss creating an attorney-client relationship and for legal advice, call us or fill out our contact form.