Civil Code 3342 is the California dog bite statute. This section outlines when owners are responsible for injuries caused by their dogs.

Unlike other states, California holds dog owners strictly liable for dog bites. This means they generally must compensate victims even if their dog showed no prior signs of aggression.

3342. (a) The owner of any dog is liable for the damages suffered by any person who is bitten by the dog while in a public place or lawfully in a private place, including the property of the owner of the dog, regardless of the former viciousness of the dog or the owner’s knowledge of such viciousness. A person is lawfully upon the private property of such owner within the meaning of this section when he is on such property in the performance of any duty imposed upon him by the laws of this state or by the laws or postal regulations of the United States, or when he is on such property upon the invitation, express or implied, of the owner.

(b) Nothing in this section shall authorize the bringing of an action pursuant to subdivision (a) against any governmental agency using a dog in military or police work if the bite or bites occurred while the dog was defending itself from an annoying, harassing, or provoking act, or assisting an employee of the agency in any of the following:

(1) In the apprehension or holding of a suspect where the employee has a reasonable suspicion of the suspect’s involvement in criminal activity.

(2) In the investigation of a crime or possible crime.

(3) In the execution of a warrant.

(4) In the defense of a peace officer or another person.

(d) Subdivision (b) shall apply only where a governmental agency using a dog in military or police work has adopted a written policy on the necessary and appropriate use of a dog for the police or military work enumerated in subdivision (b).”

There are exceptions to a dog owner’s liability, though. Some of them are found in Civil Code 3342, itself. Some of these defenses are when: 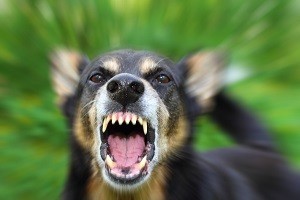 California Civil Code 3342 makes a dog owner strictly liable for their dog’s bites if they happened in public.

1. What is California’s dog bite statute?

California’s dog bite statute is California Civil Code 3342. This statute makes a dog owner strictly liable for their dog’s bites if they happened in public or where the victim had a lawful right to be.

To prove a case under California’s dog bite statute, dog bite victims have to show:

1.1. What does strict liability mean?

Strict liability is a legal concept. It holds people liable for their conduct, even if they were not negligent.

Example: Joel is abiding by all of the rules of the road. He slides on a patch of ice and into Katrina’s parked car.

Under strict liability, though, victims do not have to prove negligence. Even if the defendant had taken all possible precautions, they can still be made to pay for an accident simply because the accident happened.

Example: Danielle’s dog Dillon is tame and docile, but she puts him in a crate before dinner guests come over. Somehow, Dillon bites through the wall of the crate and bites one of the guests.

1.2. What does it mean to be in a “public place or lawfully on private property”?

Victims have to be in public or lawfully on private property to utilize California’s dog bite statute.

A public place is anywhere that is accessible to the general public. It includes:

Examples of people who are performing a legal duty under state or federal law include:

Invitations to come onto the property can be expressed or implied. They can also be limited to certain parts of the home. Victims who stray beyond the bounds of their invitation can become a trespasser.

Example: A 5-year-old with his mother on a visit is told not to go into the back yard. He does and gets bitten by a dog.2

California’s dog bite statute holds dog owners strictly liable for all dog bites, no matter how minor. The victim’s skin does not need to get punctured by the bite.3

Example: A roofer is climbing a ladder when the resident’s 5-month old dog bites him ankle. The bite does not pierce the roofer’s skin, but it does make him fall from the ladder.4

1.4. Is Civil Code 3342 the only way to recover compensation for a dog bite in California?

Civil Code 3342, however, is the easiest case to prove. It does not require proof that the owner did anything wrong. All that you have to show is that you were bitten and were protected by Civil Code 3342.

One bite laws only impose strict liability on dog owners only once they know of their dog’s tendency to bite people. Because this usually requires showing that the dog has already bitten someone, dogs in states that use one bite rules are said to get one free bite. 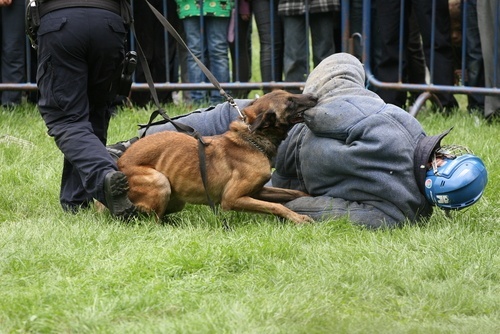 Police dogs are an exception to a dog owner’s strict liability.

3. What are the exceptions to a dog owner’s strict liability?

Civil Code 3342 includes several exceptions to its strict liability rule. Dog owners who can show that one of these exceptions is in play can avoid being held strictly liable for their dog’s bite.

3.1. The victim was trespassing

Trespassers can, however, still recover compensation by showing the dog owner was negligent or knew the dog was dangerous.

Bites by dogs that are being used by a government agency for military or police work according to a written police policy do not subject the government to strict liability if:

However, if the dog bites an innocent bystander in any of these situations, it can lead to strict liability.8

3.3. Assumption of the risk – the “veterinarian’s rule”

Assumption of the risk is a defense to strict liability for a dog bite under Civil Code 3342.9 This is the veterinarian’s rule.

Professionals who have assumed the risk of a dog bite and cannot use the dog bite statute to recover compensation are:

These professionals can still claim that the dog owner should be held liable because they were negligent. They just cannot rely on strict liability to hold the owner accountable.

A defense to strict liability for a dog bite under Civil Code 3342 is that the victim was partially to blame.12

California’s comparative fault rules require juries in dog bite cases to assign fault to the dog and the victim. Any responsibility that the victim had for the bite reduces the damages that victims can recover. Victims can be partially at fault for a dog bite if they…

…the dog that bit them.

Example: Andrea hates dogs. She is throwing rocks at one when it attacks her and bites her. Andrea suffers $10,000 in damages, but a jury finds her 45% at fault. She can only recover $5,500 in compensation.

For help in bringing a dog bite lawsuit and to seek a settlement, contact us at Shouse Law Group. Our California dog bite lawyers can help. Contact us today to get started.

A felony arraignment hearing is normally the first formal court appearance in criminal cases where a defendant is charged with a felony offense. In most jurisdictions, these hearings are when courts inform defendants of the crime(s) filed against them, advise defendants as to their constitutional rights, address issues of bail and release from custody, and ...

As many court dockets get clogged with the number of DUI cases, especially amidst the COVID-19 pandemic, more of them are getting plea bargained. Typically this means a reduction of the charge to a wet reckless, dry reckless, misdemeanor exhibition of speed, or even a traffic infraction. 1. What is the California crime of DUI? ...

Can petty theft charges be dropped?

Yes, in some cases, petty theft charges can be dropped. Defendants can complete a pretrial diversion program, take a plea bargain that reduces the charges, or present prosecutors with exculpatory evidence. All of these strategies often require the legal advice and representation of a theft attorney. They all keep a costly conviction from appearing on ...