Becoming a U.S. citizen through naturalization in Nevada

Foreigners may be eligible to become naturalized citizens of the U.S. once they have lived in the U.S. as a legal permanent resident for at least five years (or three years if married to a U.S. citizen). In order to take the citizenship oath in Nevada, they have to have lived in-state for at least three months. Naturalized citizens have all the same rights and privileges of U.S.-born citizens.

Below our Las Vegas Nevada naturalization and citizenship lawyers answer frequently-asked-questions about the process and benefits of becoming a U.S. citizen in Nevada. Click on a topic below to go directly to that section.

For maintaining citizenship in the U.S. as well as a foreign country, see our article on dual citizenship. 1. Am I eligible for naturalization?

The process through which a foreign citizen gains citizenship in the U.S. is known as naturalization. The Immigration and Nationality Act (INA) spells out the necessary requirements for naturalization. In general, foreigners who fit any of the following categories may be eligible to become U.S. citizens:

The majority of aspiring U.S. citizens first come into the U.S. on an immigrant visa, which allows them to enter and reside in America for a certain period of time. Depending on the visa requirements, after a specified time frame the visa-holder may apply for a green card to become a legal permanent resident. Once he/she has lived in the U.S. for a certain period of time, they may be eligible for naturalization.

2. How long do I have to live in the U.S. before I can get naturalized?

Legal permanent residents may be eligible to become naturalized once they have lived in the U.S. as an LPR for five (5) years, or else three (3) years if they are married to a U.S. citizen. 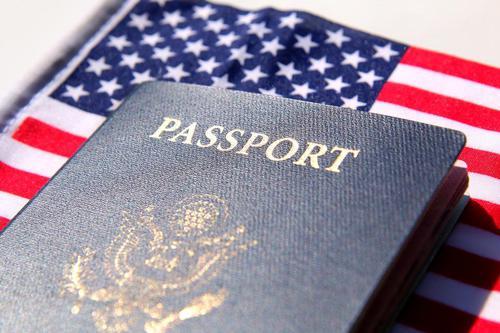 3. How long do I have to live in Nevada to get naturalized in Nevada?

People eligible to become U.S. citizens may take the oath of citizenship in Nevada if they have been living in Nevada for at least three (3) months.

4. What is the application process for becoming a U.S. citizen?

A legal permanent resident applying to become a citizen must complete and submit the N-400 Form with the USCIS (U.S. Citizenship and Immigration Services). As part of the application process, the individual will be required to do the following:

5. What is the time frame for applying for U.S. citizenship?

An average of six months.

6. What is the fee for applying for U.S. Citizenship?

$640 plus an $85 biometrics (fingerprinting) fee (applicants 75 years old or older are exempt from the biometrics fee). Note that military applicants filing under INA sections 328 or 329 pay no fee.

Fees paid by money order, personal check, or cashier’s check must be made payable to the Department of Homeland Security.

7. What happens after my naturalization application is approved?

When attending the ceremony, the individual can expect to do the following:

The individual will likely attend one of two types of naturalization ceremonies: a judicial ceremony or an administrative ceremony. In the former, the court administers the Oath of Allegiance; in the latter, USCIS personnel administers the oath.

8. What are the benefits of U.S. citizenship?

Ten of the primary benefits of holding U.S. citizenship include the rights to do any or all of the following:

9. Will a criminal record prevent me from naturalizing?

It depends. Some offenses permanently prevent a foreigner from becoming a citizen. These include the Nevada crime of murder as well as aggravated felonies (committed after November 29, 1990), some of which are:

Several offenses only temporarily bar citizenship, usually for an extra three to five years. Examples of these offenses include:

Working with our Las Vegas Nevada naturalization and citizenship lawyers will ensure that you complete all that is required of you in order to be granted naturalization. It is in your best interest to work with an attorney who is knowledgeable in the law and will provide you with the proper representation. Call our Las Vegas immigration attorneys for a consultation.

Foreigners may be eligible to become naturalized citizens of the U.S. once they have lived in the U.S. as a legal permanent resident for at least five years (or three years if married to a U.S. citizen). In order to take the citizenship oath in Nevada, they have to have lived in-state for at least ...