NRS 381.225 is the Nevada vandalism crime law that prohibits defacing historical sites. These include both man-made sites (such as a building) or natural sites (such as Indian caves). Specifically, this statute reads that:

It is unlawful for any person to commit vandalism upon any historic or prehistoric sites, natural monuments, speleological sites and objects of antiquity, or to write or paint or carve initials or words, or in any other way deface, any of those objects, Indian paintings or historic buildings.

The punishments turn on the extent and type of the damage:

But the D.A. may agree to reduce or dismiss the charges through a Nevada plea bargain. Possible defenses include:

In this article, our Las Vegas criminal defense attorneys discuss the Nevada crime of vandalizing historical sites under NRS 381.225: 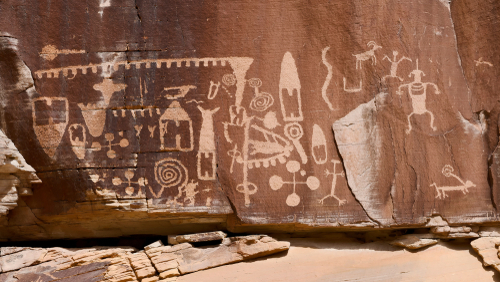 NRS 381.225 makes it a crime in Nevada to deface historic sites.

1. Definition of defacing historic sites in Nevada under NRS 381.225

NRS 381.225 makes it a crime to vandalize, deface, or write or paint or carve initials or words on either:

It makes no difference whether these places or objects are in a national park, open to the public, and/or cordoned off. Any action that changes the appearance, structure, or nature of these sites is against Nevada law.1

Note that people accused of putting graffiti on a historic site would probably be charged under Nevada graffiti law (NRS 206.330).

Also note that people accused of defacing historic sites on federal probably would probably face federal rather than state charges for the destruction of federal property under 18 U.S.C. § 1361.

Defacing a historic place in violation of NRS 381.225 is prosecuted as a category C felony if the damage impairs either:

The monetary value of this type of damage is irrelevant to calculating the sentence, which is always:

When no damage to public infrastructure occurs, the penalties for violating NRS 381.225 turns on the extent of the monetary damage:

An NRS 381.225 violation can be a felony, misdemeanor, or civil infraction depending on the case.

Causing damage worth at least $5,000 is a category C felony, carrying:

Causing less than $25 worth of damage to a place of historic significance carries a maximum civil fine of $500.2

People accused of violating NRS 381.225 may be able to get the charges dropped by making the following arguments:

And even if prosecutors refuse to drop the charge, they may agree to lower it by showing that the damage is less extensive than what they originally charged.

Perhaps someone levied false allegations against the defendant just to get him/her in trouble with the law. Or perhaps any damage that occurred was from natural causes such as a forest fire or windstorm, and the defendant was in the wrong place at the wrong time.

As long as there is insufficient evidence to prove beyond a reasonable doubt that the defendant committed vandalism, criminal charges should not stand.

Maybe the defendant’s actions did not rise to the level of vandalism: For instance, merely touching or pouring water on a site or monument is usually not illegal.

Helpful evidence would include any video recordings or eyewitness testimony. If the defense attorney can demonstrate that the defendant did nothing illegal, the charge should be dismissed.

3.3. The site was not historic

NRS 381.255 applies only to certain historic and prehistory sites and monuments. If the defense attorney can show that the location of the alleged offense does not fall under the umbrella of places protected by this statute, the charges should be dropped. (However, the defendant may still be able to be charged with other vandalism offenses.) 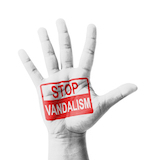 It is possible but unlikely that vandalism is a deportable offense.

Defacing historical sites is probably not a deportable offense in Nevada. But this is not a sure thing, especially with the rapidly shifting state of immigration law.

Any non-citizen facing criminal charges in Nevada is urged to retain an experienced attorney right away to try to ensure that their case does not jeopardize their resident status. Learn more about the criminal defense of immigrants in Nevada.

5. Sealing Nevada records for the defacement of historic sites

A conviction for an NRS 381.225 violation is usually sealable from the defendant’s criminal record after a predetermined wait time. The length of this wait depends on what category of crime the defendant was convicted of:

Learn more about how to seal Nevada criminal records.3

Have you been accused of vandalism or another crime in Nevada? Our Las Vegas criminal defense attorneys would like to help get your charges reduced or dismissed.

We can usually achieve a favorable resolution through negotiation alone. But we are always ready to demand a trial and appeal to the jury for a full acquittal.

How much is the reinstatement fee in Nevada?

In general, the fee to reinstate a Nevada driver’s license following a DUI is $120 plus a $35 victim fee. For non-DUI cases, the Nevada DMV license reinstatement fee is $75. And if the person has to retake a driving knowledge and skills test, there is an additional fee of $10.1 Note that these administrative ...

Manufacturing a Controlled Substance – What does it mean?

Different states define the act of manufacturing a controlled substance differently. They all cover the act of producing an illegal drug, not just the possession of it, although possession may be a lesser included offense. However, courts and state laws disagree over how much alteration is necessary, whether manufacturing precursors counts, or whether the law ...

What is an “accessory after the fact” in Nevada?

Under Nevada criminal law, an accessory after the fact is a person that helps a criminal escape prosecution or a jail or prison sentence. 1. How does Nevada law define a “principal” and an “accessory”? Nevada law recognizes two types of parties to a criminal offense. These are: principals, who are the people who actually ...